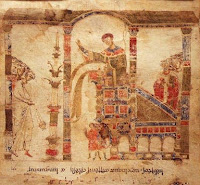 The Easter Vigil
The priest to bless the fire is dressed in sacerdotal vestments with a silk cope; deacon and subdeacon wear tunicles, the others with amice and alb. Another cleric in a surplice carries a long candlestick (hastam) with an unlit candle on it. There are no acolyte candles and the thurible is unlit. As they process to a corner of the church near the font, they say (not sing) the psalm Dominus illuminatio mea without Gloria Patri. All lights in the church are extinguished.

This hasta has a strange appearance in the wonderful diagrams in the Sarum Processionale. The top is three pronged, and it looks as if it might simply be the triple ‘reed’ familiar to the pre-1950 Vigil. Or the three prongs might simply be to hold the candle steady. Further down the shaft, however, it looks as if there is a boar’s head impaled on it, with the length emerging from its mouth.

The celebrant stands next to the fire, facing east, the deacon on his left and the subdeacon to the left of the deacon. One candlebearer stands opposite the celebrant, at his right a boy holds the book near the celebrant. To his right is the holy water bearer, and in the last place, behind everyone, to the west, stands the hasta bearer. To the south stands the thurifer, and the choir of clergy to the north. All face the celebrant.

The fire is blessed and sprinkled, and the incense is blessed at great length. Coals are placed in the thurible, then incense, and the fire is censed. The candle on the hasta is lit from the new fire. The procession moves to the Quire as two clerics sing the following hymn. The first verse is sung as a sort of chorus by the whole choir after each other verse sung by the clerics. While the clerics sing, they stand still and the rest of the procession moves on. While the choir sings, they stand still and the clerics move and catch up.

The deacon now proceeds to the blessing of the paschal candle, standing at the presbytery step facing north. He begins the Exsultet (mostly the standard ancient text). He pauses at
In hujus igitur noctis gratia suscipe, sancte Pater… to insert the five incense grains into the candle or the candlestick, and continues …incensi huius sacrificium vespertinum.

He pauses again after Sed iam columnæ huius præconia novimus quam in honorem Dei rutilans ignis accendit to allow the paschal candle to be lit. In Salisbury and, presumably, in other major churches this must have been quite a sight as it required getting a light to an enormous height. It was presumably usually lit and extinguished from the triforium, and no doubt the light had been taken there by another cleric, though the missal does not say this.

There is a note here to say that the candle must remain alight until Compline of Easter Sunday, and must be lit during the Octave at Matins, Mass and Vespers. Thereafter it is only lit at Mass, except on greater feasts, when it is lit as in the Octave.

The deacon resumes the Exsultet; there is a variant of the text in this section: there is no prayer for the Emperor, but instead, at the end we get:

The celebrant now reads the Officium (Introit) and goes to put on the chasuble, laid on the ‘altare autentica’. This seems to mean the high altar, and since there was a mention which I found late yesterday which suggested that on Good Friday the third Host was brought from the ‘altare autentica’, then it seems that on Maundy Thursday the Blessed Sacrament was simply reserved in the pyx over the high altar as usual.
There are no prayers at the foot of the altar, but simply Pater noster, then the celebrant kisses the altar with the ministers (I think this means that they are simply with him, not that they kiss the altar too) and goes to sit down. The hasta candle is taken away. Now the readings begin. of which there are not twelve, but simply four, almost identical to the Pius XII Vigil (the third reading has one more verse), which perhaps gives the latter considerably more authenticity than I had previously suspected.

Now follows the ‘sevenfold litany’ (septiformis letania), sung by seven boys in seven surplices. The celebrant takes off the chasuble and puts on a red silk cope, standing before the altar to the end of the litany. A bishop stands at the throne. The litany has all the normal saints one would expect, plus a few others; Maurice and his companions, Aldhelm, Germanus, Romanus, Brigid.
Then follows the ‘fivefold litany’, (quinquepartita letania, or letania ad fontes) sung by five deacons in five surplices, with a slightly different selection of saints, during which a procession moves off to the font in order to bless it. The acolyte leads it, vested in tunicle and carrying a processional cross, and two deacons carry the oils to pour into the font.

There is an interesting clause in the Processionale:

The font blessing is long, and at the end we have another hymn (also called a letania) sung by three senior clerics in silk copes: again there is a chorus to each verse. It would go to ‘Christ is made the sure foundation’ (but I’m sure it didn’t!)

And now the Mass begins with the Kyrie Lux et Origo, the celebrant and ministers beginning with the confiteor and omitting the initial pax.

The celebrant intones Gloria in excelsis Deo, and everybody kneels and takes off his black cloak. I think the Dominicans still do this. All the bells in the tower are rung as the Gloria proceeds.

The offertory verse is omitted, and the Mass continues paschally as normal until the Agnus and Pax, which are both omitted, but after a pause Vespers is commenced, as in the Roman ancient use.

After the postcommunion/collect, the people are dismissed with Ite missa est, alleluia.

At Vespers on Easter Sunday there is a procession to the font, solemnly carrying the oils.
Posted by Pastor in Monte at 07:51

Thanks for these interesting posts.

Is "seven boys in seven surplices" a new musical?

According to my sources the dismissal of the Mass is Ite, missa est without the addition of an alleluia. However the tone is that of alleluia as after the epistle.

Yes, the Dominicans do remove their Cappas at the incipit of the Gloria - some of them with a fine flourish, at that !

The 'boar' on the hasta is the serpent. Many medieval uses had the 'ardundina serpentina' to carry the (usually) three-branched candle in procession to the paschal candle.

It surived at Braga, according to King, to relatively modern times.

The twelve prophecies are a much older arrangement than the four. The 12 arrangement reflects the oldest series found in the Jerusalem-Armenian lectionary (see Talley pp 47 -54). Baumstark explains how the old Roman series was lost, reduced to four (hence to Sarum, Dominicans etc) and then re-introduced from north of the Alps (see 'Comparative Liturgy' pp 167 - 168).

Hope the gout has gone.

It should be noted that the shortening of the 12 Prophecies to 4 was well underway in the 10th century in some places.