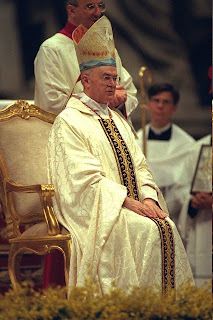 Thanks to a tip-off on the New Liturgical Movement, I discovered these recent words of Cardinal Noe:

Now we must rediscover, and quickly, the sense of the sacred in the ars celebrandi before the smoke of Satan utterly pervades the whole Church. Thanks be to God, we have Pope Benedict: His Mass and his liturgical style are an example of correctness and dignity. (my translation).

Can this really be the same Cardinal Noe who undertook the reordering of all the side altars in St Peter's, who had the Altar of the Chair smashed up, who would remove the cruets from the altars of priests whom he deemed to be attempting to celebrate the Traditional Mass……?

Is this another Vicar of Bray, or a real conversion? We must pray that it is the latter. The rest of the article repays reading, if you can read Italian. Find it here.

Many thanks, Father, for the link. Bruno Volpe is always worth reading.

I couldn't help notice the reference to an erroneous interpretation and application of Vatican II !

Perhaps Pope Benedict's speech to the Roman Curia in December 2005, condemning the hermeneutic of rupture, is finally beginning to sink in.

A genuine conversion ? Well, it seems unlikely, but you never know !

Interesting to see the Cardinal refers to Pope Paul VI as 'un santo.'

Having attempted to read the interview with limited Italian, I have just discovered an English version on Fr Z!

Given Cardinal Noe's age and health, I'm inclined to take what he says at face value. It's not as though he needs to curry favour with anyone to advance his career in the curia, for example.