It was my privilege the other day to celebrate Mass in a house of contemplative nuns. One sister approached me in a little distress just before Mass (it was the feast of the Chair of St Peter) to point out a guest-house resident who had made the most enormous fuss just before Mass because she had discovered that we wouldn't give her Holy Communion, she being Anglican. This is not an uncommon problem, and to obviate it, the sisters have made a little notice which outlines the situation charitably and carefully.

Throughout the Mass this lady (for such I assume she is) sat quivering in righteous outrage and created the most horrible atmosphere. At Communion she approached me, sidling up. She waited. I waited. She (barely) crossed her arms, and I blessed her. And that was that.

Except it wasn't. We all went out from Mass feeling, well, dirtied in some way. Certainly the Mass was spoilt for me and for Sister Euphrasia of the Paschal Candle Extinguished (for it was she) who knew of the situation. I didn't help matter by expressing my feelings to Sister Euphrasia more strongly than I should.

What is so galling is the natural assumption that we were being deliberately cruel in some way. Why does this lady assume that she can be a guest in a Catholic monastery and expect everybody to conform to her, Anglican, doctrine (or at least custom)? As Sister Euphrasia said, 'when we go to the Orthodox Liturgy, they don't give us Communion, and we don't expect it.' Is it because said lady thinks that, since she belongs to the Established Church, we all ought to conform to her views because they are naturally right, being By Law Established?

Why does she expect us to set aside what our Communion has held from the time of the Apostles (just you read St Ignatius of Antioch [c.110AD] on the subject!) because she didn't want to walk 50 yards to the Anglican Church for Holy Communion?

It didn't help that this lady is a dedicated Benedictine groupie. Triumphantly she revealed that she had been not just given but was invited to Communion at both Bec and Solesmes Abbeys. It did no good to explain the feeble half-way house that the Church has permitted reception where there is no access for a substantial time (ten years? half an hour? five minutes?) to one's own communion, when Pope John Paul II could give Communion to the still-Anglican Tony Blair, half a mile from All Saints Anglican Church in Rome. We were simply imposing our cold, cruel dogma to keep her out.

When I was a seminarian, for a few brief years we occasionally used (among a plethora of hymnals) a sort of supplement to Hymns Ancient and Modern called 100 Hymns for Today: I'm sure some readers will have encountered it. In it is a corker, called 'God of concrete, God of steel' (just imagine!) in which it lambasted 'dogmas keeping man from man' (itself a splendid own goal as the hymn aged). I also remember a visit of some exchange students from a Methodist theological college in Bristol. They came to a Fundamental Theology lecture I attended. The lecturer (called, remarkably, Michael Jackson, [no relation] by no means an arch-traditionalist) kindly explained to them at the beginning that he was addressing the subject of 'dogma'. There was a collective (somewhat camp but nonetheless genuine) gasp of horror from the Methodists. We all gazed at them, bemused.

I have received an email from Someone Who Says He Knows, saying that the freedom accorded by Summorum Pontificum to the Extraordinary Form is indeed under threat, and that the 'clarification' document is about to be signed.

This would be a very good moment to sign that petition, if you have not already done so.

I really don't know what all this is about. SP has, if anything, brought peace to this matter, and caused very little disturbance except in the minds of those who simply don't want us to be allowed it.

It's really quite simple; if you don't like the Extraordinary Form, don't go to it!
Posted by Pastor in Monte at 09:34 1 comments

These are the moving words of Deacon Edwin Barnes, formerly 'Flying' Anglican Bishop of Richborough. May God bless him in his new role, and all his colleagues.
Truly we are living in extraordinary times.
Posted by Pastor in Monte at 16:13 3 comments 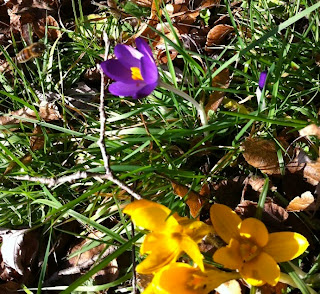 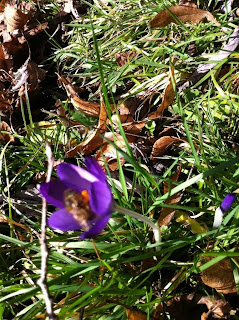 Feeling melancholy today (very badly let down by a health care professional,* and wondering whether to make a formal complaint), I happened to cast my eye out from the priests' kitchen on the first floor in the seminary and saw a flash of yellow in the grass below. The first flower of spring! I capered downstairs, suddenly lighter hearted, and saw another, purple, crocus with, glory be to God, a bee! And here he is, doing as bees do, going about his buzzness.


* Don't bother asking; I'm not going to give details.
Posted by Pastor in Monte at 18:05 8 comments 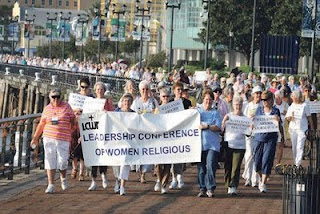 This is a picture of a meeting of Mothers General of womens' religious orders in the States (courtesy of Palazzo Apostolico). Doesn't it inspire you for the Church of the future?

Poverty, Chastity, Obedience. Well, one out of three (judging by the ages) ain't bad.

There is, I gather, another body of Superiors who employ different standards.
Posted by Pastor in Monte at 08:56 10 comments

I've been turning my mind over the last few days to this question of the sacraments of initiation.

Historically, of course, the three sacraments were celebrated in one ceremony—in Patristic times, I mean. In the east this continues, whereas in the west we have spaced the sacraments out, no doubt mostly for pragmatic reasons. When St Pius X permitted children to receive our Lord in Holy Communion once they had reached the age of reason, he made no prescription concerning Confirmation, and so it continued to be celebrated when it had been in the more recent past, which is to say, before the onset of puberty.

The change to adolescent Confirmation is a much more recent thing, and is still not done in all dioceses. My own diocese was one of the first to administer Confirmation to those 14 and over (readers won't be surprised to read that it was the initiative of the then Bishop Cormac Murphy-O'Connor). I am not one of those who see this as entirely a negative move; there are some positive features.

For a start, there is an element of Confirmation that is about conversion. Some churches in the East, I understand, will even re-Chrismate where there has been a change in one's life for the good, a turning to the Lord. To that extent, a degree of the exercise of free-will is a good thing. 14-year-olds have a degree of freedom that 10-year-olds do not have.

14-year-olds also have another thing which can be turned to advantage. They are often passionate, in every way. As the lives of the saints have shown, this is often the age when important life-decisions are made. To be part of that decision-making process is a good thing. It is often argued that this is also a very emotionally confused age, and this can be true. But messages of all sorts sink in deeply as the teenagers are trying to work out who they are; it is important that our voice be strong among these.

Catechesis at this age is a very different thing to catechesis either before or after. Information tends to go in one ear and out the other, but impressions remain strong. In my catechesis, I try to cover with the young people the normal things; the Creed, the Sacraments and the 10 Commandments. I am well aware that the kids aren't going to retain 90% of what I say. But they listen, and what I hope they will retain is an impression that the Church does have sensible things to say about what she teaches, and also the things that matter to them, and will be inclined therefore to trust her. When they were there at the meeting, I mean, the whole thing made sense, and I hope that they will remember that. It is a different method of catechesis to that employed at First Holy Communion which, realistically, is the last time that many of them ever had anything given by people who really believed this stuff.

Calm, authoritative reassurance, a preparedness to treat them as human beings with brains, an appropriate friendship, all these make teenagers inclined to trust and listen, and they can benefit far more than they would at even twelve. Only a generation ago, most 14-year olds left school and went out to work. Now they all face the prospect of continuing to live not that differently from a 9-year-old until they are 18 or more. There is no wonder that many of them get stroppy and difficult.

I hope I've made the case for a catechesis of teenagers, but that doesn't answer why it has to be accompanied by Confirmation. Well, partly it's to give them a reason to be catechized. To get them there. Yes, yes, I know that that isn't what the Sacrament is for, but neither is it contrary to the Sacrament, and, as I wrote earlier, the Sacrament does have an element of conversion, choice. Becoming a soldier in Christ's army. At my confirmation (aged 9), we sang:

Shakespeare it ain't (and the tune wasn't Mozart, either). But the implication of connecting Confirmation with Pentecost is that there is at least an element of consecration-for-mission in it.

And, after all, the Apostles were confirmed after their First Communion, weren't they?

I hope to write something on First Holy Communion soon.
Posted by Pastor in Monte at 08:59 3 comments