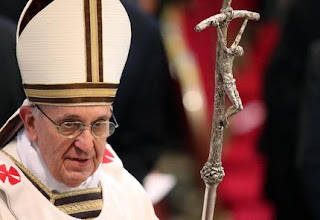 It was something of a blast from the past to see this pastoral staff, which I thought had been relegated to some store-room in the Vatican. It belonged first to Pope Paul VI. and was used by his successors until Pope Benedict changed it for another. Historically, Popes never carried croziers, and only occasionally a triple-barred cross; no doubt Paul VI felt the lack of something in his hand. Neither the cross of Paul VI nor that of Benedict were historical: I'd prefer if both were quietly dropped.
The occasion for this cross's sudden reappearance was the dedication of a large slab of the square outside the basilica of St John Lateran to the memory of Papa Wojtyla; no doubt its use suggested itself to Papa Bergoglio as being appropriate for the occasion.
Posted by Pastor in Monte at 17:39 9 comments

A Patron Saint for drug addicts? 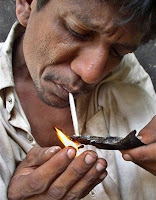 I have been carefully trawling through the Martyrology recently—well, the night life scene in the Valle Adurni isn't exactly hopping—and, in the entry for 7th July have come across one Saint Mark Ji Tianxiang. He lived in a town that the Martyrology optimistically renders as Ueihœivénse in the Hebei province of China and, though Catholic, he was prohibited from the sacraments for thirty years on account of his unbreakable addiction to opium. He perished with many others in 1900 as a result of the Boxer rebellion; given a chance to renounce his faith and live, he refused and was duly martyred. Having been excluded from the table of the Lord on earth, the Martyrology points out, he was thus found worthy of the eternal banquet.

Saint Mark Ji, pray for all those who are held in the bonds of addiction.
Posted by Pastor in Monte at 10:09 3 comments

Officially even commoner than a pleb

I took the BBC's 'how posh are you?' test and have discovered that I belong to a class of people which is so plebbish that I never knew it existed. Even chavs decline to leave their cards at my home! Apparently I belong to something known as the 'Precariat' because I have a low income and do not own my home (the only options according to the BBC are to own or rent, so I selected rent; in fact, I am a tenant); I also know, like, and frequently associate with a lot of people the BBC presumably considers very common plebs. 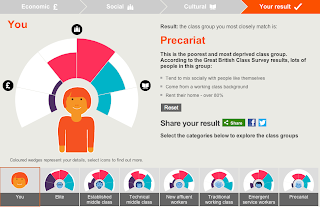 Who drew up this thing? I've no problem with being a member of this Precariat (apparently representing the absolute dregs of society), but somehow I feel that it doesn't quite identify a lot of other characteristics which might be important. Yes, I know and associate with cleaners, manual workers and others, but I also would count some posh people among my friends.

Sometimes I think that the perceived class-ridden nature of UK society is a nonsense. At other times I'm not so sure. I'm especially intrigued that the (supposedly egalitarian) BBC seem to think it needs highlighting.
Posted by Pastor in Monte at 15:44 12 comments