I have decided to delete the post about the Society of Pope Leo XIII. The Society looked, and looks, to me to be a very strange organisation which has little or nothing to do with the Catholic Church. However, the comments in the combox were getting worryingly specific, and my policy of only excluding egregiously offensive comments was allowing through allegations which I was personally unable to prove or disprove, and therefore defend. I apologize to those who made comments; my suggestion is that if you feel strongly enough about these things, that you establish a blog to express them.
Posted by Pastor in Monte at 09:26 1 comments 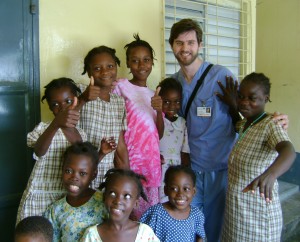 Do go over and take a look at a new blog, written by my friend, the newly qualified Doctor Tommy Heyne, a graduate of the excellent University of Dallas, and which went on line only last night. His site—for though technically a blog it seems rather more like a website—is already a positive cornucopia of interesting things, mostly concerned with the spiritual, the medical and the missionary.
It seems such a little time ago that I was beginning to despair that the Church would ever find her feet again—the grain had really fallen into the ground and appeared to die. But, as our Lord promised, green shoots are everywhere. In people like Dr Tommy, we can see the Church reaching out in a missionary sense, full of zeal for the Gospel, and also for the corporal works of mercy.
Dr Tommy's site is confusingly called Caritas, Veritas et Hilaritas—nothing to do with Fr John Boyle's excellent Caritas in Veritate except for the fact that both are written in the United States.

Beakers are poured in Husborne Crawley

Crossing today from the A1M to the M1 via the spanking new-looking A412, we shouted in unison, going round a roundabout, 'Husborne Crawley'! It was as though we had discovered Shangri-La. Yes, folks, we can confirm that there really is a place called Husborne Crawley (there is a place called Burton Dasset too, but not nearby). We bethought ourselves of trying to find the local Archdruid; there was no obvious Moot House, and the only pagan object of devotion we could find was the local White Horse of Husborne Crawley. The Archdruid was not there, alas, (at least we didn't think so), which perhaps was as well, since she might be none too pleased at being called upon unannounced. I wouldn't like to end up buried under the altar in a crouching position, perhaps clutching one of those eponymous beakers. 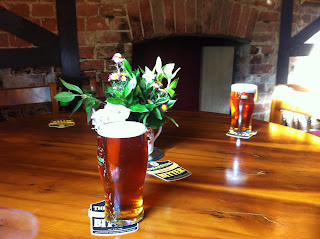 It being lunchtime, we bethought ourselves of the inner man. Moot house or no moot house, we shared poured out beakers in the White Horse and partook of the food of a bygone age. Not perhaps the age of the Beaker People, but I had chicken kiev and chips for the first time in decades, and my companion had sausage, egg and chips. Sort of time travel, really.
And we greeted the Archdruid from afar. And do so again now.
Posted by Pastor in Monte at 18:44 9 comments