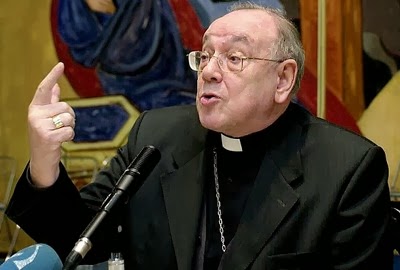 From last week's Tablet, about one of the new Cardinal-designates, Fernando Sebastián Aguilar, former Archbishop of Pamplona, lauded by the writer as a theologian:

Notably, he is a firm believer in the validity of the post-Vatican II liturgical reforms. He recently told his confrère and respected Rome-based liturgist Fr Matias Augé that he recites Eucharistic Prayer II by heart at all his Masses. When the priest pointed out that traditionalists believe EPII does "not adequately express the sacrificial dimension of the Eucharist", the cardinal-designate replied: "Don't worry, anyone who says this doesn't understand a thing about the sacrificial dimension of the Mass".

Words fail me. And if they cease to fail me, I think that probably I would never stop writing. Is this really the ultimate boast of a Vatican II theologian, that he uses nothing but EPII, even though most of the Latin world does likewise? And as for the rest…


p.s. I gather he's earned the hatred of the liberals for some rather unconsidered remarks about homosexuality. I found this when I looked for the picture I've posted above.
Posted by Pastor in Monte at 14:32 3 comments

The late Monsignor Alfred Gilbey is supposed to have described the Knights of Malta as 'a very elaborate way of doing very little good'. A most unfair (if amusing) comment, the waspishness of which would incline me to think that its attribution is not right: Mgr Gilbey was a charitable man. But there is a spirit abroad which seems to think that trimming away trimmings is a good thing in itself. There have always been puritans, and there will always be puritans; people with wagging fingers who want to cancel Christmas, and take others having fun as a personal affront.

It is summed up by many in that oxymoronic phrase of Vatican II: noble simplicity—which has, by the way, little to do with poverty or real simplicity. It was in the interest of noble simplicity that officials in the time of Pope John Paul II commissioned set after set of 'simple' (but very expensive) concelebration vestments for the Pope himself and  the assisting cardinals, often used only once, while the elaborate and decorated vestments of ages past lay gathering dust in the sacristies of St Peter's.

I do get it, the idea of simplifying. But we run the risk of making the Church more boring. The difficulty comes when people look at the frills rather than at the thing to which they point. And human nature will mean that some will and others won't. Most won't, though, and the existence of frills doesn't necessarily mean that their users are frivolous.

And now diocesan priests are not to be monsignori until 65. Well, I can't say that I'm particularly exercised about that. In fact I think that it's probably a good thing; in my diocese we have a couple of younger monsignori and canons, and excellent chaps they are. But they would still be excellent chaps without the purple and fake fur. What is so strange (as Fr Michael Brown points out so eloquently) is that the Roman Curial mandarins (supposedly being reformed) can still be monsignori at 35, if they can succeed in not blotting their copybooks for five years (and most of them can manage that).

Actually, I've got no problem with curial mandarins becoming monsignori, and one or two even cardinals. But I do wonder why many of them, sometimes with no pastoral experience at all, are made bishops, with pretend dioceses. Getting rid of that system would really be a reform worth having, I think. Why not let them have all the old ranks of the Monsignorate, with the top one going to the top guy in each congregation? Surely they should only be bishops if they have already been bishop of a real diocese. I don't think that this would make it a duller Church, simply a more focussed Church.

A bit of dressing up, a title here or there; these things make life interesting. And they connect us to the Church of the past and remind us that we have to preserve things for the Church of the future; the Church of 2014, after all, is not the only thing that matters.
Posted by Pastor in Monte at 07:47 3 comments