Sometimes, when things around look bad, I take comfort in the candles people light around the world.

There are those who think that classical music is dead, gone up a dead alley. Not at all: consider Naji Hakim—not a name, I know, to suggest what he is—probably (well, in my opinion) the finest organist alive today in a very much living French tradition. In Hakim, Maurice Duruflé lives and grows; in the wonderful improvisatory tradition of France, music, the chant still breathe and inspire. Just listen to this Passiontide improvisation on Vexilla Regis, and shout Hosanna!


My thanks to Fr Michael Gollop, here.
Posted by Pastor in Monte at 15:16 5 comments

Progressivism, Polemics and the Papacy

'It's the Pope's turn to retaliate in Catholic Civil War'.
When stripped of its rather polemical tone, this article by Gerard Warner in The Scotsman makes some telling points about the background to the present crisis and suggests a possible (if rather extreme) solution.
Somehow, though, I don't see Pope Benedict taking this advice, though unquestionably the time has come for some serious house-cleaning.
Posted by Pastor in Monte at 09:21 2 comments

The excellent Fr Dylan James has some good examination of conscience pages on his blog. I don't know whether it was the wry sense of humour of the blog site managers, or pure accident, but when I looked at the page, I saw, next to the entry for 'lust'…… well, look for yourselves! 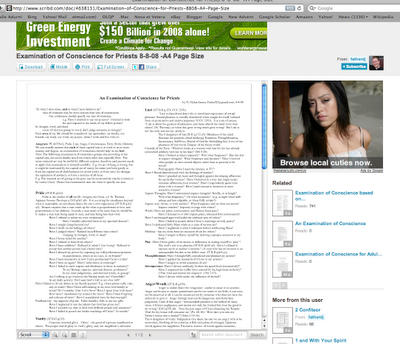 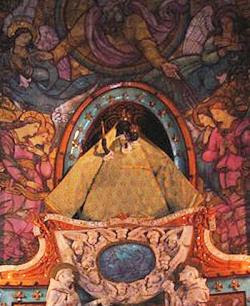 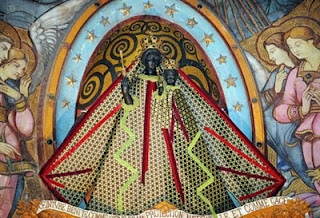 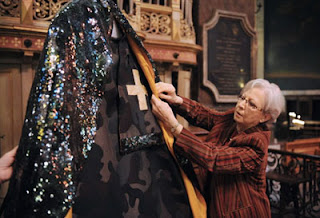 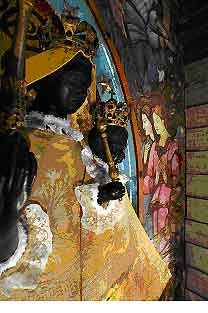 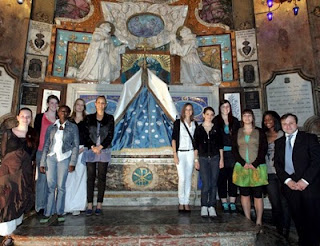 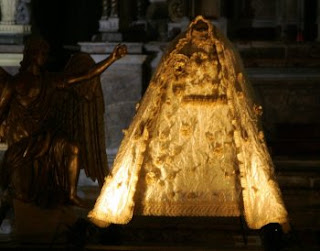 The Black Virgin in the basilica of Notre-Dame de la Daurade in Toulouse has had a makeover. Her costumes having got tatty over the years, several top couturiers have been commissioned to produce seven new outfits for her; contributors include Christian Lacroix, Jean-Charles de Castelbajac and Franck Sorbier.
Posted by Pastor in Monte at 21:01 5 comments

We are not required to provide abortion info: official!

There was a question raised in the House of Lords on 11th March by that veteran campaigner, Lord Alton. Here is the Hansard record:

Asked by Lord Alton of Liverpool

To ask Her Majesty's Government whether the Children, Schools and Families Bill will place a requirement on Catholic, Jewish, Anglican and Muslim voluntary aided schools to provide children with details of abortion clinics and abortion referral agencies. [HL2447]

The Parliamentary Under-Secretary of State, Department for Children, Schools and Families (Baroness Morgan of Drefelin): It will not. Schools will have to teach their pupils where and how to obtain health information. They will also be encouraged to teach their pupils how to access information about contraception and sexual health as part of their delivery of SRE, but whether and how they do that will be at their discretion.

'Whether and how they do that will be at their discretion'
So, after all, we are not required to provide information about abortion or contraception. A******a! (it still being Lent). Now, (another question), why haven't the Catholic Education Service noticed this yet (the question and reply having been put last week)? Or, if they have noticed it, why haven't they drawn our attention to it?
Many thanks to a friend for this information, who, I believe, would prefer to remain anonymous.
Posted by Pastor in Monte at 18:30 13 comments

Having been here there and everywhere recently, I have rather missed the furore around Fr Ray's observations on his blog St Mary Magdalen (see left).
Frankly, I'm proud to be his friend, and want to say so here.
Nuff said.
Posted by Pastor in Monte at 15:42 5 comments

I am not greatly in favour of petitions: they don't usually achieve their purpose, and often have the opposite effect. Ed Balls' appearance on the Today programme, much discussed on other blogs, has rather sharpened the issue, though.
Let us look at the sequence of events again: the Website of the Catholic Education Service put a headline suggesting that they, by their lobbying, had managed to make the bill Catholic-teaching compliant. I'm paraphrasing, of course, and I see that the headline is no longer there.
This was not tactful: imagine how it was read in certain Labour quarters. They would have considered that the Catholic Church had yet again sidestepped its obligation to respect 'fundamental human rights' such as the right of a mother to kill her unborn child. Ed Balls had been placed in a tight corner.
So, to put himself back in charge, the minister feels that he has to assert that Catholics will in fact be absolutely obliged to provide all sorts of things that are profoundly rebarbative to us.

'They must explain how to access an abortion. The same is true on contraception as well.'

No exceptions will be made. We may give our opinion on it if we like (how gracious!), but not to refuse to involve ourselves in killing the unborn, even if only in a remote way.
The press, of course, picked up the story, and tried to contact the CES for a comment. The CES seemed simply to have taken the phone off the hook, the day off, and were in a word uncontactable. Imagine that; probably the biggest crisis in Catholic schooling for a century, and (no doubt not knowing what to say) they have nobody to make a comment!
And now here we are with a big unanswered question:
Is Ed Balls right? Will we be obliged in law to do this?
We need an answer!
Meanwhile, silence. Now, silence does not, of course, imply inactivity, merely that things may be going on under the surface. Let us hope and pray so. I expect that there are plenty of influential people very concerned about this. Meanwhile, Canon 212 §2 says:
The Christian faithful are free to make known to the pastors of the Church their needs, especially spiritual ones, and their desires.
So, though others may think it disrespectful to the bishops, I humbly suggest you request their Lordships to do their duty, and sign the petition here.
Posted by Pastor in Monte at 09:24 6 comments