Not knowing what to think

At the weekend, term ended here at the Seminary with the Diaconate Ordination; a very splendid occasion when Paul Andrew, a former Anglican clergyman, was ordained (transitional) deacon for the diocese of Plymouth. Deacon Paul has his own website and journal here. The other members of his class were ordained deacon in the autumn.

Still for such splendid occasions, an organist is required, and I was approached. I was surprised, because I am far down the pecking order of organists here (quite rightly, as all the others are much better than I am), but pleased to be asked. I played for many such ceremonies in the past, before rust began to gather in my joints (and I've passed the half-century mark since I wrote the last post). And though I'm a moderately competent service accompanist, these days I get very nervous playing proper pieces for voluntaries &c, and so generally make a hash of them.

So why did they ask me, then?

The usual organist, an external professional who lives on the south coast, had married a wife and could not come. Or some other reason.
The number one internal organist suddenly had to make a retreat in Canada, and couldn't wait for the last day of term.
The number two internal organist was directing the schola cantorum and preferred not to have to be rushing from one place to another, as he said to me.
The number three was needed to sing in the schola.

So, it was explained to me, that left me, and would I kindly do it?

I was flattered but, yes, you're right, I should have been suspicious.
It turns out that Carlo Curley was on the guest list; a major professional organ recitalist, who describes himself as 'The Pavarotti of the Organ'!
No wonder all the other organists headed for the hills! They all knew about it, but did they tell me? No they didn't, because they knew that if I knew, I too would have found an unbreakable subsequent engagement in Wagga Wagga or the Falkland Islands.
Mr Curley must forgive me if I say that God rushed to the defence of his priesthood and struck the Pavarotti of the organ in the foot, making his attendance at the ordination impracticable. He didn't come. Thank God.
And now I don't know whether to be furious with my colleagues for not telling me, or relieved.
On a happier note, I noticed that the Holy Father initiated the new Vatican news service with a click on an iPad. Good to know that Apple Mac Technology has reached the highest quarters. Catholicism and Apple Mac: an unbeatable combination!
Posted by Pastor in Monte at 10:07 5 comments

In Hope of Harvest 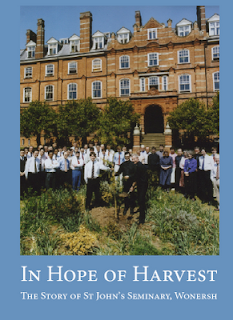 Well, the book is launched today. For anyone who might perhaps like to know something about the history of St John's Seminary, Wonersh, (why?) they can get a copy here:

It has 502 pages, and covers the story of St John's from its foundation in 1889 more or less to the present day.

People are kind enough to tell me that it isn't boring.
Posted by Pastor in Monte at 12:08 6 comments

The closure (let us hope, suspension) of Fr Hunwicke’s Liturgical Notes is, I think, a grief for all of us of a Catholic persuasion. That very phrase should suggest the distance we have come. I think that there is nobody who has sold to us ‘Romans’ so persuasively the merits that may be found within Anglo-Catholicism. You need only see the number of Catholic blogs who link to his. I think that among all those Anglophones who welcome Pope Benedict’s various initiatives, on both sides of the Tiber, Fr Hunwicke has starred as one of the most erudite and articulate expositors.
I cannot imagine that Fr Hunwicke has suspended his work willingly. In fact, I rather suspect that in his Liturgical Notes he has found his most adaptable and functional pulpit to date. But it seems clear from what he writes that he abandons the blog in order to be able to exercise the priesthood of Jesus Christ. I find this wholly admirable. What I mean is that were John Hunwicke to be denied the priesthood, this would assuredly release him to write whatever he wanted without fear of censure. I would continue to read him, as, I strongly believe, would large numbers of people, including those in Rome.
John Hunwicke is now a Catholic; a believing, communicant member of our faith, and that will not change. Though I have never met him, I will continue to look up to him as one of the main architects of one of the most exciting changes to have taken place in Western Christianity since the Reformation. I pray that this development will not deter many others from following him across the Tiber, though I fear it may.
Correction— I know, from actual examples, that it already has.
Posted by Pastor in Monte at 16:19 33 comments 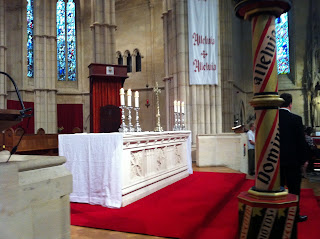 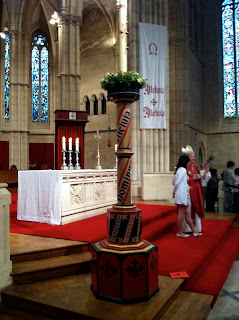 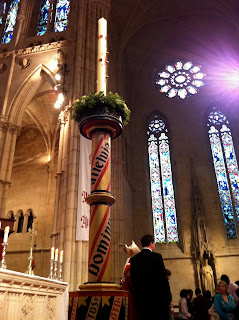 I visited Arundel Cathedral last Sunday for the Confirmation of some of the young people from the Valle Adurni, and was very pleased to see the high altar looking splendid, with the 'Benedictine Arrangement' of candlesticks and substantial cross (no seventh candle, alas). There also has appeared a rather wonderful enormous new paschal candlestick.
Posted by Pastor in Monte at 08:13 8 comments

Commenting on the cancelled visit of Cardinal Burke to the Pro Ecclesia et Pontifice conference, the sage William Oddie has a lot of useful things to say, as usual.


He does, however, write this:


I cannot help reflecting on how much less divisive it would have been had Cardinal Burke emulated Cardinal Hume, who when Mother Angelica addressed Pro Ecclesia himself not only attended but addressed the conference, and was not only respectfully but appreciatively applauded.

Well, up to a point, Lord Copper. I was there that day; so of course was William Oddie; in fact he was in the chair. Mother Angelica was on superb form and Cardinal Hume, when he came on the platform to address the conference, was indeed warmly applauded. Everyone felt that it was good to see him there, and perhaps suggested a willingness to listen.
Until he began to speak, that is: the burden of what he said was 'you are Catholics; Catholics are supposed to obey their bishops; we know what is best for you; put up, and shut up.' The applause at the end (there was a little, out of politeness) was anything but appreciative and respectful; in fact there was a lot of angry muttering.
The idea that traditionally-minded Catholics could cynically be hoist with their own petard by liberal bishops demanding an obedience they would never even dare to ask of others, and refuse to the Holy Father ('this rule does not apply in this country') disgusted me then and disgusts me now.
It does not appear to me that our current hierarchy are of this mind, thank God. In fact, it is a pleasure to note a new spring in their step, and to see that some of them actually seem to enjoy being Catholic these days.
Sorry about the weird text; it isn't supposed to mean anything: it just went strange of its own accord, it seems, and I couldn't get it back to normal.
Posted by Pastor in Monte at 07:58 8 comments