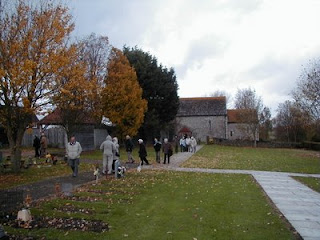 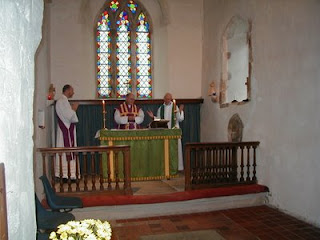 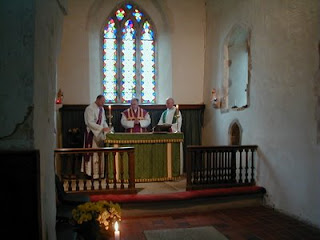 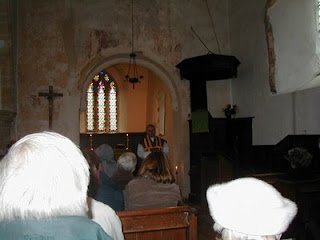 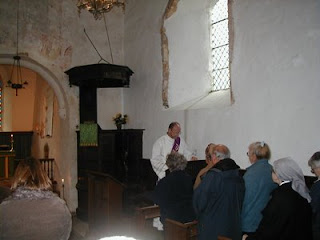 We have two cemeteries in this parish; one of them is attached to the little church of St Botolph in the village (more a hamlet, really) called Botolphs right on the bank of the River Adur. On the Saturday after All Souls day this year we sought permission from the churchwardens there (there being no incumbent right now) to celebrate Mass before our November blessing of the graves. They were very welcoming indeed, and we are very grateful. I think that this was almost certainly the first (R.) Catholic Mass since the vigil of Pentecost 1559 (or whatever date you want to ascribe to it). It would have been a fine occasion to have celebrated something Sarum, or even Latin, or ad orientem, but that would have been too awkward to organize, and besides, it was really for the benefit of those whose loved ones were buried in the adjacent cemetery, and it was necessary to take their wishes into consideration.
St Botolph's dates from around 950, so is very old indeed, though it has been altered over the ages, having had a gothic aisle built on, only to have it fall down again. If my memory serves me right, St Botolph is not the original dedication, which was St Peter de vetera ponte (i.e. over the River Adur)—there is no bridge right there now. I dare say somebody simply associated St Botolph with the name of the village. It has some traces of wall paintings, as you can see in the pictures, but they are only fragmentary, and not nearly so splendid as those in the next village of Coombes, half a mile down the river. Its only other claim to fame, I think, is that Archbishop Laud once preached there.
Sorry—the pics seem to have arranged themselves in a strange order: I'm sure you can make sense of them, however.
Posted by Pastor in Monte at 16:46

Whilst I can appreciate the difficulties a celebration of Sarum use would have entailed I don't quite see why you could not celebrate ad orientem.

I would have thought being a small, quite intimate, liturgical space ad orientem would have worked perfectly and added to the appreciation of the celebration.

It would have required moving sanctuary furniture about, which I felt would have been discourteous to our hosts. Had we found it like that, I would have celebrated ad orientem and used the same argument to those who didn't like it.

How splendid to say Mass in such a beautiful and ancient church. Wonderful

How many churches do you have in your parish and do you have an assistant to help you service them?

[What's with the "Radio silence?"

beautiful church..but sadly the number of people attend the church are shrinking day by day, especially young people. In my country, the young people take over the church, from human development mnistry, youth ministry and music ministry

i guess, you guys really need to look at this matter seriously. dun let the young people stray away from their faith

Anonymous: sorry it was so long before posting your comment: it got lost in the system.
This parish has three churches, and at the weekends a deacon assists me, and a retired priest says a Mass.