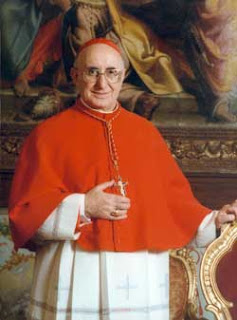 I had always thought Cardinal Giacomo Biffi, the Milanese former Archbishop of Bologna, to be rather a good thing. I enjoyed his book Casta Meretrix on how the Church can be (as it were, and forgive the allusion) simul iustus et peccator. He has an almost Australian knack for saying it like it is and being no respecter of persons. In his autobiography, Memorie e Digressioni di un Italiano Cardinale, he quotes with approval the words of St Ambrose:

A bishop can do nothing more perilous before God, and nothing more shameful before men, than fail to proclaim freely his own thoughts.

And that is just what he has done, without pulling the punches, pretty well throughout his life. This is Biffi on Ecumenism:
But woe to us if we let this inspire us in our evangelical testimony before the world, in our ecumenical efforts, in discussions with non-believers. In virtue of this principle, Christ could become the first and most illustrious victim of dialogue with the non-Christian religions. The Lord Jesus said of himself, in one of his remarks that we are inclined to censure: "I have come to bring division" (Luke 12:51).

In the questions that count, the rule can be none other than this: we must look above all at what is decisive, essential, true, whether it divides us or not.
And this, just before the election of Benedict XVI, is what he wrote to the new Pope, whoever he might turn out to be:
"1. After hearing all of the statements - correct, opportune, impassioned - that have been made here, I would like to express to the future pope (who is listening to me now) my complete solidarity, concord, understanding, and even a bit of my fraternal compassion. But I would also like to suggest to him that he not be too worried about what he has heard here, and that he not be too frightened. The Lord Jesus will not ask him to resolve all the world's problems. He will ask him to love him with extraordinary love: 'Do you love me more than these?' (cf. John 21:15). A number of years ago, I came across a phrase in the 'Mafalda' comic strip from Argentina that has often come back into my mind in these days: 'I've got it,' said that feisty and perceptive little girl, 'the world is full of problemologists, but short on solutionologists'.

"2. I would like to tell the future pope to pay attention to all problems. But first and most of all, he should take into account the state of confusion, disorientation, and aimlessness that afflicts the people of God in these years, and above all the 'little ones'.

"3. A few days ago, I saw on television an elderly, devout religious sister who responded to the interviewer this way: 'This pope, who has died, was great above all because he taught us that all religions are equal'. I don't know whether John Paul II would have been very pleased by this sort of elegy.

"4. Finally, I would like to point out to the new pope the incredible phenomenon of 'Dominus Iesus': a document explicitly endorsed and publicly approved by John Paul II; a document for which I am pleased to express my vibrant gratitude to Cardinal Ratzinger. That Jesus is the only necessary Savior of all is a truth that for over twenty centuries - beginning with Peter's discourse after Pentecost - it was never felt necessity to restate. This truth is, so to speak, the minimum threshold of the faith; it is the primordial certitude, it is among believers the simple and most essential fact. In two thousand years this has never been brought into doubt, not even during the crisis of Arianism, and not even during the upheaval of the Protestant Reformation. The fact of needing to issue a reminder of this in our time tells us the extent of the gravity of the current situation. And yet this document, which recalls the most basic, most simple, most essential certitude, has been called into question. It has been contested at all levels: at all levels of pastoral action, of theological instruction, of the hierarchy.

"5. A good Catholic told me about asking his pastor to let him make a presentation of 'Dominus Iesus' to the parish community. The pastor (an otherwise excellent and well-intentioned priest) replied to him: 'Let it go. That's a document that divides.' What a discovery! Jesus himself said: 'I have come to bring division' (Luke 12:51). But too many of Jesus' words are today censured among Christians; or at least among the most vocal of them."
Good stuff, for the most part. But he has not appreciated the two most recent archbishops of his home diocese, Milan, Cardinals Martini and Tettamanzi. The latter's latest offence is to have revised the Ambrosian Lectionary and, in Biffi's view, to have done it badly. In fact, Biffi appears to be nearly apoplectic with anger.
I think that most people who read this blog would think that the revision, in most matters, stood pretty well in the general movement of the Hermeneutic of Continuity, since it restores some features of the rite that had been lost over time. Although simply presented as a revision of the Lectionary, in fact it has many ramifications for the Ambrosian Rite generally, since it tackles also the Calendar.
The Ambrosian Rite suffered particularly acutely in the twentieth century. Its archbishop in the fifties, Giovanni Battista Montini (later Paul VI) made several efforts to romanize the rite. This was achieved above all after the Council; the modern Ambrosian Missal is really a Montini Missal with a few picturesque additions (a few Kyrie Eleisons here, a few blessings of readers there) and a different colour sequence for vestments.
The latest revision restores several ancient customs, all of which Biffi deplores:
• Advent is renamed the 'Lent of St Martin', and runs from November 11 (though traditionally it had run from 12th).
• Sundays after Pentecost are renamed, er, Sundays after Pentecost, instead of Sundays per Annum.
• Ancient titles of various Sundays have been restored
• A second Gospel of the Resurrection has been introduced for Vigil Masses of Sundays. I don't know the history of this; maybe it, too, is ancient.
• Ascension and Corpus Christi are to be celebrated (Shock!Horror!) on their proper Thursdays, the parish priest having the option to celebrate an external celebration of the feast on the following Sunday.
• Lectio continua has been introduced for certain seasons.
• Gospel readings are to begin 'In illo tempore.'; 'At that time.'
You can read the whole thing here, on Chiesa.
Your Eminence: I really do appreciate much that you have written and said. But in this case, please get over yourself!
Posted by Pastor in Monte at 09:09

But seven Sundays in Advent, creating one out of thin air?

Surely Biffi is right to biff about that.

How unfortunate indeed. Like you, Father, I'd always had a soft spot for Card. Biffi, but this piece is really rather embarassing for him. One charitably tends to believe that it was written by soemone else under his name...

Rubricarius: yes, of course. It would have been better not to have done this, perhaps.
You can see how it happened, though, wanting to start the thing on St Martin's day. And of course the extra Sunday will happen very infrequently in the normal course of things.

Well, I have very little knowledge about Ambrosian liturgy, but someone from Milan suggested on Cattolici Romani that:

Can you kindly explain. In my Ambrosian books there are only six Sundays. Where is the seventh?

I'm not an expert either, but apparently the new lectionary was heavy-handedly imposed also on the traditional Ambrosian rite, causing some kind of rebellion:

The fact that Card. Biffi is unhappy may be good news for the Milanese traditionalists.

Are we to allow ourselves to wonder whether modifying the Ambrosian Lectionary and Calendar by infusing it with previously discarded elements is an experiment by the CDW to determine the possibility of conducting a similar exercise with the Roman Rite as well?

“But he has not appreciated the two most recent archbishops of his home diocese, Milan, Cardinals Martini and Tettamanzi.”

Well I’m with him on that, at least. Regarding Martini, that goes without saying as he’s been off the rails for some time. In the run-up to the last Conclave there were those who considered Tettamanzi as papabile. I never shared that view and asserted at the time: “Whoever is elected, it will definitely NOT be Tettamanzi.”

He appeared to me to be angling for the job - trying to emulate his predecessor Papa Giovanni. And, given the shenanigans he has permitted at the Duomo over time, it’s a good thing he wasn’t elected!

I'm not at all familiar with the Ambrosian Rite, but some of Cdl. Biffi's concerns appear to me to be nit-picking.

S. Magister has an updte on this story:

"ROME, February 15, 2010 – The harsh criticisms aimed by Cardinal Giacomo Biffi against the new lectionary for the Mass in the Ambrosian rite – made public by www.chiesa – have raised great turmoil not only in the archdiocese of Milan and in the territories where this rite is used, but also in Rome, where Biffi's claims are being examined by the Vatican congregation for divine worship.

Cardinal Biffi – archbishop emeritus of Bologna, but a Milanese and a prominent scholar of Saint Ambrose and of the rite named after him – has received messages of support from many members of the Ambrosian clergy.

But the opposite reactions are also strong. And the defenders of the new lectionary are making many criticisms of Biffi's position. In its methods and content.

The first mistake they charge Biffi with is that he didn't appeal to the proper authority, Cardinal Dionigi Tettamanzi, who as archbishop of Milan is the "head" of the Ambrosian rite." etc..

There is a very good, and balanced, post by Gregory Di Pippo on NLM about this.

The seventh Sunday had been created by treating the Vigil of the Nativity as only an evening part of the day, creating an extra liturgical day (as in the 1970 Roman Missal and its subsequent editions), when that Office fall on a Sunday.