I have been away for a few days; for years I have been promising the seminarians to whom I teach Church History that I would go with them to Rome and put a lot of what I have been saying in context. This year, Dominic Findlay-Wilson called my bluff and said that he would do the travel-agent stuff if I came up with the talking stuff. And, bravely braving volcanic ash and strikes (we flew BA) our little group finally made it and back!. I thought I might share with you a few pics of the event which, thank the Lord, went very well indeed.
This is the view from my bed: if I had a better camera, I could have shown you my feet. Roman cognoscenti among you should be able to tell where I stayed. 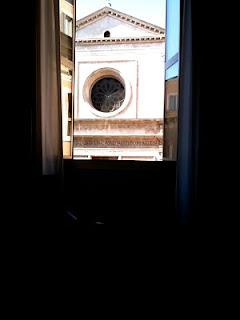 Here's a photo which will only mean something to people who studied at St John's Seminary, Wonersh. Mgr Ernest Moodie (commemorated on this plaque located in the Blessed Sacrament chapel of the Lateran Basilica) was a seminarian at Wonersh in the early twentieth century and after his ordination, so it is said, was left huge pots of money with which he bought a flat in New York, another in London, a third in Rome, and a canonry at St John Lateran. Let it not be thought, though, that he was a man without a conscience; he was a generous benefactor of all sorts of causes, among them the fabric of St John Lateran (hence the plaque) and St John's Seminary (where there are two plaques). 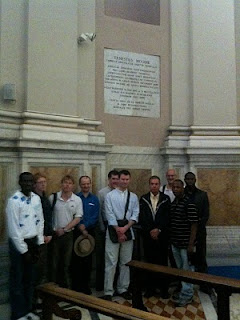 This next simply piqued my curiosity. I stumbled across it (nearly literally, since it is set into the floor) in the Dominican church of Santa Maria sopra Minerva. Anybody know anything (to save me the labour of going to Wikipedia)? 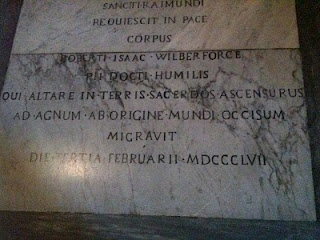 We went to the English College for Mass one evening, and were entertained to dinner and a fascinating tour of the College by its rector, Mgr Nicholas Hudson. Several students thought this the highlight of the trip. 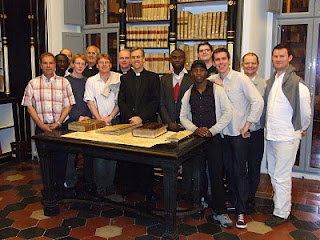 And here we are about to go underground; the excavations under St Peter's are extraordinarily fascinating. 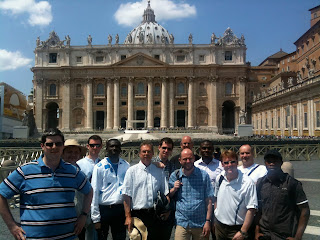 We worked hard, I have to say…… 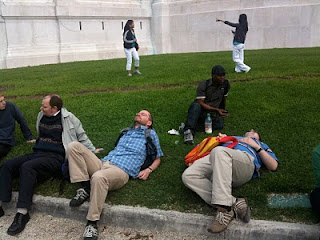 But a caffé granita at the Tazza d'Oro was quite reviving…… 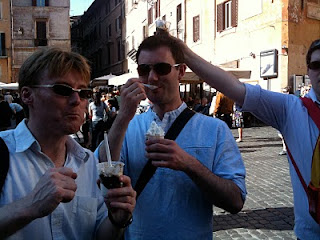 and this photograph, taken with my iPhone on Friday morning, on my way to say Mass very early in St Peter's, is something I am quite naughtily proud of. I know, it was just luck, and if I had had a better camera…… 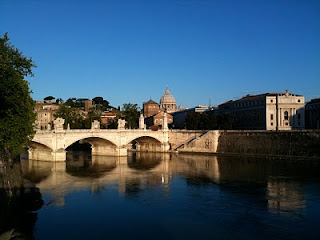 That Robert Isaac Wilberforce was one of the famous Wilberforce family - a son of William Wilberforce. Under Newman's influence he converted to Catholicism in 1854, moved to Rome to become a Dominican and died a few weeks before ordination. When Newman re-issued his Church of the Fathers in 1857, he dedicated it to Wilberforce with the words:

TO A FRIEND,
WHO IS AS DEAR TO ME NOW,
AS WHEN HIS NAME STOOD HERE,
AND THREW LIGHT OVER THESE PAGES;
WHOSE HEART IS IN GOD’S HAND,
TO BRING INTO THAT SACRED HERITAGE,
WHICH IS BOTH THE CHURCH OF THE FATHERS,
AND THE HOME OF THE CHILDREN.