Traffic in the Veneto

The Veneto is horrendously overcrowded. There are 4.8 million people crammed into this little corner, plus about 60 million tourists each year (both statistics from Wikipedia). Even the resident population is greater than the entire Republic of Ireland's (at 4.4 million). You can feel it, too, as you drive the overcrowded single-carriage roads past houses every few yards even in the countryside.
Driving, then is not a positive experience. On the whole, I find Italian drivers do not deserve their reputation. They drive at speed and with little regard for officialdom, but (at least in the north) I found them courteous and good humoured, and very, very alert and skilful. I never felt intimidated or at risk. There are some oddities, however, such as this symbol for a speed camera: 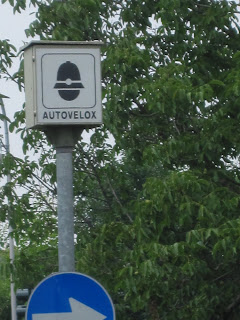 —an old fashioned bobby's helmet, in fact. Funny that that should be such a potent symbol of policing in Italy.
And then there is another curiosity. I should introduce this with a passage from Bill Bryson's Neither Here nor There:

But the most preposterous law of all, a law so pointless as to scamper among the outer margins of the surreal, is the Swedish one that requires motorists to drive with their headlights on during the daytime, even on the sunniest summer afternoon. I would love to meet the guy who thought up that one. He must be head of the Department of Dreariness. It wouldn't surprise me at all if on my next visit to Sweden all the pedestrians are wearing miners' lamps.

I'm afraid, Bill, that there is a law that is even more surreal. The same thing is now law in Italy. The land of sunshine! There we were, pounding up the miles at a steady two miles a fortnight (about as fast as you can go in much of the Veneto, on account of the traffic) in the blazing midday sun with our headlights on!
Posted by Pastor in Monte at 08:53

Thanks for your amusing and observant posts. I would speak up for lit headlights in daytime, though. It is, in many places here in the US, SOP (although the law, in very few jurisdictions)-- having them on does increase the visibility of the vehicle in certain circumstances (I drive often on roads where one frequently is passing from sun to shadow, due to the surrounding forest, and headlights on on oncoming cars is a third or a half second's advance visual notice).

I detest the so called 'nanny state', by the way, so my appreciation of lit headlights should not be construed as a defence of the Swedes' and Italians' utter insanity....

Thanks, Marc: though what does SOP mean, please?