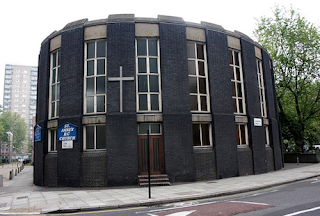 I hope that this is just an ugly rumour put around by opponents of the Ordinariate to dissuade people from its arms, or else an early April Fool joke. This thing, according to Damian Thompson, is being considered by the Bishops' Conference as the 'pro-cathedral' of the Ordinary, or at any rate its London base. Better to share a church, I should have said.

Surely there must be better buildings around. Does the pro have to be in London? There are plenty of fine churches in Liverpool in need of a careful owner. And, if it isn't too late and there are some funds to care for it, there is the splendid church at London Colney, which the Diocese of Westminster no longer needs.
Posted by Pastor in Monte at 08:23

London Colney would be an astoundingly appropriate choice in a vast array of ways. Colney for Pro!

Are there any pictures of the church at London Colney online?

You mentioned Liverpool. What a pity St Mary's Fox Street, the Vatican of the North, has been turned into a band rehearsal room. The altar and pulpit used by St Charles Borromeo and St Robert Bellamine and another illustrious Saint. The beautiful Marble altar rails - all gone into storage. And how magnificent to be situated right in the archdiocese of +Warlock dec'd and the stamping ground of +Vinny Nichols, who was in the same class as me at school.

London Colney looks spectacular. It would make a terrific venue for Ordinariate ordinations and large-scale festivities (space for 300).

The one in London may be hideous but I'm sure there are lots of ex-Anglicans with the skill and energy to beautify it within.