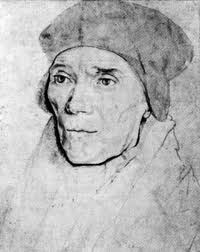 I am very happy to learn that a new biography of St John Fisher has been written, and will be published by Alive Publishing in the next few weeks. It has been written by none other than our own Archbishop of Westminster, Vincent Nichols. I will provide more details when I know them.

Along with my namesake, Fr Tim Finigan, I have long had a devotion to St John Fisher. His role as a martyr is well known, but I have always felt strongly that, had the course of history in these islands gone another way, and St John lived the full course of his natural life, that he would have been canonizable (is that a word?) as a Confessor.

Born a Yorkshireman (at Beverley) in 1469, he grew up in what I think we would call a middle-class family and showed early academic promise which led to his gaining a place at Cambridge University in 1484, where he early attached himself to the new approach to studies and theology now known as the Christian Humanist Movement. He followed what I think we can only call a brilliant academic career, and came to the notice of the extraordinary Margaret Beaufort, mother of King Henry VII. She has been variously judged by historians, supposedly being responsible with the widow of Edward IV, Elizabeth Woodville, for bringing the Wars of the Roses to an end by uniting the Lancastrians (in the person of Henry Tudor) to the Yorkists by the marriage of Henry to Elizabeth of York, and also for managing thereby to get her son onto the throne to which he had only the very slimmest of claims. Be that as it may, John Fisher had the highest regard for her and thought of her as little short of a saint.

Elected Vice-Chancellor of Cambridge University, he managed to persuade his wealthy friend Margaret Beaufort to endow two new colleges, St John's (he himself consecrated the chapel) and Christ's College, to study the new approach to theology and the scriptures; he attracted to Cambridge scholars of Greek and Hebrew, so that the Bible might be studied in its original languages.

It was inevitable that he be drawn into Royal circles, and the royal favour got him the diocese of Rochester, the poorest in the land. In later years he was nominated to Winchester, the richest, but refused it. He was elected Chancellor of Cambridge University, and pursued its interests at court assiduously. On the deaths of Margaret Beaufort and her son Henry VII, Fisher was chosen as the preacher.

The growth of the Lutheran Reformation disturbed him, and, at the instance of King Henry VIII, he preached a famous sermon at St Paul's, when Luther's writings were symbolically burned. He wrote assiduously against the Protestants, and has been suspected as the real author of the Assertio Septem Sacramentum, for which Henry VIII took the credit (and the title Defensor Fidei). He also wrote many spiritual works, such as his commentary on the Psalms.

He became something of a tutor and friend to the new King Henry VIII and his Queen, Catherine of Aragon, sharing with the Queen a real interest in fostering the new Christian Humanism, she promoting the scholar Juan Luis Vives, who served also as her chaplain.

Fisher could have become like so many other talented clerics of his day, a dedicated climber of the social ladder. But in his own life he maintained a strict austerity which kept him focussed on the one thing that matters. It was said that he cut a window in the wall of his study so that he could see the Blessed Sacrament at all times when writing. If there were people in Rochester whom the clergy would not visit because of the stench of their poverty, Fisher himself would go. When his rooms were searched for his valuables after his arrest, the King's commissioners, finding at last a single locked chest in his bedchamber, broke it open to reveal only a hair shirt.

The matter of the Kings's setting aside of Queen Catherine and his attempted marriage of Anne Boleyn is very well known, as is Fisher's part in it.

I remain deeply moved by his final hours; called early in the morning to be told he must die, he thanked his messenger, then rolled over and contentedly went back to sleep. Later, he dressed in his best clothes ('for this is my wedding day'), read the Bible one last time ('this is eternal life, to know you, the only true God, and Jesus Christ whom you have sent', John 17:3) and commented 'here indeed is learning to last me until my life's end'.

St John Fisher is surely the most wonderful patron for the secular priesthood in England and Wales: we already have St Thomas of Canterbury: St John deserves to be better known, in my view. And thank you, Archbishop Vincent, for bringing him to our attention once more. I look forward to reading the book.
Posted by Pastor in Monte at 14:00

So do all of us here at the new St. John Fisher Academy in Racine, Wisconsin, USA!

Have you, by any chance, come across his sermons on the Seven Penitential Psalms?