Irish and the Liturgy

A few days ago, I stumbled across the blog Lux Occulta, and rather liked it, so included it in my links section, where you can find it. I was a little intrigued by one post, called The Myth of Catholic Exceptionalism in which the author, Shane, takes issue with those on the Catholic Blogosphere who have characterized the Irish Catholic Church of the 1950s as an 'insular, peasant-led, anti-intellectual, aliturgical backwater.' I had an uneasy feeling that I might have been one of those he was rebuking. He left a comment on the last post which reinforced my suspicion.

But either he has misunderstood me in my earlier posts, or I did not express myself very well.
From the earliest days Ireland has regarded herself as indisputably part of the Western Latin Church. Those who would put blue water between her and the Holy See have had to struggle hard; there has been a myth among Anglicans that saw the Celtic Church (their sort-of predecessor, some believed) as a bravely independent body tricked into Roman submission at the Synod of Whitby (664). A look at the life of, say, St Columbanus (d.615) would give the lie to that immediately. In it we see both a devotion to the See of Peter and yet also a very different way of looking at things (not least regarding the relative importance of bishops and abbots).
Throughout the English occupation of Ireland, and especially after the Reformation, there can be no doubt of Ireland's attachment to the universal Catholic Church; indeed bishops continued to be appointed, and took up their sees whenever possible—there was often even a nuncio (or 'internuncio'). The Church was unquestionably under pressure, but never severed its link to the mainstream Church.
There are those who argue that there was a Gallican streak in Irish Catholicism, and there is a certain amount of evidence for this; many priests were trained in France, and I have heard that this accounts for the use of red sanctuary lamps throughout the British Isles (red being the French local colour for the Blessed Sacrament). But when we come to the twentieth century there can be no doubt whatever of the attachment of Ireland to the Holy See: the Eucharistic Congress in Dublin, 1932, brought a great outpouring of loyalty to the Pope.
Others may have thought Ireland a backwater; she never thought of herself that way.
Nor did Ireland lack intellectual muscle. It has always, proverbially, been a reading nation, and the establishment and quality of the National University has led to Ireland, a tiny country, being ranked eighth in the world for its high proportion of quality universities. Seven of these were in 2008 ranked by the Times Higher Education Supplement as among the 500 top universities in the world.

Shane exhorts me to write with care about the Liturgical Movement in the 1950s in Ireland because, he writes, it is a subject he knows something about and (he gently implies) I plainly don't. I confess I know very little at all about the progress of the Liturgical Movement in Ireland, and would be very interested to read anything that Shane might write (and I do hope he will). I have never seen much serious evidence for the Movement, though, on the ground. That it was present is highly probable, especially in seminaries and cathedrals; that it never crossed my path is undeniable.

I think, for instance, of the rebuilding of St Columcille's Church in Kells. Co Meath, which took place under the inspiration of the great parish priest Fr McCullen, in the very early 1960s, I think. An spatially-inadequate and ornate 19th century church was demolished (with difficulty, as it turned out—the excuse had been that the old one was about to fall down) and a new one built. Now, to my eyes, it shows a lot of Liturgical Movement influence. Pictures on the web, alas, are few and far between. 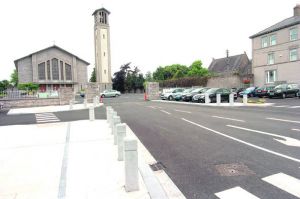 It is a very large building, without pillars or columns, so that everyone could have a view of the high altar under a simple tester, raised up on many steps. There were only two side altars, in the traditional Irish position, to the left and right of the high altar—none at all down the nave. Votive candles were strictly forbidden. The interior is very pleasing and harmonious, at least as designed, though it has had some unsympathetic reordering in recent years.
(The Blessed Sacrament is not now reserved , as one might suppose, on the old high altar, but behind Bishop Smith, and the old tester has been removed. The screen has been added, rather jarring with the style of the building) A new altar, as you can see, has been added in the nave. 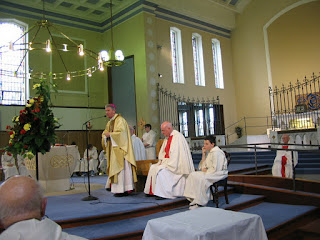 The building is a good one, but I have never experienced a Mass there which was not hurried—oh, correction; a visiting priest last week celebrated beautifully. I was once (several years ago) rebuked by a resident priest for taking a whole half hour to celebrate a Sunday Mass (including sermon and many many communions).

My point has always been that good or bad liturgy has never been vital to the spirit of the Irish Church; it has relied on other things, and so has survived both a lack of liturgy in the penal days and bad liturgy today. Call the other things 'peasant' if you want; I would not, for everyone practised them. What I want to do in another post is to look at some of those things and find a Catholic rationale for them.

Of course you could always find good liturgy; the point is that is was not commonplace. And is probably less so today.
Posted by Pastor in Monte at 18:36

Thank you for the link (which I have reciprocated) and the kind compliments!

BTW I was not referring to you or anyone in particular in that comment, more to a general perception on the blogosphere.

And thank you, too!

"Votive candles were strictly forbidden."
What on earth is the point of that?

Yes, peculiar. Mc Cullen had a thing about them. I notice that they have been introduced now, however.

Sorry for going a bit off topic, but every few weeks or so I send out a scrapbook concerning the conciliar changes in the Irish Church (particularly matters liturgical) by email to those on my mailing list who have signed up to it. If you Father or any of your readers would like to receive them please send me an email at shanesemail2010@gmail.com and I'll add you to the list. I'll send some back attachments to get you started.

Dear Father,
By coincidence, my wife and I have been thinking of moving to Kells. One of our concerns was the quality of the parish life we might expect. Do you have any particular knowledge of Kells, or advice? Would you consider it a good place to raise a family?