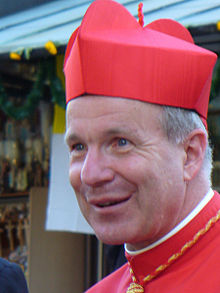 His eminence Christoph Maria Michael Hugo Damian Peter Adalbert Cardinal Graf von Schönborn, the third to be created Cardinal in his aristocratic family, is a man with an unenviable job to which he needs to bring all the diplomatic skills he can find in his armoury.

For a start, his two immediate predecessors hardly left him a smooth playing-field. The late (and some would say great) Cardinal König was one of the powerful liberal champions at Vatican II and continued to favour the cause with intelligence and vigour until his death in 2004 at the advanced age of 98, having governed the diocese of Vienna from 1956 until 1985. He was a great champion of Ostpolitik, the policy of detente with the Communist East, and this led him to welcome the election of Pope John Paul II, something he was later to regret when it became apparent to him that liberalism was going to be increasingly placed on the defensive. He became increasingly critical, even while in office, of the Pope, for, as he was said to see it, turning his back on the Council. He continued until his death to subscribe to The Tablet and correspond there. To his annoyance, his favoured candidate was not selected to succeed him; instead was chosen the disastrous Hans Hermann Groer, a man who was said by one writer (Hubertus Czernin, Das Buch Groer) to have abused up to two thousand young men.

Improbable as that figure might sound, people seem prepared to believe it, and so Groer is understandably now a focus of ecclesiastical hatred in Austria, and his perceived conservatism served only to persuade more to the other side, remembering the 'good old days' of Cardinal König, who remained alive throughout Groer's tenure of the office and this fact alone no doubt made life no easier for his successor. Rumours still abound in Vienna of Groer's partiality for women's clothing and handsome young men; whatever the truth may be (and to the end Groer denied everything) his memory is a painful one. A couple of years ago Cardinal Schönborn let slip (in the way he does) that the then Cardinal Ratzinger had wanted to have a proper investigation of the Groer scandal, but Cardinal Sodano used his influence with Pope John Paul to prevent it.

Schönborn followed an academic career, studying in the 1970s under Professor Ratzinger at Regensburg, his scholarly work culminating in his crucial role in the preparation of the new Catechism of the Catholic Church. In some ways the publication of the Catechism was a turning point in the history of the Church; although certain people believe it to be theologically deficient (from one perspective or its diametrical opposite), the overwhelming majority consider it a welcome restatement of the Catholic faith for the modern era. The English-speaking world has particular reason to be grateful to Schönborn for his assistance in ensuring that the new Catechism would not employ politically-correct language, but would rather seek to be accurate in the first place. This was almost the beginning of the fight-back that was to culminate in the publication of the 2011 Roman Missal which, for all its faults, is such an improvement on its predecessor.

It was not surprising that Schönborn became a bishop; he was consecrated in Rome in 1991, and appointed coadjutor of Vienna in 1995 in the shadow of the Groer debacle, succeeding to the see in the same year.

This is where it gets sticky. I think that Schönborn has had the most difficult innings of any Archbishop of Vienna, and quite possibly of any Western European see in the last couple of centuries.* The memory of Cardinal König and the contrasting example of Cardinal Groer served to give extraordinary impetus to the liberal cause in Austria. Schönborn in his pontificate has had to ride the bronco and try to hold together and if possible pacify a church threatening imminent melt-down. In order to do so he has had to be all things to all men; this is a very difficult thing to achieve. My experience is partial, but I have to acknowledge that although you will find him attacked from all sides on the internet (participating in a strange liturgical goings-on here, known to be in the intimate circle of the Pope there), those whom I have met who actually know him acknowledge the greatest respect for him—and these include a (very) liberal parish priest in Vienna and some (very) conservative Religious. And, more to the point, both parties are convinced he is on their side. In fact, I'm sure that the fingers of some readers may already be twitching to identify in the comments box this or that dreadful event at which Schönborn was present. **

Now, this might be duplicity, of course, but it might also be simple aristocratic diplomacy and good nature. It is the nature of the products of posh schools to be at ease in company, to speak to high and low alike with equal affability. And, simply, he seems to be a nice man.

He also seems to have some good ideas. Last week I met one of his seminarians; this young man had the highest regard for his Archbishop, who visits the Seminary almost every week, and makes it a kind of home from home. Each year he, personally, takes his seminarians on holiday for a fortnight, and in his company they have had access to remarkable sights and places. In other words, he understands what so many do not, that the relationship that a bishop has with his priests is a vital one, and if this present crisis in the Austrian Church can only be healed by personal charm, well that is better than schism. The Church has used it in the past to great effect (I think of Cardinal Consalvi after the Congress of Vienna) and it might serve well now.

We are all well aware of that group of priests in Austria who want to revolutionize the Church right now. I was interested to read in this week's Tablet that Schönborn seems to have negotiated their demands down to near-moderation. He seems to have made them feel heard and valued and all those other things, and to be well on the way to defusing a potentially highly explosive situation.

Which is all to say that though I have said in the past that what the Church really needs is passionate defenders of the faith, sometimes diplomats have their role, too.

* Well, okay, I suppose that the Archbishop of Paris who was murdered during the communes might have found things more difficult. And many of the Spanish hierarchy in the 1930s. and…………Look, permit me a little artistic licence!
** And there is his puzzling attitude to the business at Medugorje. I can't account for that.
Posted by Pastor in Monte at 22:30

I have read his book on the Christological background to the Iconoclast crisis and he is no dunce. You make a valid point about the need for diplomats - we have one as Archbishop in Dublin. Unfortunately diplomats can end up papering over the cracks which re-emerge later on with devastating effect. Unless the orthodox side of the Church is built up and her life nourished all the good will and diplomacy in the world will be of no good effect.

As you rightly say he has a difficult job but then what bishop today does not?

It does appear that there is an emergence of noted diplomats in the Catholic hierarchy of late. I would add Cardinal Dolan to Cdl. Schonborn and Ab. Martin of Dublin, which Br. Tom noted. One might even mention the Holy Father himself in certain respects. Though in the Holy Father’s case I would advance that his is a more robust diplomacy! No one should be in any doubt as to where Pope Benedict stands. The others…? Not so much.

Admittedly, I don’t understand Schonborn. I can respect him in some ways, but get mad at some of the things he has allowed to happen in his diocese. Undoubtedly his task in modern-day Austria is herculean and I wouldn’t want to be in his shoes. Your report of his interaction with his seminarians is encouraging and very like Cdl. Burke’s when he was archbishop of St. Louis. But there the similarity ends. Burke is no ‘respecter of persons’ and never shirked from laying down the law and would never countenance some of the goings on which Schonborn has. But then St. Louis - while was not without its own issues - is no Vienna, and Missouri is not Austria.

Dolan is another case in point on the diplomacy front. While in Milwaukee many wanted to see a firmer hand in dealing with the aftermath of the Ab. Weakland disaster. But while there were some attempts at that, he preferred a more conciliatory approach as in: the force of his personality. When it comes to Cardinals, Dolan is certainly sui generis. Who else would have introduced some humour into his address to the Holy Father and the assembled Cardinals prior to the Consistory? (his crack about wishing to be exempted from the “shedding of their blood” in the cardinalatial oath…).

Perhaps diplomacy will win out and we need more ‘diplomats’ like these.

I know people who live in Vienna, and one who has worked for the diocese. They all agree on one point: The only thing Cardinal Schönborn is interested in is pleasing everybody and making a good figure in the media.

I absolutely believe what you tell about the liberal priest and the conservative religious. But they will not have met the Cardinal at the same events, and he knows very well how to tell people what they want to hear. Especially before the Internet was widely used this worked quite well, but now the scales are falling off from many eyes.

Cardinal Schönborn will have blessings of gay couples in his Cathedral as well as having Medjugorje seers having apparitions.

He once managed to give a rousing pro-life speech to a group of pro-lifers and in the same month give an interview to Austrian media in which he told people that the Church has absolutely no intention of working for a change in the Austrian abortion law (which allows abortion on demand), because "the Church does not want to criminalize women who are in difficult situations".

Also, you should not trust the tablet. The "Pfarrer-Initiative" has not moderated anything. They are at the moment working on internationalizing their movement. Please notice that they are very open with what they are doing, while Cardinal Schönborn does absolutely nothing to stop them. You can read their manifesto here. Their boss is the former Vicar General of the diocese of Vienna.