Term has begun at St John's Seminary, Wonersh, and I have now delivered my fourth class on First Millennium Church History to the second-year students. Yesterday I launched them on their first experience of reading an ancient primary text with a historian's eye: I chose for this (as I always do) the Didache, otherwise known as the Lord's teaching of the Gentiles by the twelve apostles. 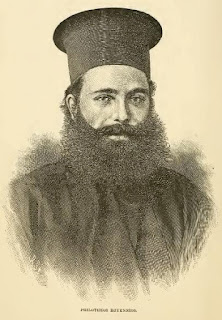 The Didache is a gift to Dan Brown-style conspiracy theorists, if only because of the strange story of its discovery. In 1873 the Greek Orthodox bishop of Nicomedia (a most ancient see now in Turkey—does it even exist any more?), Philotheos Bryennios discovered the text in the library of the Phanar in Constantinople, copied it out and published it. According to the tradition, he then promptly lost the original. That is the story as it is generally known.

What doesn't form part of the legend is that the text was found again, however, and removed for safety to Jerusalem. It forms part of a collection of writings of the Apostolic Fathers in Greek known as the Codex Hierosolymitanus; the scribe actually dated it to June 11 1056, two years after the Great Schism.

It was greeted with a lot of scepticism, since it would appear to be a first-century document suddenly appearing out of nowhere in a very late version. And faking documents was not an unknown trick a thousand years ago (for instance the Donation of Constantine, and the False Decretals of Pseudo-Isidore, both, though, western forgeries).

But bits and pieces of the Didache have emerged from other sources since, including some fragments from Oxyrhynchus, so it seems that the thing is probably genuinely ancient.

Here I always like to add a caveat. Just because it is genuinely ancient (and probably first-century), does not mean that it is Catholic. The most respectable and intelligent people still cling sweetly (Ah!) to the notion that because the Acts of the Apostles says that the disciples were of all one heart and one mind, that this undoubted state of affairs (it is in the Bible, after all) lasted for more than, say, half an hour. Otherwise sane people blithely assert that the early centuries of the Church were internally peaceful, pure, holy, undivided. That's rubbish! As nonsensical as the idea that early liturgy was simple and 'meaningful', the Eucharist celebrated squatting on scatter cushions round a coffee table with a bun and a pottery cup of wine, with Donovan singing sweetly to a guitar in the background. Both ideas are romantic nonsense, but it is surprising how enduring they are, and how much mischief these ideas have worked through the ages. So, the Didache is probably very ancient, but we mustn't automatically assume that whoever wrote it was a Catholic.

My (and others') unease about it mostly centre around the section usually titled (editorially, natch) 'The Eucharist'.

We thank thee, our Father, for the holy vine of David Thy servant, which Thou madest known to us through Jesus Thy Servant; to Thee be the glory for ever.

And concerning the broken bread:

We thank Thee, our Father, for the life and knowledge which Thou madest known to us through Jesus Thy Servant; to Thee be the glory for ever. Even as this broken bread was scattered over the hills, and was gathered together and became one, so let Thy Church be gathered together from the ends of the earth into Thy kingdom; for Thine is the glory and the power through Jesus Christ for ever..

But let no one eat or drink of your Eucharist, unless they have been baptized into the name of the Lord; for concerning this also the Lord has said, "Give not that which is holy to the dogs."

But after you are filled, give thanks this way:

We thank Thee, holy Father, for Thy holy name which Thou didst cause to tabernacle in our hearts, and for the knowledge and faith and immortality, which Thou madest known to us through Jesus Thy Servant; to Thee be the glory for ever. Thou, Master almighty, didst create all things for Thy name's sake; You gavest food and drink to men for enjoyment, that they might give thanks to Thee; but to us Thou didst freely give spiritual food and drink and life eternal through Thy Servant. Before all things we thank Thee that Thou art mighty; to Thee be the glory for ever. Remember, Lord, Thy Church, to deliver it from all evil and to make it perfect in Thy love, and gather it from the four winds, sanctified for Thy kingdom which Thou have prepared for it; for Thine is the power and the glory for ever. Let grace come, and let this world pass away. Hosanna to the God (Son) of David! If any one is holy, let him come; if any one is not so, let him repent. Maranatha. Amen.

But permit the prophets to make Thanksgiving as much as they desire.

Okay. Many, even most, consider that we have here the first 'Eucharistic Prayer'. You will see that it lacks the Words of Institution (or Consecration). In the 1970s and 1980s, on the back of this, several priests attempted to celebrate Mass using prayers without words of Consecration. The Dutch produced several 'Anaphoras' of this type. I remember when I was a seminarian a priest using one (in English) at my seminary. I refused to go to 'Communion' and got into a certain amount of hot water as a result. How times have changed (D.G.)! And, yes, I know about Addai and Mari, and that makes me very uncomfortable, too.

The problem is with the word 'Eucharist'. After all, it only means 'thanksgiving', in any context. Even modern Greek uses it to say 'thank you'. Does 'eucharist', then, necessarily imply the Mass?

The late and great Fr Freddie Broomfield considered that here we have not Mass, but a simple grace before and after meals (and remember that both chapter titles are not original, but editorial). I am not of this opinion, mostly because of the prohibition of eating 'of the thanksgiving' without having been baptised. If it was a prohibition of eating ordinarily with pagans I don't think it would have put it that way. So I think we do have a reference to the Mass.

But is it a liturgical document? A mini-altar missal, as it were. Here I disagree with most of the scholars. The whole Didache seems to me to be a catechetical document for those preparing for baptism. For layfolk, in other words, and Chapters 9 & 10 are to my eyes therefore for lay people to use devotionally at the Eucharist. There is no explicit Eucharistic teaching either, because in many Churches that belonged to the post-baptismal catechesis, or mystagogia. This seems to me to make far more sense.


Another thing sprang out of the document yesterday while I was teaching which had never struck me before. It happens sometimes that way. This comes from Chapter 1:


Woe to him who receives; for if one receives who has need, he is guiltless; but he who receives not having need shall pay the penalty, why he received and for what. And coming into confinement, he shall be examined concerning the things which he has done, and he shall not escape from there until he pays back the last penny.


And here's another translation:


when he is in tribulation he shall be examined concerning the things that he has done, and shall not depart thence until he has paid the last farthing.

and being in prison he shall be examined as to his deeds, and "he shall not come out thence until he pay the last farthing.


Interesting. Do we not here have a clear enough reference to Purgatory? In the first century!

I do hope you will put up more posts like this. SOOOoo many times when there are 'adult classes' to learn more about the church in parishes and the like, we are met with material small children should have been taught. One may as well get up and walk out if one hears 'Do you know that the 4 gospels weren't all written at the same time.' They always start from square one, never get to square two. Maddening that all adults are treated as simpletons and novices.

I wish your classes were available on line a la MIT courseware. What is your reading list for the class and the syllabus?