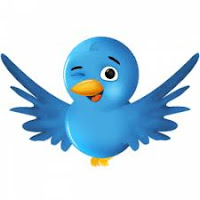 The Holy Father using Twitter has brought a number of responses from the Blogosphere, not least Mulier Fortis' Habemus Tweet.

I'm sure we can do better in Latin than 'tweet', though.  My mind goes cranking back thirty years to reading Catullus about Lesbia's wretched dead sparrow*. There we find in Lugete, o Veneres Cupidinesque (poem 3)

Now someone who's Latin is better than mine ought to make a noun out of it. Pipia? So Habemus pipiam?


* and yes, I know it might mean something else, so don't bother posting rude comments.
Posted by Pastor in Monte at 21:00

...Pipiatum? (lit. a thing having been tweeted)?

On my own blog I used the form pipio-pipire-pipivi-pipitum, which I found at
http://www.verbix.com/webverbix/go.php?D1=9&H1=109&T1=pipio

My knowledge of Latin is so dire that for many years the only response in the Mass that I knew was "Kyrie eleison"...

Thanks for the plug, Father!

I was going to point out Eccles' usage, but I see the magister himself has dropped by to speak in propria persona.

Oxford Latin Dictionary gives pipulus (m.) or pipulum (n.), "a shrill or piping sound". (Either form would of course appear the same in the accusative, i.e. "Habemus pipulum".) The authors cited are Plautus and the 2nd-c. AD rhetorician M. Cornelius Fronto.

"… someone who's Latin is better than mine …"

(And in case you're wondering: yes, that middle "P" in my initials does stand for "Pedant"!)

By analogy with "multa mentiri" - literally: "to lie many things" meaning "to tell a lot of lies", I would suggest that tweet is deponent in Latin, pipiari, and that people tweet many things, as it were: :Nudiustertius Papa BXVI pipiatus est aliquid". On the other hand, perhaps not.

IIRC, Fr. Zed has proposed pipitus, so the first papal tweet would be the "pipitus primus pontificalis".

How about pípulum, -i, for "tweet" as a noun? It sounds about right to me.

Oh for a judgement from Fr. Reg.