Well, it has been astonishing, hasn't it? Yet again Pope Benedict takes the world by surprise. When the Archbishop of Canterbury retired there was a five minute slot on the BBC news; today there seems widespread amazement. I've just been to get my hair cut, and in the barber's shop the radio, a day after the announcement, was full of chatter about Pope Benedict and the succession. The man in the chair next to me started to go off on one about the Catholic Church, and how all priests were sex offenders; meanwhile the barber, who knew very well who I was, was desperately trying to head off the conversation without causing offence to either of us; in a way it was rather comic.

Then I went to the co-op to get some Shrovetide supplies, and saw the newspaper headlines. Most of them were respectful and interesting-looking, and the main cover story. But these two caught my eye (I had my iPhone handy): 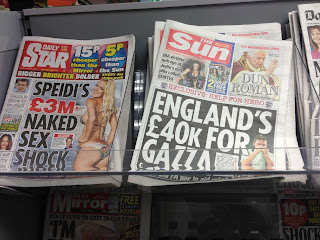 I chuckled out loud at The Sun's dreadful Dun Roman pun, but noticed that Gazza's £40k takes pride of place. As for The Daily Star: well, the parish secretary (a devotee of fly-on-the-wall TV) told me that Speidi apparently is two people from Big Brother whom everybody knows–apart from me apparently. Which Speidi half the picture shows, I couldn't say. In her turn, she said that she had been listening to the Pope's brother; she asked me his name, so I said 'George'. 'No', she said, 'what's his other name.', 'Er, Ratzinger…'. 'No, no' she said'; that isn't the name'. 'Er…' I said again. 'I've got it' she replied, 'Lombardi'!
So it was one all: Speidi for her, and Ratzinger for me.
Posted by Pastor in Monte at 13:25

At least the Sun had the decency to put the Holy Father on the front page unlike to Daily Mail which today has huge headlines about spag bol being made of horsemeat and of course a picture of an actress. And Pope Benedict? Pages 8 and 9. But then having read many anti-catholic comments on the DM website (and they say they were monitored too) I suppose this was to be expected. (One actually wrote 'Good riddance' and this was allowed so so much for monitoring.)

I'd like to have been a fly on the wall listening to your tactful barber!

I'd have the urge to wash my hands after touching either of those papers. Could contemporary culture be any more vulgar and salacious?

Childermass, yes, it could. We're headed there fast but we're not there, yet.

Amused by Childermass comment as my sons have always criticised me for reading the Mail. But there are columnists I enjoy reading and not too difficult crosswords to keep the brain ticking over!

One of my sons reads the very anti-Catholic Guardian which I would not touch with a barge pole. I remember reading somewhere that to read the Guardian for accurate news on the Church was like reading Mein Kampf for information on cricket!