Our Sydney Correspondent on Jet Lag, WYD, and Miraculous Snow 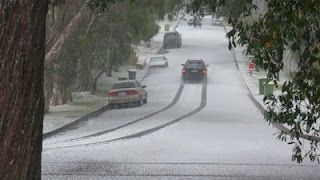 I thought I'd give you Andrew's letter in full, as it touches on lots of items in other posts.

Bentornato - there doesn't seem to be a concise English equivalent to the Italian phrase!

I too am familiar with jet lag, flying over 200,000 kms every year. Most of these trips in my current role are to East Asia where there is only a 2-3 hour time difference from Australia, but 4-5 times a year I go to the East Coast of the US, where it is virtually opposite with a 14-16 hour time difference. Strangely, this does not seem to affect me nearly as badly as trips to Europe (8-10 hour time difference). That could be just the sheer length of the flight - you are exhausted when you arrive, and sleep like the dead on arrival. And it is a known fact that travelling westwards produces less of a jet lag effect than travelling eastwards, so it's always worse getting back to Australia. In 2004-5, I had a major client in Milan, and ended up making 11 return trips from Sydney to Milan in a year, so was permanently jet lagged like your cousin. I felt out of sorts for quite a while after the assignment ended, I can tell you. I also swear by melatonin - it doesn't prevent me waking in the night, but enables me to get back to sleep easily.

I am also of the view (not scientifically proven) that there are several other factors involved in long haul travel which combine to make you feel a bit ordinary on arrival: the extremely dry atmosphere on the plane (compensate by large intake of water); the roaring noise (compensate by wearing noise cancelling headphones - Bose are expensive but excellent - and soothing classical music on your iPod); the effect in the body at travelling at such high speed for long periods (no known remedy). And if you do end up wide awake in the wee hours, the best thing is to fight back by having something to eat (I thoroughly recommend a cheeseburger and beer if in the US), and I can usually get back to sleep. Doesn't do much for the waistline though..... The very worst thing about jet lag is the 3PM wall, where you just feel like crashing. A cup of tea usually helps.

I feel I owe you a final review of WYD. The general consensus is that "hard-bitten" Sydney was on the whole delighted to find itself host to hundreds of thousands of happy and enthusiastic young people, all thoroughly enjoying themselves WITHOUT being on drugs or alcohol. Public transport rose to the occasion and the normally traffic choked streets of the CBD were reclaimed by smiling youths. And despite the presence of quite a number of demonstrators (mainly against the Church's stand on homosexuality and birth control), the pilgrims waved back in good natured and friendly greeting. There was only one arrest reported, of a young Australian pilgrim who took issue with a demonstrator. Pope Benedict gave a stellar (and energetic) performance and came impressed all as a very principled and kindly man. The papal mass at Randwick racecourse was a great success attended by over 400,000 people, and covered live on television.

The Pope's forthright and unequivocal apology to victims of clerical abuse was very well received, although there were complaints that not all victims got to meet him personally or to attend the special mass held for this. It was also commented on in the press that what the Catholic Church now needs to do is to deal with such cases humanely rather than throwing armies of lawyers at any claims (which certainly seems to have been the case).

We also had the pleasure of seeing our eldest son on television in the large choir (consisting in large part of pupils from Sydney's Catholic schools) behind the Holy Father as he celebrated mass. Our son reports that this honour was - almost - worth missing most of the WYD events in endless choir practice! And finally, the whole event was blessed with superb Sydney winter weather - mainly blue skies and strong sunshine with warm daytime temperatures. Even overnight temperatures of 7 degrees C did not dampen the enthusiasm of the pilgrims who slept in the open the night before the Papal mass.

Talking of weather, the attached pictures show a sight you don't see very often in Sydney, apparently a snowfall (last recorded in 1836). Yesterday afternoon around 4 PM, the sky turned (literally) black, the temperature plummeted and within 20 minutes the streets were covered with what looked like snow (which remained on the ground overnight) in several northern suburbs of Sydney, including where I live. Unfortunately the killjoys at the weather bureau advise that it was not in fact snow, but rather "soft hail" - apparently the difference is that it did not fall as snowflakes. Try telling that to the neighbourhood kids, who leapt into action building snowmen, throwing snowballs and trying to use surfboards as makeshift sledges.

All very exciting and dramatic especially in a city that rarely even sees frost.

Andrew
Posted by Pastor in Monte at 08:55

It was also commented on in the press that what the Catholic Church now needs to do is to deal with such cases humanely rather than throwing armies of lawyers at any claims (which certainly seems to have been the case).

I would certainly like to see genuine cases of abuse dealt with humanely- does that mean no investigation - and proven offenders handed over to the civil authorities but that need not mean the bankrupting of dioceses and millions of dollars of settlement per person. As for the cases of abuse which happened half a century ago are advanced when the alleged abuser is dead as are any witnesses those cases be investigated by lawyers.