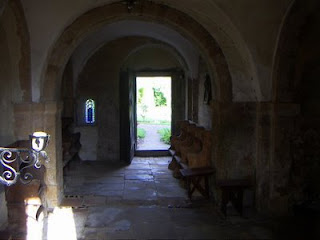 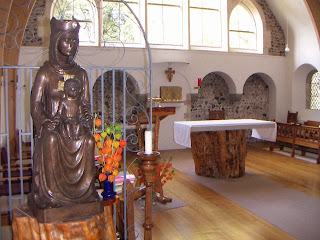 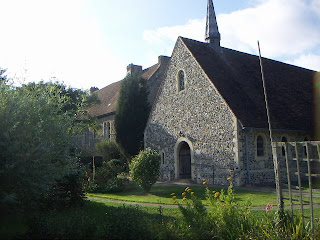 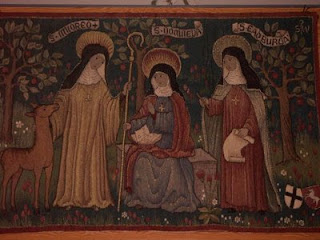 I've been spending my few days of Retreat at St Mildred's Abbey, Minster, on the Isle of Thanet in Kent. For those who aren't from round here, that is near Dover, the nearest point to France. St Augustine landed here to bring the Gospel to the pagan Saxons of the Kingdom of Kent; there is a commemorative cross very near the Abbey.
The Abbey was founded only a couple of generations after St Augustine, and was peopled by nuns including St Domneva, the foundress; her daughter St Mildred, and St Eadburga, until the Vikings drove them out. In later years, the Abbey was refounded by Benedictine monks, who remained until the Reformation, after which some of the conventual buildings were converted into a manor. In the late 1930s, the Benedictine nuns of Eichstätt courageously circumvented the political turmoil of the days and refounded the Abbey (though at the moment it is technically a priory)—these days the twelve sisters are mostly English (though the young Prioress is German) and carry out the opus Dei of the canonical hours and the hospitality for which the Benedictines are famed.
They have a website here, and I commend them much to your prayers. It is very good to find such a flourishing witness to the Benedictine life alive and well in the South East. With Minster Abbey and St Cecilia's Abbey at Ryde on the Isle of Wight, we are very blessed with good Benedictine nuns in this part of the world.
Posted by Pastor in Monte at 15:35

Welcome to the area.