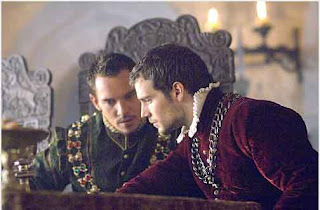 When the new BBC drama, The Tudors, began its first season, I watched the first episode, and half of the second, whereafter I gave up in disgust. The phrase 'gratuitous sex' doesn't even begin to describe what I thought was the ill-concealed soft porn nature of the programmes.
A few weeks ago I happened to see an episode of the second series. As there wasn't any porn on display, I continued to watch. It would be an exaggeration to say that I was hooked, but I have continued to watch the subsequent episodes, even catching up on iplayer. I am forced to acknowledge that it 'has something'.
I say that reluctantly, because there is a lot that annoys me. The producer/ director/ writer/ whoever goes to enormous trouble to get some things very very correct—more accurate than any other version I have seen. But then there are such liberties taken with the history, the dress, the manners and even events.
What I think it gets absolutely right is the spirit and atmosphere of the time. And some of the characters are very well written and played. Fat and ugly Henry, played (oddly) by slim and beautiful Jonathan Rhys Meyers, is very well done. The slow decline from his virtuous, if extravagant, beginnings to increasing selfish wilfulness and self-deception, from the Renaissance Prince to cruel tyrant are beautifully portrayed. Maria Doyle Kennedy, playing Queen Catherine of Aragon is wonderful. Throughout she is a model of dignity and injured love, steadfast in her faith and loyalty to God and the King. The deathbed scene would make a stone weep, though the random bits of Latin torn out of liturgical context and prayed by stumbling ladies in waiting are a bit of a distraction. Anne Boleyn (played by Natalie Dormer) is a strange character. Beautiful, wilful, spiteful, ambitious, proud—yes, all these things came through clearly. But then her sudden accesses of piety were not worked into the character; in exhorting her servants to read the Bible provided for them, to attend daily Mass and to ask for the sacrament in her prison chamber; these seemed not to belong to the character, but were rather mechanical. Maybe they were trying to portray her as hypocritical in this regard, but I'm not sure that's true to Anne. Her faith was genuine, though inclined to the reform, in which, I believe, she was to influence Henry towards his usurpation of the supremacy, via her gift of Tyndale's book, the Duty of a Christian Man.
St Thomas More, played by Jeremy Northam, is also very well and sympathetically done, much of the dialogue of his trial and execution lifted directly from the various contemporary histories of More. (And then, all of a sudden, they had him pulled on a hurdle to the scaffold!)
Churchmen, it has to be said, are not well done. The Pope, Wolsey, Campeggio, even Cranmer are all, frankly, miscast, wrongly dressed, and unbelievable. Cranmer, played by Hans Matheson, is too young, too hairy, and far too un-ecclesiastical for the role. He looks like a twenty-something boybander wearing a strange anachronistic purple costume uncomfortably.
In fact, the odd thing is that all the characters are improbably beautiful. Maybe the justification might be that in his age, Henry VIII was flattered for his good looks, so he should be played by somebody thought beautiful in our age. Well maybe. If a woman can play King Lear, then I suppose Rhys Meyers can play bluff King Hal, and Charles Brandon be played by handsome Henry Cavill. That's the two of them in the picture. (And why does his wife, Henry's sister, not know French when she meets the ambassador? She had been Queen of France, for heavens sake, married to Louis XII!)
And there is still some violent sex. Shut your eyes, is my advice.
Posted by Pastor in Monte at 08:44

I was surprised by St Thomas More and the hurdle too and that he was portrayed very sympathetically.

I was expecting him to be the cruel persecuter of free thinking Protestants.

I see that you've very kindly added a link to St Ann's on your sidebar under 'Diocesan Lynx.' I wonder whether you realise that you have actually linked to our parish web site rather than our blog.

Father, you have more patience than I do -- I didn't even make it through the first episode. IMO, the new Tudors doesn't come close to the BBC's 1970's miniseries, The Six Wives of Henry VIII. Jonathan Rhys-Meyers' portrayal of HVIII is nowhere near the brilliance of Keith Michell's work, which takes into account Henry's progressive physical/spiritual deterioration much more effectively. Even the supporting characters, such as Cranmer, bear a more accurate physical resemblance to the historical figures, and the story, which never tries any too-clever-by-half "naughty bits", just follows the historical course of events. The current series is just a lurid "historical"soap opera. And it's pretty anti-Catholic, as well. But chacun a son gout, I guess.

You mention the gratuitous sex, Father, quite rightly - but what about the gratuitous violence? Tudor executions were pretty awful, I am sure, but all the condemned were blindfolded first - a detail this series neglects. But like you, I too am hooked.... I even felt quite sorry for Nan Bullen, which was a first with me. I was intrigued by programme's psychological insight into Henry's desire to get rid of his wife: the whole thing had a rather disturbing "snuff movie" feel to it. Was Anne really a victim of domestic violence...? I could go on - but won't!

Mm, yes, I agree about the improbable domestic violence. i think it's on a par with the improbably sexiness of the whole thing. And, yes, they did make Anne somehow sympathetic at times, which is probably just, but they didn't skimp either on her ambition or capriciousness. I think we have always known that she was guilty of all sorts of things, but not the things she was executed for.