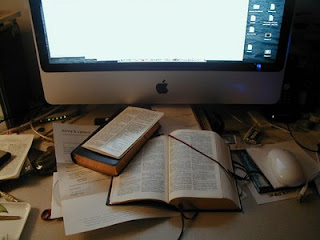 Well, my new breviaries have arrived, and I'm delighted. Since my ordination twenty years ago I have been using a set of breviaries produced then by the Society of St Pius X, and which went out of production shortly afterwards. It is a photographic reproduction of the 1961 Mame edition, superior in almost every way to the Fraternity of St Peter's Dessain reproduction which has been available since. The problem was that these breviaries were like house bricks, comparable in size to the modern English breviaries—most impracticable when travelling. For this, I have a most beautiful small set produced by Pustet, (original, not photographic) though, alas, with the Pius XII psalmody. I received it in mint condition, too, never used.
But now I have a set that does everything. The new edition, from Nova et Vetera, a new German publishing house, is quite lovely. The cream-coloured paper is thin, but opaque, and thus the book is (Deo gratias!) lightweight, lying easily in the hand. The typesetting is clear and easily readable, despite the fact that it is printed in relentless double columns throughout. The rubrics are not really ruber, but rather a shade of brown; this may have been a mistake; a typesetter forgetting that what looks one colour on white paper looks different on cream, or in fact it may be deliberate, for it looks very attractive—just different. It is bound in black leather (real!) and the edges are gilded all round—what a pleasure to have to blow the pages apart for the first time of use.
I can detect no mistakes in the Latin so far—well, all right, only one, a small one. At Matins this morning (Advent Sunday II) we had a 'hedo' rather than a 'haedo', and the mediaevals wouldn't have thought it a mistake anyway. And there was no antiphon for Prime or Terce, though the antiphons suddenly reappear for Sext and None. This is not a disaster as long as one knows that the antiphons are simply those of Lauds in turn. A reminder to say the Pater Noster before the readings of the Nocturn would be a good idea, though anyone familiar with the traditional breviary would know this anyway. Prime is a little confusing; the changeable bits and the unchangeable bits are all in the same size, spacing and typeface, which means that, again, you need to know where you are going. So what I'm trying to say is that I, as a habitual reciter of the traditional breviary, find this new set a real delight. I'm not sure that a newcomer would find it so easy to use at first.
But, beyond any doubt, Nova et Vetera are to be congratulated on producing not just another traditional breviary, but editing it from scratch, and coming up with a version that knocks all other available versions into a cocked hat, new rite or old.
The breviaries cost me E198, and I was able to order alongside them a set of US propers (there are, alas, none for the UK yet) and, mirabile dictu, a booklet with the original versions of the hymns, something I blogged about a few months ago.
Update: having been away for a couple of days, and having taken my little Pustet with me, I have realized that Nova et Vetera have simply copied the Pustet arrangement—a sensible thing to do, on the whole, since, as I said, the Pustet is very elegant. It's a pity they didn't improve on the Pustet's shortcomings regarding clarity and ease of use.
Posted by Pastor in Monte at 07:28

:-D an early Christmas present to yourself. And the best thing is it's exactly what you want. :-D

Enjoy in good health. Hope the thin pages hold up okay for you.

Sean, I'm delighted to see that your desk seems to be as messy as mine!

I know exactly what you mean about the joy of a quality bit of printing on decent paper with a proper leather cover.

Apropos of which, if like me you persist in writing notes with a fountain pen, there is an excellent firm in London, Smythsons of Bond Street, which produces a range of high quality leather bound notebooks, on thin light blue paper which is so well made that the ink does not go through to the other side (unlike most notebooks). They are ferociously expensive, but a worthwile indulgence as they contain so many pages the A4 version lasts me about a year.

It still has the urbanised hymns, though.

My Nova et Vetera set arrived yesterday. Like yours, it had the Wagnerian "hedo" instead of "haedo", but the antiphons for Prime and Terce were there. Odd, but I suppose inconsistencies are only to be expected. Of course, we all have our preferences, but I think the "Pustet/N&V" arrangement of the material is superior to that of the Mame (which I have used until now) and increases ease and clarity of use. I think any newcomer to the 1962 breviary is going to need a bit of tuition and the N&V breviary is easy to negotiate once you know your way around.

I must say that one of the advantages of the 1962 breviary is that the user is freed from the dreadful scruple of having to "get something" out of it. You can say it (or part of it) and know that it has an objective value quite apart from your subjective appreciation of it. The compilers of the 1970 breviary by contrast seem to say "Look, we've cut it right down so that you can say it slowly, so your jolly well going to have a positive experience of saying it every time, and if you don't there's something wrong with you".

There is also less stress in the rubrics on saying the Hours at the correct canonical time. I know that this is the ideal, but there can be few of us (clerical or lay) who have the leisure to do this. So if the morning is the only time you have for prayer during the day, you can say Prime, Sext and Compline before breakfast, knowing that it is the correct canonical time somewhere in the world and that, when the "flammas litium" and the "noctium phantasmata" do come to haunt you during the course of the day, the Lord, who exists outside of time and space, will have heard your prayer and will come to your aid.

Urbanised hymns and missing most of the second and third nocturn readings from the Old Rite for most of the year.

They are splendid. There are one or two odd bits. The missing antiphons as you say. The doubling up of the first line of the Gloria Patri after the Benedictus on the laminated sheet, and the collect on p 14 which has periulis ( a missing C). Also please note the invitatory antiphon for the common of virgins has Regem Martyrum instead of Virginum. BUT - many of my 1950s books are riddled with mistakes too, and so these are no problem. The breviaries are SPLENDID and much much better than the photographed FSSP bricks I have been using. Hurrah for N et V
Fr AR

Oh yes... the feel and the smell and the whole delightful experience of using beautiful new liturgical books.

It's the only thing I miss, in Orthodoxy, languishing amidst atrociously produced, typographically hideous, mostly American editions.

Oh well...at least I won't be spending a bunch of money I don't have...

Mine arrived last week too, a birthday/Christmas present from my father, who wasn't quite sure what it was I was asking him for.

As you say, they are high quality in both materials and lay out. I'm scared I might rip one of the pages, especially as they "stick" together at the moment due to the books' newness.

So far, I use the N&V books for Compline and offices of our Lady and of the dead, but for the time being, the Pauline breviary will have to remain normative; but, little-by-little.

Well, I'm very pleased to hear of the good quality, Father. I think I might have to buy myself a set for my birthday one day, or something....!