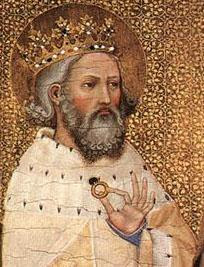 According to the Martyrology, today is the feast day of St Edward the Confessor:

Well there we go. Silly me. I always thought his feast was in October. There's quite a lot of this arbitrary moving of feast days in the current martyrology, for no apparent reason. There can sometimes be a minor ancient feast (the translation, or reburial, for instance) but neither my Sarum calendar nor the Hereford calendar note it, today being simply the octave of St Thomas Becket. This shift is particularly puzzling as it isn't as if St Edward were a nobody: his feast was kept in the universal calendar (if only by way of commemoration) right until the 1969 reform.
For once the English and Welsh Episcopal conference have been sensible and continue to keep St Edward on his traditional day in October.
Posted by Pastor in Monte at 06:55

( Both Feasts are kept at the Collegiate church of Saint Peter in Westminster. The Traslation is listed in the Kalendar of the Book of Common Prayer )

Westminster Abbey appear to be having a 'first Evensong' of the Epiphany this evening (looking at the music), no mention of St. Edward - I think I shall go and see if St. Edward gets a mention.

Alas I was unable to find out what happened at Westminster Abbey on Monday as a kind person donated a Christmas tree that I set up for Old Calendar Christmas.

Looking at the Abbey's service sheet on Friday, when I visited with a friend, the texts for Monday were all of the Epiphany with no mention of the die obitus of St. Edward. He may have been mentioned in the prayers after the anthem but I know not.

Thank you for the interesting post - I had no idea that Monday was the anniversary which suggests I should read the Martyrology more often.