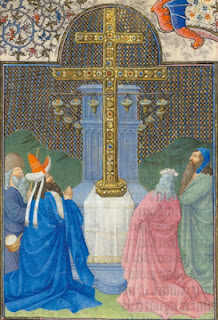 I know I'm a day late with this, but I think it's worth posting about. For most of my priestly life I have used the traditional breviary, but since getting ill, I have reverted to the modern English breviary, simply to make sure that I get it done. Yesterday's Office of Readings had a meditation on the Holy Cross by St Andrew of Crete, and the whole office and Mass had a sense of Good Friday about it—understandable in one sense, particularly when taken with today's feast of Our Lady of Sorrows (or the Seven Sorrows, if you prefer).

When I was in my second parish as a curate, I remember celebrating the feast of the Exaltation of the Cross, and placing out the church's relic of the true Cross for veneration. After Mass a screeching whirlwind swept into the sacristy while I was unvesting, and I knew I was in for it (again). We had a parishioner there, a wealthy professional lady who lived in the most exclusive district of the city, who assuaged her conscience about her large house, her smart car and her yacht by expressions of outrage if ever she saw the clergy with a new pair of shoes, or noticed a new set of vestments in the church 'while there are people starving in the world!' 'The Church should be poor', she would fulminate. Anyway, on this occasion, she screeched that I had destroyed the feast for her. 'This feast isn't about dubious relics!', she lectured me, 'it's about the poor and suffering in the world; it's about the handicapped, about those who have nothing.' And she swept out, no doubt to vent her outrage about the disgraceful curate to her friends over cappuccinos and croissants.

But, you know, she really was wrong. Actually, the feast is neither another Good Friday, nor about the poor and handicapped (apart from the sense that anything connected with the Cross can be said to apply to these), but really is about the relic itself.

The Roman Empire, for most of its history, had two main Nemesisses (anyone know the plural for Nemesis?); one was the Germans (a kind of loose term for all the tribes north and east of the Rhine), and the other was the Persians. By the time of the Emperor Maurice (reigned 582-602) in Constantinople, the various 'German' tribes had pretty well had their way with Rome and the West, and really there was only the East left. But the Persians were pretty frisky at that time, and the Byzantine Empire was weakened by plagues and famines, and taxation and civil wars. Maurice presided over a period of almost unremitting turmoil in the Empire, but was a vigorous and capable Emperor. Amongst other things, he established local governorships called Exarchates in which local Exarchs could take a certain amount of initiative in resisting the pressures that threatened the Empire. The Exarchate of Ravenna, for instance, had a measure of success in resisting the Lombards. Finding his health failing, he also began to take steps to divide the Empire into West and East again, to be ruled by his sons.

The Slavs began to make their presence felt, pushing down into the Balkans during this period. But the biggest pressure, however, came from Persia under Hormizd IV. He was overthrown in a coup, and Maurice helped a general called Chosroes to ascend the throne as Chosroes II, sealing a pact of friendship with him by marrying off his daughter to Chosroes. This freed him up to, fairly successfully, tackle the Slavs in the Balkans. In 602, however, he left the army in the Balkans (it was cheaper than bringing them home), which proved to be a mistake. The troops wanted to go home, and so elected Phocas as their candidate for Emperor, marching on Constantinople. Maurice was murdered — It is said that he was forced to watch the execution of his 5 sons before he himself was beheaded—his wife and daughters were sent to a convent. This was the first violent coup in Constantinople itself since the time of Constantine, and it is said that Phocas took considerable violent measures to sustain his control on power. Chosroes took the opportunity to invade.

Phocas (602-610) was popular in Rome; there is still a column in the Forum called the column of Phocas, and in 609 he gave the Pantheon to Pope Boniface IV to become the church of St Maria ad Martyres, a fact that preserved it for us. Hundreds of bodies were brought from the catacombs and reburied there—they had been under threat from invaders (first ‘barbarians’ of various types, then Saracens), since the catacombs were outside the city walls. Pope St Gregory fulsomely congratulated Phocas on his accession, and indeed he was popular in the early part of his reign for lowering taxes.

In 608, a father and son both named Heraclius (the Elder had been appointed by Maurice Exarch of Africa) began to revolt in Africa, issuing coins with their images, dressed as consuls, on it. Phocas responded by pulling the widow and daughters of Emperor Maurice out of their convent and executing them. Civil war broke out in the East and was so brutally repressed that popular opinion turned to Heraclius; with this distraction, the Persians, who had already advanced to the Euphrates, began to move into Anatolia. The younger Heraclius then advanced to Constantinople, 610, whereupon Phocas’ supporters deserted him, even Priscus his son-in-law. Phocas was captured and brought before Heraclius, who asked, "Is this how you have ruled, wretch?" Phocas replied, "And will you rule any better?" Enraged, Heraclius personally killed and beheaded Phocas on the spot. Phocas's body was mutilated, paraded through the capital, and burned.

Heraclius (610-641)took over the Empire in a desperate condition. Phocas, having used the Balkan troops to seize the throne, had abandoned that area to the Slav Avars. Chosroes, who had a pretender to the throne of Byzantium called Theodosius (who claimed to be a son of Maurice), also refused to recognize Heraclius as he had refused to recognize Phocas, and continued to march into Roman territory, despite Heraclius’ overtures of peace. 613, the Jews helped Chosroes to take Damascus—they also lynched the Patriarch—, and in 614 took Jerusalem, damaging the Church of the Holy Sepulchre and, crucially (no pun intended), capturing the Cross which had been discovered by St Helena, the mother of Constantine, three hundred years or so earlier, which had been kept in great veneration in Jerusalem, no doubt in the Church of the Holy Sepulchre.

The Cross was taken off to Persia as a trophy of war. A vast number of prisoners, too, were carried off from Jerusalem; figures vary from 35,000-60,000. Then the Persians took Egypt, including Alexandria, possibly being responsible for destroying the famous library, and certainly interrupting the grain shipments to Constantinople. They raided deep into Asia Minor, and even reached as far as Chalcedon, on the Asian side of the Bosphorus—it is said that the terrified inhabitants of Constantinople could see the Persian army’s fires from their walls. Even more terrifyingly, the Persians opened negotiations with the Avars. Heraclius considered moving the capital of the Empire to Carthage, where he had come from, thus abandoning the East altogether, but was dissuaded by the Patriarch Sergius I.

Instead, Heraclius concentrated on quietly building up the army. He then embarked on a brilliant coup. Instead of struggling to win back the lands that the Persians had taken, mile by mile, which would have been probably fatally exhausting, he relied on the fact that the Persians had put all their strength into taking those Roman provinces and holding them, and so he simply marched on Persia itself, leading the troops into battle himself, having done a deal with the Turks to invade Persia from the other side. He also neutralized a Persian general called Shahrbaraz by convincing him that Chosroes hated him and had ordered his execution.  At the Battle of Nineveh, 627, Heraclius decisively defeated a large Persian army. Chosroes refused to sue for peace, so Heraclius marched on Ctesiphon, the capital, whereupon the Persian nobles deposed Chosroes and appointed Kavadh II, who made peace, restoring the Roman Empire’s former territories.

That Christmas, Heraclius, who now took the Persian title ‘King of Kings’ (a title, as basileus, that was to be used by all Emperors instead of ‘Augustus’ for the next 800 years) celebrated the feast in the Monophysite Cathedral at Kirkuk. The Cross was restored in triumph to Jerusalem on 14th September 630, now celebrated as the Exaltation of the Holy Cross.

And that is what the Feast of the Exaltation of the Cross is all about.

Of course, the juice and joy was short-lived, for in the same year of 630, when the Cross was restored to Jerusalem, Mohammed led a force into Mecca and captured it, converting the population to Islam.  He died in 632. Four years later, in 636, (still under Heraclius) the Byzantine Empire, exhausted by its fight with the Persians, was defeated by the Islamic forces at Yermuk, and by 632 the Moslems had captured Mesopotamia, Persia, Roman Syria (including the Holy Land) and Roman Egypt. Except for the time of the Crusades, (and arguably 20th century Lebanon) these lands were never to be in Christian hands again.
Posted by Pastor in Monte at 21:19

I think the plural of Nemesis should be Nemeses, if we use the Latin endings as it is customary for Greek names.
Nice historical post, Father!

How about the plural of cappuccino being cappuccino?

Thanks for all the detail, Father. the only silver lining I can see re: the modern troubles with the Mohammedans is that at least the Protestants have stopped yammering at the Catholics about 'the Crusades.' I think now they think 'maybe the mackerel snappers had something there after all.'