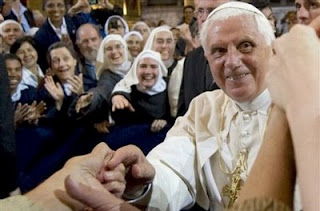 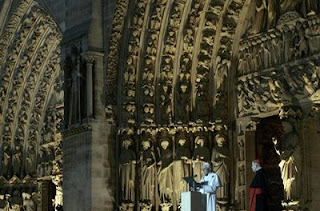 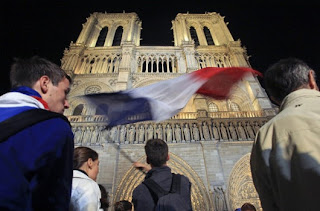 Andrew Cusack has posted a really good account of Pope Benedict's visit to Paris. I'm grateful to Fr Tim for pointing it out on his blog.
Posted by Pastor in Monte at 09:49

This is indeed an excellent photo record of Pope Benedict in France, and thanks to Father for the link.

I don't know how the Pope's words his words will affect laicite, or what the French bishops will do next, but the French people certainly turned out in droves.

Incidentally, I noticed the "Benedictine arrangement" of crucifix and six candles looked fine on the table altar in Notre Dame, even though it is one of those small square altars which the French seem to like. No suggestion of the "clutter" which Cardinal Vingt Trois was said to be so concerned about.

I am curious to know why there seem to be no comments in the Catholic blogosphere on the visit of Pope Benedict to Lourdes?

I watched the Paris Papal Mass in a cafe-bar in Lourdes and the owner actually turned the sound up for those present when a couple started chatting rather loudly! But watching on television was not the 'real thing' which I was privileged to experience over the following two days.

Having arrived in the Prairie before dawn on the feast of 'La Croix Glorieuse' there was a wonderful atmosphere of recollection, anticipation and joy.
And when the Holy Father arrived in his Popemobile and traversed the field everyone sang with great gusto 'Pierre, tu es Pierre...'. A moving moment indeed.

The music throughout was sublime with the Latin Gloria, Credo, Sanctus, Pater Noster etc interspersed with well known French hymns. The Angelus (in Latin) followed - it was by then mid day and most of us had been there six hours or more.

Monday, the feast of Our Lady of Sorrows, saw many of us again in place by 6 am this time in front of the Basilica of the Rosary. The 'Stabat Mater' was sung in full by the choir in Latin and the Canon of the Mass was also said in Latin.

There were comments in the French press about the long and perfect silence during the adoration of the Blessed Sacrament on Sunday afternoon. And in fact the different periods of silence during both Masses were extraordinary to witness in such a large crowd. I understand that Pope Benedict wants to bring in more silence to the Novus Ordo and there in Lourdes could be seen that the whole congregation welcomed and prayed that silence.

The Holy Father gave his blessing (in Latin) after the torchlight procession and this was followed, as usual, by the Salve Regina.

After the Pope's Masses in America, there was much comment about the dreadful music used. With such beautiful music at these two Masses in Lourdes I am surprised not to have seen any comments.

I recently recommended to a friend the post on the Carmelite relics and have re read some of the other Valle Adurni posts from that year including this one bringing back memories of the visit to France of Pope Benedict in 2008.

I see that PeterHWright mentions the Benedictine arrangement on the Altar in Notre-Dame. I have attended Sunday Mass there many times but have yet to see the Benedictine arrangement which must have been done specifically to please Pope Benedict. The altar is normally bare - the only candles being the very tall ones on the floor on either side of the sanctuary. As the commenter says Cardinal 23 does not like what he terms clutter on the altar. And as for what can only be called a 'dinner gong' at the Elevations, words failed me the first time I heard it and it jars on every occasion. Surely they must have a proper set of bells hidden away somewhere?

As a matter of interest I watched some of last nights Vigil Service in Notre-Dame today (it is available on KTO on the internet) and the altar was still bare. At the Vigil I attended here last night in a small church in England the two altars were magnificently lit by many many candles. Quite beautiful.