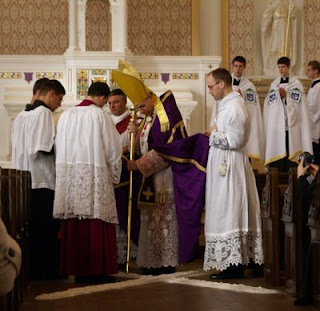 Lovely to see those pictures of the consecration of Old St Patrick's Oratory in the Extraordinary Form on the New Liturgical Movement site, here. It all looks very splendid.
Shawn Tribe writes good notes on the ceremony, addressing, of course, the strange custom of the bishop writing out with the point of the crozier the Greek and Latin alphabets in sand or ashes laid out in an X shape in the nave.
It reminded me of the famous legend of the consecration of the original Westminster Abbey in the sixth or seventh century. Everything had been prepared for the ceremony the night before it was due to take place, and that night someone had a dream that St Peter himself was busy consecrating the church. In the morning, the monks got up and found the letters of the alphabets already marked out, and concluded that indeed St Peter had consecrated the church in the night.
I remember when seeing the pictures of the consecration of the new church in Wausau the same rather tiny cross being made as you can see in St Patrick's. The older custom, as I have seen in many photographs, was to remove all the seating, and make the X a vast one, from corner to corner of the nave. This meant, of course, that the laity usually did not get to see the ceremony, and perhaps this was why in these two instances a mini-X was made.
The (very rare) photograph shows the consecration of St George's Cathedral in Southwark in 1895 by Bishop John Butt. The Cathedral was, I think, by Pugin, but was firebombed in the second world war and now looks quite different. I scanned this picture from an old lantern slide.
Posted by Pastor in Monte at 12:34

My understanading is that the laity were actually excluded from the ceremony in former times. The church was not considered a 'safe' spiritual place until the consecration had taken place.

I had never heard the delightful story about St. Peter and Westminster Abbey before. Thank you for posting it.

This is indeed St George's, Southwark, but didn't it have a rood screen? If so, what has happened to it?