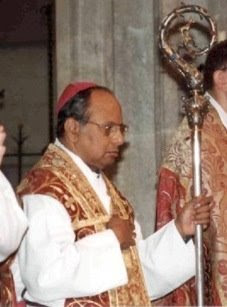 They used to call it kicking upstairs; Montini was sent to Milan as its archbishop, and this was read in Rome as a sort of disgrace. Bugnini's appointment to Teheran likewise. It's all very mediæval, really, this perception of the royal court as the real place to be. Better to empty the dustbins in the king's court than be a duke in the provinces. So now Archbishop Ranjith is to leave Rome for Sri Lanka, if the rumours are to be believed.
Some no doubt will see this as a curial coup. Ranjith was not universally popular, it has to be said, and it is rumoured that even in the Congregation for Divine Worship there was a deep split between those who welcome the Benedictine reforms, and those who resent them. Is this another manifestation of this divide? On the other hand, Ranjith is rumoured to have been a not unmixed blessing to Pope Benedict's admirers, having a sharp temper and a not-always-tactful tongue.
But surely we do not think in mediæval terms these days. Not all of us, anyway! The Indian sub-continent (of which, I suppose, Sri Lanka can be said to be a part) is a very mixed bag indeed. One the one hand, we have the stupendous example of the Missionaries of Charity. And then on the other hand we have considerable heterodoxy and heteropraxis. A visit by an Indian bishop to a priest friend of mine left my friend deeply shocked at the way his visitor, to whom, naturally, the facilities of the church were freely extended, improvised the liturgy of the Mass—even the Canon—and combined this with a personal arrogance towards his host and another priest from his own diocese. This is reportedly quite a widespread phenomenon. So, if Ranjith has been sent to the subcontinent, albeit on an island off the coast, perhaps he is just the person to bring things a little more into line with the rest of the Church before it goes very wonky indeed. We must also remember that Sri Lanka is where that chap Tissa Balasuriya came from; if the bishops there had done their job, it would perhaps never have been necessary for the then Cardinal Ratzinger to pull him into line, thus giving undue prominence to Balasuriya's opinions and giving him the status (in some peoples' eyes) of a martyr, persecuted by the Roman Inquisition.
So, if the rumour is true, Archbishop Ranjith, far from being exiled, may in fact be sent to exert some very necessary influence back home.
Posted by Pastor in Monte at 12:39

Thank you for some sense, Father, that would be exactly my take. As important as the liturgy is - and I think I am hardly suspect of undervaluing it -, it's not everything else in the Church didn't matter, and (probably soon Cardinal) archbishop of the capital of a nation of 20 million, as you say in the same cultural area as that nation of 1.1 billion which is already sending many of its priest to us tired and luke-warm Europeans, is hardly an unimportant position. Also, it has to be said that the Holy Father himself prefers to promote his reform in as peaceful a manner as possible, so while Archbishop Ranjith (whom I admire tremendously) was perfect as Secretary, maybe he just isn't what the Pope wants as prefect.

Many thanks for your calm and sane reading of the 'rumour'. I pray that your final suggestion as to Papal (?) strategy proves true. I have long worried and been praying about the rumoured split in the Vatican, some 'informers' even going so far as to suggest that Pope Benedict is 'beleaguered' and 'isolated' in his intitiatives towards 'the reform of the reform'.

As to the character of Cardinal Ranjith, in the film 'The Papacy of Reason', he comes over as very supportive of the Holy Father, and as having a very pleasant nature. Was he just playacting do you think? I really would appreciate your opinion.

I've never heard of 'The Papacy of Reason'! Thanks for your comments.

"The Papacy of Reason - Inside the Mind of Benedict XVI" is a documentary broadcast by EWTN. The DVD is available from them, I think.

Everyone should see it who wishes to explain Pope Benedict's Pontificate so far. It's 54 minutes of excellent apologia. Possibly you needn't bother to buy it if you have Real player. It's on my favourites and I almost know it by heart now! if you don't have Real player it's worth getting (and it's free) just for this. I'll come back with the link asap.

The film is in English but this version has French subtitles.

When you have real player, just key in 'The Papacy of Reason' or 'Le Pontificat de la Raison' and in so doing add it to your Real Player Library. Then you can call it up whenever you want to see it. You must click 'downlaod this video' to get full sound.

If any problems, please do get back to me.

Thanks; I've found it now on YouTube and will watch it soon.