Money in the Bank? 1 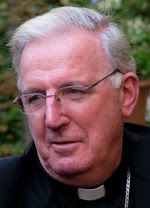 I was present last night in Worth Abbey at Cardinal Cormac Murphy-O'Connor's lecture, ARCIC: Money in the Bank or Dead in the Water? The Cardinal, his voice a little weaker than of yore, was in good form; as always, the talk, in classic Cormac mode, was enlivened by little stories—H.E. is a marvellous raconteur—and touched by the man's genuine warmth and charm which not even his enemies can deny. I have always been immensely fond of the Cardinal—he ordained me, and supported me at a time when not many others did.
Many had speculated that the talk would have had to have been entirely rewritten in light of the Holy Father's new initiative with regard to Anglo-Catholics, but, wisely, the Cardinal avoided this red herring (because that is what it would have been), and spoke simply about his own experience of the hopes of Christian Unity from the fifties to the nineties, of the view of Vatican II and the theological underpinning, and finally of what he called Spiritual Unity.
This is what he had to say about the Ordinariate:

But for the Catholic Church, the Petrine Ministry is a gift which serves to preserve both unity and the freedom of the Church from one-sided ties to certain nations, cultures or ethnic groups.   This is why Pope John Paul II seized the initiative and issued an invitation to a patient fraternal dialogue with other Christians on this very issue in his document, Ut Unum Sint.

It is in this context that we perhaps should understand the response of Pope Benedict XVI to a number of requests over the past few years to the Holy See from groups of Anglicans who wish to enter into full visible communion with the Roman Catholic Church and are willing to declare that they share a common Catholic faith and accept the Petrine ministry as willed by Christ for his Church.   As everybody knows, there are certain groups of Anglicans who for years have nurtured hopes of new ways of embracing unity with the Catholic Church.   The generous response of the Holy See has been to establish a canonical structure for what is called ‘Personal Ordinariates’ which will allow former Anglicans to enter full communion with the Catholic Church while preserving elements of distinctive Anglican spiritual patrimony.   There is much that has been written and spoken about this matter over the past week but I would just want to emphasise that this response of Pope Benedict is no reflection or comment on the Anglican Communion as a whole or of our ongoing ecumenical relationship with them.   Indeed, I think it true to say that this was one of the reasons why this particular provision for Anglicans who wished to enter into full communion in 1993-94 was not implemented.  At that time, Cardinal Hume, Bishop Alan Clark of East Anglia, the then Auxiliary Bishop of Westminster – now Archbishop Vincent Nichols – and myself were responsible for the on-going discussions with the leadership of a movement called, Forward in Faith, as also with the then Cardinal Ratzinger and his advisers in Rome.  It is true to say that some special provision for the Anglicans who wished to come into full communion with the Church, a provision such as the Personal Ordinariates, might have been very helpful at that time.  But after much discussion, it was finally decided that it would not be appropriate to take this initiative.  The reasons for this were two-fold.   The first is that in 1993-94 the we bishops were dealing solely with clergy of the Church of England, and any such response as is now given by the Holy See would naturally have had to be offered to the whole of the Provinces of the Anglican Communion.   It did not seem within our remit to engage in such a response.   The other reason, however, was even more important.   If the Holy See had offered such Personal Ordinariates then, and in particular here in England, it might well have been seen as an un-ecumenical approach by the Holy See, as if wanting to put out the net as far as one could.  Both Pope John Paul and the then Cardinal Ratzinger would have been against such a move as, indeed, were the four of us.  Matters have moved on since then and the repeated requests by many Anglicans, not only from England but from other Provinces of the Anglican Communion, have necessitated a new approach, which is why I think that the Personal Ordinariates offered by the Holy Father can be seen not in any way un-ecumenical but rather as a generous response to people who have been knocking at the door for a long time.

Like me, His Eminence doesn't (in my opinion) think well on his feet, and his response to the questions afterwards was less satisfactory. A young monk (presumably from Worth) pulled him up on a theological imprecision and in trying to explain, the Cardinal simply dug himself in deeper. Likewise, the first questioner, a non-Stipendiary Anglican priest, had expressed disquiet regarding the Church's questioning of the validity of his orders. That, too, could have been handled better—this question should have been anticipated. His Eminence did better when tacked on Pope Benedict's recent Ordinariate proposal. He refused to do anything but support the Holy Father, and resolutely rebutted the suggestion that this was intended to have a negative effect on Ecumenism. One questioner drew scattered applause from the audience when he opined that the Catholic Church should be learning from the Anglican on the subject of married clergy and women clergy. Again, Cormac supported the Church's line, saying that married clergy were a possibility; they were already in the Church, but that celibacy was going to remain the norm, and that the possibility of women priests was simply not to be thought of.
As for money in the bank, I have some thoughts of my own which I will deal with in the next post.
Posted by Pastor in Monte at 09:07