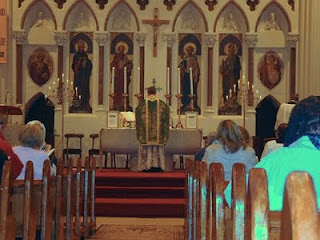 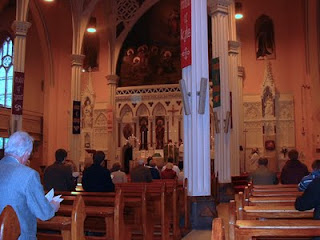 I was delighted to read on the NLM blog an account of an extraordinary form Mass in the elegant 'Gothick' Cathedral at Ennis in County Clare. It is a church and town that I know well: in fact I celebrated the Requiem Mass for my beloved aunt Agnes there some eleven or twelve years ago. I remember going to Mass there when I was a boy; the liturgy was the English form of the old Mass ('I will go to the altar of God/ the God of my gladness and joy'), and I remember that all the women sat on one side of the church and all the men on the other. A few years after this, the sanctuary was very unsympathetically reordered.
In the past, the Cathedral had a fine liturgical and musical tradition; there was a Dutch organist called de Regg (sp?) who played a mighty three-manual instrument, far too big for the Cathedral which is really only the size of a largish parish church. A large pile of his music (including some early Clementi editions, which in due course I passed on to the organist at the London Oratory) came my way eventually, via my aunt Agnes. My grandmother sang in the choir around the turn of the nineteenth and twentieth centuries; she told a story that at some service or other they were singing Fr Faber's hymn 'O mother, I could weep for mirth' (well, quite!) with its repeated refrain 'Immaculate! Immaculate!' A well-known local drunk called Jim Mack came staggering into the Cathedral and thought they were singing 'Jim Mack, you're late!', whereupon he let loose with a torrent of obscenity.
Something you might not have noticed is a reference to a choir from Corofin. I have meant to blog about this choir for some time, for it is a real treasure. As with most of Ireland, the diocese of Killaloe has been rather reluctant, to say the least, to pursue any sort of traditional liturgy until Michael Leahy set up this little group of enthusiasts in a remote part of County Clare near the Burren. It is named Schola Petra Fertile, a reference to the 13th century abbey on the Burren's edge, founded from Furness Abbey in Cumbria, called (then) the abbey of Sancta Maria de Petra Fertilis  (or, variously, Fertili, or Fertile [can that be right?]), or Our Lady by the Fertile Rock. This is a reference to the karst landscape of the Burren, where extraordinary fertile soil lies improbably in the cracks between a sort of lunar landscape of limestone blocks. Nowadays the ruins are known as Corcomroe Abbey.
Back to the schola. They sing mainly in the parish of Corofin, Kilnaboy (my family home) and Rath, circulating from church to church from Sunday to Sunday, and occasionally elsewhere. Their repertoire is exclusively plainchant, and on the whole, the best known items from the Liber (by which I mean Missa de Angelis, a few motets such as Attende Domine, Adoro te devote &c). Solesmes it ain't, but, in the soil in which it is planted, it, like the abbey, and like the flora of the Burren, flourishes most surprisingly. They deserve to be better known and imitated. They have won a few prizes, (perhaps partly due to the sheer dearth of competition) and have produced a CD: Sanctus: Canto Gregoriano, which has this to say inside:

The Corofin Gregorian Chant Group, the 'Schola Petra Fertile', was set up in response to Pope Benedict's call for increased use of Gregorian Chant in Church liturgy.
The Schola won first place in the plainchant competition at the 2007 Limerick Festival of Church Music.
Formed in 2006, the group is directed by Mr Michael Leahy. Initial training was undertaken by Fr Liam Enright (Diocese of Limerick) and more recently by Fr Michael O'Brien, who is also the Schola's accompanist.
Gregorian Chant is a wonderful legacy of the Church and it is envisaged that this recording will be used as a training tool by parish choirs in the restoration of plainchant in the Sacred Liturgy.

Indeed. Amen. County Clare is famous in Ireland for its (mostly Irish Traditional) music, so perhaps it is not entirely surprising that this enterprise should have been undertaken here.
And I am biased, I suppose, because my uncle sings in the group!
Posted by Pastor in Monte at 08:51

I don't know about liturgy, Fr Sean but if you can lift a leg for a jig or reel then Corofin is the place to head and long may it continue !

Somewhere someone spawned a whole race of architects/planners who didn't give enough room to swing a cat down that aisle. Ditto the pillars in the side aisles!

Glad to read tht today Father as it is my Grandmother's anniversary today and she was a native of Co. Clare.

The priest who celebrated is a great friend of mine, and a scholar and gentleman... you would like him very much, Father.