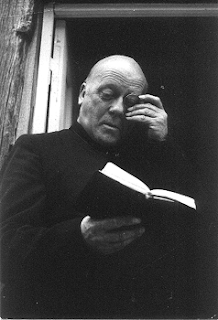 Fr Tim the Continuous Hermenaut has blogged about eyeglasses (also known as monocles). It reminded me of a visit I made with a friend to a very remarkable priest in Normandy called Fr Quentin (or perhaps Quintin) Montgomery-Wright.
A convert clergyman, who had served as an Anglican at St Augustine's Kilburn (I think), his home being Mevagissey in Cornwall, on his conversion he had joined the diocese of Evreux in Normandy, and had been made, in the 1950s the Curé of the village of Le Chamblac and a couple of surrounding clochers.
Initially, he had been very enthused by the Liturgical Movement. Well before it was legal, he had turned his altar around and (like a few daring others) was celebrating Mass in French. He told me that his fellow priests in the deanery had accused him of being 'scarcely Catholic'. About 1967, he had found the general disintegration of things uncongenial, and, being told that nobody actually obliged him to celebrate in French, had returned to Latin, facing East on his forward-altar, and never again changed his mind.
He never entirely allied himself with Archbishop Lefevbre, though he was willing enough to have confirmations administered by the Archbishop (and also by his consecratees after the events of 1988). The famous heterodox bishop of Evreux, Jacques Gaillot, had been kind to Montgomery-Wright (no doubt thinking that if his own strange views ought to be tolerated, then so should those of others) and had not disturbed him in his parish, but a change in diocesan boundaries had landed him in another diocese where things were not so peaceable. Nonetheless he was left (more or less) alone until he tragically died in a car crash (he was a truly frightening driver, as I well remember).
His kindness has left an impression on my memory. Not only did he find room for me and my friend for a week in his ramshackle presbytery, but he also found more or less permanent room for a Downs-Syndrome man called Christian. He also sent me away with a bottle of glorious rough Calvados from some local farmer which has set up a taste for the stuff in me which has never since been satisfied by the stuff peddled in the UK, (usually laced with disgusting caramel…don't start me!)
(A ring at the door interrupted my flow: I have just had a most interesting conversation with a woman who lived in Holland during and after the Second World War).
Finally, while I was with Fr M-W, the thought struck me that here in Le Chamblac was a priest who had celebrated the traditional rites pretty continuously from the 1950s until the 1990s. Here, if anywhere, was the 'control' for the liturgical and pastoral experiment of those years. What might the Church have been like had the changes not happened? So I asked him about religious practice in his parish. Had as many ceased to come to Mass during the last thirty or forty years as had done so elsewhere? His answer was that two families had ceased to attend in Le Chamblac, but that they went instead to the French Mass in the next parish. Other than that, all families practised as they had before.
Maybe he was simply a loving and good pastor (I thought that, in any event). But I think that the figures speak for themselves.
[Rather shamefacedly] May I credit Fr Anthony Chadwick as being the source of this photo. I had assumed that, being on the internet, it was a generally available pic, and have found that this is not so from his charitable observation on the Anglo Catholic blog (ref. left). I thank him warmly for his permission to post.
Some more wonderful photographs here.
Posted by Pastor in Monte at 16:09

Wasn't his parish shown in a BBC documentary some 10 years or so back?

That was an intriguing story. I wonder how an English Priest came to be in charge of a village parish in Normandy in the 1950s? Was there already a shortage of home-grown vocations in France at that time?

Interesting to learn that his Bishop 'did not disturb' him. I was privileged to be introduced to Mgr Gaillot during a visit to Paris in October. He continues to work tirelessly for the homeless, for the 'sans papiers' and for Peace. On December 26th he will be taking part in an International March for Peace in Gaza to try and bring the plight of the Palestinians to the attention of the world.

Yes Mgr Gaillot did hold some unorthodox views and for that he paid the price having to leave his see where he had been a well respected bishop. However his departure has given him the opportunity of devoting himself to those least able to help themselves and in this way he is indeed following the Gospel.

I am not ashamed to say that I have a great respect for Mgr Gaillot in spite of his 'strange views.'

This English priest was not alone in continuing to offer the Traditional Latin Mass in France in the 1960's and 1970's.

The origins of the seminary at Gricigliano are instructive. This, I discovered yeaterday, was an early foundation of N-D de Fontgombault which failed due to lack of vocations and was given by Fontgombault to Opus Sacerdotale a French Association of Priests founded in 1964 see: http://cat.inist.fr/?aModele=afficheN&cpsidt=18915101

"But closely linked with the French Benedictine revival is Opus Sacerdotale, a large association of over five hundred diocesan priests, mostly country curés who in 1963 began to defend Catholic teachings, values and practices already under attack in France. Today the national episcopate still refuses to grant canonical recognition to this priestly confraternity founded by the late Canon Etienne Catta, Dean of the Angers Faculty of Arts. The most obvious reason for its unpopularity with the Liberal Establishment is the fidelity of many Opus members to the traditional Mass.

Dream realised
But what is truly remarkable about these priests is their ability to stand their ground. Typical is the case of Father Pierre Lourdelet, the present Director of the association and author of a successful new catechism. Father Lourdelet is pastor of three parishes near Paris, and has been celebrating the old Mass without let or hindrance since 1960. "How did you get away with it?" I asked him. I simply explained to my Bishop that until the bull Quo Primum was abrogated I had every right to use the Missal it promulgated, a fact he had to concede."

In 1988 an old dream of Canon Catta's was realised when Opus Sacerdotale opened a house of priestly formation at Moissac near Toulouse. Liturgically the seminary was to be exclusively traditional-rite. But when the opposition from the French hierarchy forced professors and students out of the country in 1990, the Benedictines of Fontgombault came to the rescue with the offer of the small monastery of Gricigliano near Florence in Italy. On 1st September the Ecclesia Dei Commission officially approved the venture as an institute of apostolic life under the name of the Institute of Christ the King Sovereign Priest, and it received strong support from Cardinals Mayer, Palazzini and Stickler. The two superiors, Mgr. Gilles Wach and Fr. Philippe Mora chose as patrons for the twenty-seven mainly French seminarians Sts. Benedict, Thomas Aquinas and Francis de Sales, and declared in their first publicity brochure that "Our House of Formation is intended to prepare future priests in a Roman spirit, priests destined for parish ministries, teaching, spiritual direction and the preaching of retreats, in order to promote all the human and superhuman values of Christian civilisation in an optic of natural harmony between culture and faith."

The story of the maintenace of the Traditional Latin Mass in french still remains to be told but once again one can see how providence used Fontgombault.

He was, I believe, curate assistant of Saint Stephen's Gloucester Road, South Kensington

Yes Anonymous, the BBC broadcast two programmes: Fr Quintin, made in 1987, and Fr Quintin's Normandy, made in 1990. I think the last showing must have been well over ten years ago.

Wonderful television, wonderful priest and it would be a near miracle if the BBC were to screen it again!

I had a brief correspondence with Fr. Quintin but alas never met him.

I would be fascinated to learn from those who did visit Chamblac what the servers wore on certain days.

I have seen photographs of acolytes in tunicles on 'high days' - an excellent revival of medieval praxis - but other servers wearing what seems to be a cross between a broad stole and giant maniple worn in the style of a deaconal stole. Does anyone know what this was?

Under entry for December 14th..

I found this interesting:

He (Father Montgomery) vested on the Lady chapel altar (the church's south transcept). The Judica me psalm was said at the Lady altar and in procession. He likewise said the Prologue of St John on the way from the high altar back to the Lady chapel. At the time, I though he was just being odd, but this was the medieval and pre-Tridentine way of celebrating.

There should be no reason why this couldn't be done everywhere?

It would be very kind of you if you could let your readers know about the December issue of CHRISTVS REGNAT, a journal of Catholic heritage from Ireland:

Subscribers would be most welcome! We'd also be delighted if you linked to/followed/blogrolled our blog:

I had the opportunity in 1980 to live with Fr. Quintin and his friend, Christian, for 3 months. During that time, Fr. Quintin was supporting a group in Paris that wanted the French Monarchy back. Which had something to do with Bishop Le Fevre'. I did not have a knowledge of French. So, therefore, don't you really know what was going on? But, I must say it was a most enjoyable time. And, I do, feel lucky to have met Fr. Q.

You may contact me at FB. gerard_suziedelis-suzadail
This is about Father Quintin Montgomery Wright.

Thank you for this lovely article on Fr. Quinton.

I am a Filipino woman married to an English Catholic from Sussex whose family was close to Fr. Quinton.

In 1988 my husband took me to Normandy to visit Fr. Quinton and we stayed in his rectory for a week. It was a most memorable experience. The first thing you'd see as you woke up in the morning was the cemetery.

I became Fr. Quinton's housekeeper and cook for a week and my husband was his handyman. I communicated by sign language with Christian, ironed a few vestments, cleaned the church, lit his enormous fireplace, and learned how to drive the cows from entering the church grounds.

He heard our confessions before the Sunday Mass and I was thrilled to be part of a congregation singing Missa de Angelis which I learned in high school. Instead of coffee, his parishioners served scotch and brandy at the fellowship after Mass.

I asked Fr. Quinton about the Lefevrists and he outright told me they were schismatics.

Fr. Quinton drove my husband and me to attend vespers at Solesmes. He also took us to St. Therese's birthplace at Alencon and the Carmel at Lisieux and introduced us to a family next door to St. Therese's house at Les Buissonets (sorry, can't spell it.)

How true - Fr. Quinton was a heck of a driver. I held on to the brown scapular just to make sure I had it around my neck. Even his poodle dog was scared stiff riding in his car.

Fr. Quinton was a lovely man, and a saint. I learned so much from him about St. Therese and St. John Vianney. He showed me where he would be buried when he died. I wish I could visit Le Chamblac again to pray at his grave.