The Pope in the Press 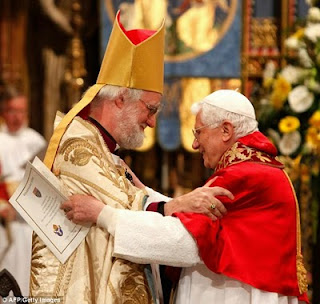 Looking around the religious press, it is interesting to see the coverage of the Papal visit. Naturally, the Catholic Press are very cock-a-hoop about the whole thing; even The Tablet seems to have developed an enthusiasm for Pope Benedict which I have discerned growing for some time now.
The Methodist Recorder (here's their rather home-made website) is rather chilly, recording on its front page

Pope Benedict XVI's visit to Britain has been hailed a "success" by the Methodist Church in Britain.

Every positive word about the visit is put in inverted commas, as if to suggest that the writer thinks otherwise, though he does note that the General Secretary of the Methodist Conference seemed to have enjoyed herself. There is a sad comment from someone that Methodism itself could not now manage to raise the profile of Christianity in Britain, and that it was a good thing that at least someone managed to pull it off. 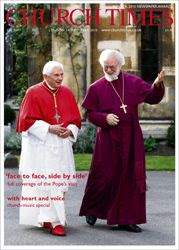 The Church Times (aka Jezebel's Trumpet) is quite surprisingly (and refreshingly) positive. Last week it had been quite sniffy (to my eyes) about the whole thing, even running a poll among Anglicans as to whether the Catholic Church should continue to maintain a celibate clergy. As if it's any of th………… but I forbear. This week, several pages are devoted to the visit and in a very positive way, which is very nice to see; the front page features the Holy Father and the Archbishop of C striding down a path (presumably in Lambeth Palace), the ABC gesticulating oddly. It's a nice pic, but not as nice as the one of the two of them embracing, which the Holy Father spoilt by clutching his service menu. I've seen it several times in print, but can't find a copy on line to post here. (Now at the top of the page: thanks to Fr William & KMcN). 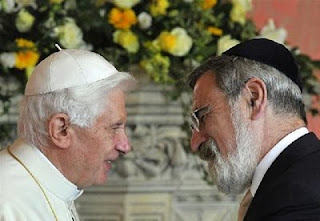 I haven't seen a paper copy of the Jewish Chronicle, but the online edition (closed now for Succot) doesn't seem very interested in the visit (and why should it be?). There is another of those nice pictures, though, of the Holy Father with the fascinating Chief Rabbi Jonathan Sacks, a man who seems constitutionally incapable of saying anything dull. O si sic omnes!
Posted by Pastor in Monte at 12:22

Having regard to the famous Notice, one vaguely wonders which of the Ground-Floor Retiring-Rooms was made available to His Holiness . . . the Inner Sanctum or 'Holy of Holies', should one think ? :-)

I think the picture you're missing is probably this one.

re 'The ABC gesticulating oddly.' I think he is showing the Holy Father how to do the Lambeth Walk!