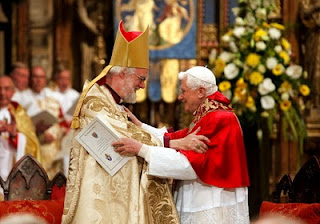 A friend has pointed out to me what the two are wearing: Rowan Williams is wearing the ring that Pope Paul VI gave to Archbishop Michael Ramsay, which he likes to produce on those papal occasion. Pope Benedict, on the other hand, is wearing a stole that belonged to Pope Leo XIII. That, too, cannot be an accident.
Leo, was, of course, the pope of Apostolicæ Curæ, but I don't really see the Holy Father being that tactless. And yet what other explanation might there be?
On another topic, I was very pleased to notice that the altar is no longer (or at least was not on this occasion) piled high with the abbey plate: on certain state occasions it used to look like a victorian sideboard, with dishes, jugs, and probably a box or two of Namaqua wine and a bowl of fruit. I also noticed that at the very beginning, the choir sang a very peculiar responsory with lots of yelping noises instead of music. The Holy Father was quite clearly trying not to giggle.
Posted by Pastor in Monte at 18:49

I think he was saying something about the hermeneutic of continuity, "I am Peter who embraces you and wants to be your friend but I am also Peter who issued Ap. Cur. Come to terms with it!"

Westminster Abbey on the "watch again" section of

Leo XIII made Newman a cardinal?

I would agree with Patricius' explanation. Pope Benedict is nothing if not courteous and discreet. I could not see him doing this in an 'in your face' manner.

Patricius and GOR,
Yes, I suspect you may well be right. It's a good suggestion.

Perhaps he was immensely amused at the fact he could use the Newman connection to wear the Apostolicae Curae stole :)

I suppose one would have to check what stole the HF normally wears to see if he had to mean anything very strongly by wearing it.

But the amusement remains :)

Does Mgr Marini put out what the Holy Father wears at the altar and on other occasions? We have seen many old papal stoles brought out for use in recent years, and delightful they are. But I am sure it was the link between Pope Leo XIII and Newman that occasioned this choice, rather than Apostolicae Curae. But, if not, a subtle mind was at work.

By the way, why did the Archbishop of Canterbury and the Dean of Westminster wear stoles on this occasion? It was supposed to be Evensong (even though there was hardly any resemblance to the Prayer Book) and stoles are not worn for non-sacramental rites by Rome or Canterbury. Old-fashioned High Church books on what, and what not, to wear got hot under the collar when criticizing stoles worn at the Offices. However, I dare say that those conventions are now long forgotten, thought they still apply.