Zapatero to meet the Pope 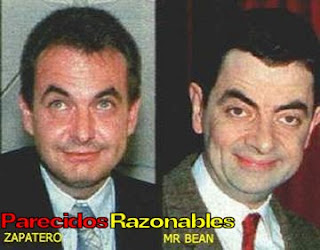 Perhaps the most openly anti-Church premier that Spain has seen since the Civil War, José Luis Rodríguez Zapatero (right, not to be confused with Mr Bean, left)  is, after all, to meet the Holy Father when he visits Spain next month to consecrate Gaudi's famous Sagrada Familia church (or the bits of it that are finished, anyway), and also to visit Santiago di Compostella, the shrine of St James that has a hugely important symbolic status for the Spanish self-understanding of nationhood.

People had been wondering whether there would be a meeting, since a non-appearance might be construed to be a snub. In the opinion of the government, it is quite sufficient that the Holy Father be welcomed by the president of Catalunya, José Montilla and his assistant.

By not turning up, of course, Zapatero could claim to be sensitive to Catalunyas devolutionary aspirations. But it looks bad, doesn't it? And though Barcelona is in Catalunya, Compostella is not. So now Zapatero is to meet the Holy Father after all, for the first time.

'sólo de "unos momentos"—and only for a few moments.

I hope the Holy Father gives him a rosary.
Posted by Pastor in Monte at 19:37

Since zapatero mean shoemaker, we can all shout 'cobblers to Mr Bean'

I'd like to see Pope Benedict and Zapatero repeating the scene that played out when Pope John Paul II met Fr Cardenal, revolutionary minister in Nicaragua (watch from 1:35 onward).

Zapetero met the Pope at Valencia in 2006 and again at a private audience at the Vatican earlier this year.

What is unusual about the proposed meeting in Barcelona is that Zapetero is supposed to have requested the audience himself.