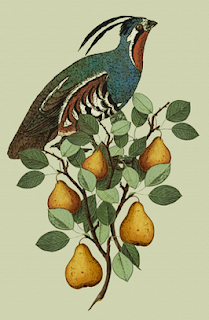 I had an enquiry this morning from one of my ecumenical opposite numbers about the song A Partridge in a Pear Tree. She had heard that this was a sort of catechetical song of the Catholic Underground during penal times. This is an explanation that I have heard, too, but I have to say that I don't find it remotely convincing. The only thing that it might teach is a child to count backwards from ten; what one might want a child to learn is not that there are seven sacraments so much as what those sacraments are—children would learn that there are seven anyway.
Several of these sorts of crypto-Catholic practices were described in Fr Mark Elvins' book Old Catholic England, and I hesitate to say that I think that lots of these connections are simply fantasy, romantic invention, but, having hesitated [……], there, I'm afraid that I do think that they are just that.
I'd be interested to hear if anyone knows any more about it: I'd be very pleased if any sort of real connection were made between these things and the recusant period.
Posted by Pastor in Monte at 10:52

I understand that several of our Nursery Rhymes are believed to have either pro or anti Catholic connections.

The one which seems very convincing as having hidden meaning is 'Mary Mary quite contrary..... with silver bells and cockle shells' etc the silver bells referring to the sanctuary bells rung at the Elevations and the cockle shells being the emblem of St James of Compostella.

According to some historians 'Ring a ring a roses' dates from the Black Death - the ring of roses being the rash going round the body ending with sneezing then death - hence 'atishoo atishoo we all fall down.'

I had not heard of the book 'Old Catholic England' but it does sound an interesting read. Thank you for the information.

Yes Father, I had heard that theory also, but never found it very convincing. Just as people love to see ‘images’ in trees, pizzas and odd-shaped cookies, I think it is a stretch.

Might as well try and maintain that “Old MacDonald Had a Farm” somehow refers to Adam naming all the animals in Genesis…!

"Might as well try and maintain that “Old MacDonald Had a Farm” somehow refers to Adam naming all the animals in Genesis…!"

You mean it didn't? Oh, the disappointment!

Seriously - most of these derivations range from unprovable to nonsense. The Black Death attribution of 'Ring a ring a roses' is a good example: there's no evidence of its existence before the late 18th century, and 'posy' is a word which didn't appear till the 16th century. http://en.wikipedia.org/wiki/Ring_a_Ring_o'_Roses is quite good on this.