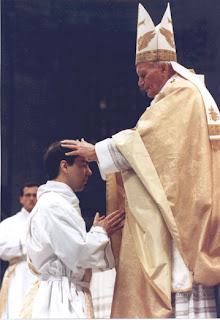 The crossword in this week's Tablet gives a clue for 7 across: 'Grade of holy orders, now suspended in the Latin Church (6)'.
I nearly whooped with delight: no, I've not gone nuts. It was the word 'suspended'. Usually people use the word 'abolished' and I have to patiently explain that the minor orders have not been abolished, but are simply no longer given except per saltem at the reception of the diaconate. The minor orders cannot be abolished, because they pertain to the very Sacrament of Holy Orders itself. The Council of Trent, Session 23, solemnly defines—in a canon with an anathema—that the Sacrament of Orders consists of both major and minor orders. If anyone says not, anathema sit.

CANON II.--If any one saith, that, besides the priesthood, there are not in the Catholic Church other orders, both greater and minor, by which, as by certain steps, advance is made unto the priesthood; let him be anathema.

It doesn't define the list in the canon, however; this is presumably because the East does it a little differently. For instance, if my memory serves me well, the subdiaconate is there considered a minor order. However, in the preamble to the list of canons, chapter 2, lists (without an anathema, however) that the grades of order are sevenfold, as follows: porter, lector, exorcist, acolyte, subdeacon, deacon and priest.

Chapter II On the Seven Orders.
And whereas the ministry of so holy a priesthood is a divine thing; to the end that it might be exercised in a more worthy manner, and with greater veneration, it was suitable that, in the most well-ordered settlement of the church, there should be several and diverse orders of ministers, to minister to the priesthood, by virtue of their office; orders so distributed as that those already marked with the clerical tonsure should ascend through the lesser to the greater orders. For the sacred Scriptures make open mention not only of priests, but also of deacons; and teach, in words the most weighty, what things are especially to be attended to in the Ordination thereof; and, from the very beginning of the church, the names of the following orders, and the ministrations proper to each one of them, are known to have been in use; to wit those of subdeacon, acolyte, exorcist, lector, and door-keeper; though these were not of equal rank: for the subdeaconship is classed amongst the greater orders by the Fathers and sacred Councils, wherein also we very often read of the other inferior orders.

Notice anything? Yes, no mention of a bishop. Trent, then, did not consider Episcopate as a separate grade of order to priesthood. Rather, one may conclude, a priest is a bishop inhibited from exercising certain functions. But a priest has these powers latently; the bishop exercises the fulness of the priesthood.
If you view episcopacy as a separate grade of order, with separate powers, then this gets you into some problems. If a bishop is a successor of the apostles, but a priest is not, then how is it that a priest can exercise the unquestionably apostolic power of absolution? He needs the bishop's authority to do so, but this 'unlocks' a latent power already within him. A letter from a bishop cannot confer a specifically apostolic power on a man otherwise incapable. Likewise, at an ordination to the priesthood, each priest present, wearing the stole, lays hands on the head of the ordinand after a bishop has done so (and in the traditional rite of ordination, continued to extend his hand in consecration while the prayer of ordination was recited). And similarly, the priests co-consecrate the Chrism with the bishop.
To take this traditional view of the Sacrament of Holy Orders also gets one around the fact that the earlier books of the New Testament seem to recognize only Episcopate and Diaconate; the Presbyterate appearing only by the time of the Pastoral Epistles.
When I was in the seminary, quite a different approach to the Sacrament was taken. We were taught (by someone now a member of the hierarchy of England and Wales) that, following Vatican II, the Sacrament of Orders is to be considered as being threefold, consisting of Diaconate, Presbyterate and Episcopate. One passes from one order to the other; on ordination to the Presbyterate, the ordinatus ceases to be a deacon, and thus may never perform ('dress up and play' was the phrase used) as a deacon at Mass. I have been told (though have never checked it out) that this approach derives from the work of Karl Rahner; it appealed to the fathers of Vatican II, I suppose, because it appears at first sight to be more scriptural, since the only orders mentioned in Holy Writ, as above, are Diaconate, Presbyterate and Episcopate. For this reason, the Reformation communions that maintained a hierarchy of Holy Orders (such as the Church of England) only bestowed these three orders (according to their own understanding). So the adoption of a threefold system of Orders by the Catholic Church has the added advantage, to many, of being ecumenical too, in the West, while in the East, the Eastern Churches still maintain their own lists of major and minor orders.
This is a bit of a mess, really, and needs sorting out authoritatively.
But I'm delighted that the Tablet agrees with me. The minor orders have been suspended, but cannot be abolished, unless one wishes to be anathema.

The priest being ordained in the photograph is our very own Fr Z. I hope he doesn't mind me using his pic; it was the first ordination pic that Google found, and it's a nice one.
Posted by Pastor in Monte at 11:14

Father, it is said that many of these problems of differentiating episcopacy and priesthood boil down to the idea that jurisdiction and orders are the same. This also leads on to interesting questions on the papacy. When we were studying canon law with Fr Ghirlanda at the Gregorian he referred to the approach of Fr Rahner to this question: he said that the papacy was a fourth grade of Holy Orders but one conferred by election rather than by laying-on of hands!

Am I right, Fr. Sean, in thinking that even the London Oratory refer to 1st and 2nd assistants at the Solemn Mass rather than Deacon and sub-Deacon? Birmingham Ortaory however, still refer to Deacon and Sub-Deacon in their celebration of the Novus Ordo High Mass. Confusing, isn't it?

By the way, as a former occasional reporter for R4's 'Sunday' programme, I agree that it isn't a shadow of its former self. Gone are the really good packages which examined religious issues from all sides.

Am an atheist, but could be persuaded to give robust response to Rahnerian innovations in sacramental theology (8,3)

If the Bishop wasn't just a priest with fullness of function, how could a priest confirm a newly baptised convert?

Father,
I was told, simply, "Trent was wrong" by the the same theologian, I think.

There was a clear understanding of a progression - a moving towards the ultimate goal with increasing responsibilities along the way. I wish it would be re-instated.

As to the difference between a priest and a bishop, this was explained as the bishop having the “fullness of the priesthood” - given his ability to ordain priests and consecrate other bishops. Back then it was also unheard of that a priest would confer Confirmation. This was further emphasized in diocesan life where the Ordinary was the priest of the diocese and all other priests were his helpers – basically acting ”in loco episcopi”.

It is also of course the case that various priests have historically had the power to ordain to various grades. Boniface VIII allowed the Abbot of London's Augustinian Monastery to ordain his subjects as priests (albeit this was soon revoked wanted to reserve this power to himself). Martin V allowed some abbots in Saxony to ordain and Innocnet VIII allowed certain cistercian abbots to ordain, something contained in their rituals right up the the 20the century (although the practice, I believe, had fallen out of use a long time previously)

Could this mean that a priest has the power to ordain others to the priesthood, or even the episcopate?

Maybe the anti-pope Pius XIII isn't such a nutcase after all?

Well, I suppose it might, in theory, if there were no bishops left anywhere in the world. But I'm not a theologian.

Per saltum, not per saltem.