Heralds of the Gospel 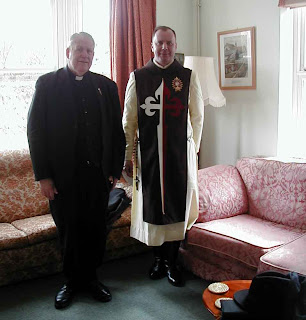 We've been pleased to have an afternoon of recollection this week, praying especially for the cause of Life—thinking about the Human Fertilization and Embryology Bill at present before parliament. This was led by Fr Jules and Br Anton of the Heralds of the Gospel, a flourishing new religious family. Fr Jules characterized their work in one pithy sentence 'our work is the New Evangelization'. That, I have to say, is music to my ears. Fr Jules, an Argentinian, is fluent in nearly all the major Western European languages, and sees an important part of his work as reconciling to the Church the many immigrants who have lost their way. They are very willing to come to parishes to conduct missions, retreats, talks &c, with a particular emphasis on devotion to our Lady—St Louis-Marie Grignon de Montfort is a particular favourite of theirs. Only recently have they been properly set up with their own priests; Fr Jules was one of the first to be ordained, about three years ago. The others, men, women, and even married people are the main driving force of the movement, wearing this rather striking habit that you can see Brother Anton wearing in the pic.
Posted by Pastor in Monte at 11:57

Fascinating, Father! I took the liberty of quoting you on the NLM: http://thenewliturgicalmovement.blogspot.com/2008/03/background-of-changes-in-papal.html

Interesting, but what a weird looking pair!

I have put up a post on the Heralds which I though you might find interesting: http://thenewliturgicalmovement.blogspot.com/2008/03/heralds-of-gospel-triduum.html

Response to micky finn: It was probably not intended but why the need for a derogatory comment? I have met these people and I can assure you that they are in no way 'weird'- but civilised, educated and kind.