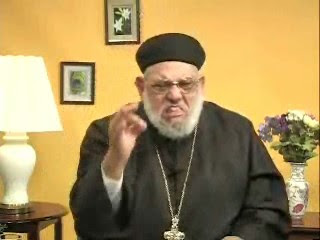 When I was a curate in Hove, many years ago, there was beginning a large influx of Egyptian and, I think, Sudanese, Coptic Christians. They had achieved some sort of critical mass which entitled them to be provided with a priest. I remember him well; Father Zakaria Botros was his name. He had been obliged to leave Egypt because he had been somewhat outspoken about the way the Coptic community were treated.
At that time, All Saints Anglican parish church had afforded the Copts hospitality, and they offered Mass there regularly. After some time, they managed to acquire a redundant Anglican church, which became a church of their own. Fr Zakaria would attend clergy fraternal meetings, when we would share lunch. I cannot remember a single instance of him actually eating with us—it was always a fast day, he told us. And yet, every day cannot have been a fast day—his proportions were, let us say, generous. He would sit at the foot of the table watching us eat, and participating genially in the conversation. I remember the Vicar was particularly deferential to him, and he was certainly an imposing figure in his voluminous black cassock and hat, with a large pectoral cross that looked as if it were made out of black and white liquorice. I think the Vicar saw Fr Zakaria as a sort of natural ally—a 'catholic' (according to the Anglo-Catholic understanding of the term) who was not a 'Roman'. The Vicar got a shock one day, because when making some point or other to Zakaria about Roman hegemony and Anglican independence, Zakaria shook his finger under his host's nose and said 'this is very bad! You should return to your natural patriarch'. And eventually, he did. Fr Zakaria would often speak warmly of the agreement thrashed out between Rome and Alexandria concerning our Lord's nature. They basically believe what we do—they hotly deny that they are Nestorians [I should of course have said Monophysites here-see comments]—but are highly reluctant to accept the literal words of Chalcedon. Which is one hell of a problem to overcome.
This is a very long introduction to what I really would like to draw your attention to. Fr Zakaria Botros, or perhaps another man of the same name (though the unflattering picture above, from an Islamic site, certainly looks like an older version of him) has, from his current home in the US, been making substantial waves in the Arabic world. He has taken his courage in his hands and begun to fight Islam back intellectually and publicly. For the first time a reasoned defence of Christianity is being made available to the general public in Islamic countries. There are plenty of good critiques of Islam written in English and other languages, but very little in Arabic. Fr Zakaria, very well read in the Q'ran and the Hadiths regularly goes on public television where he poses hard questions to the imams who visibly struggle to provide answers. The Arabic newspaper al-Insan al-Jadid calls him Public Enemy #1. I understand that his campaign of simply informing people of the odder and more rebarbative aspects of Islam has led to quite a number of converts. You can read all about it here—the article is quite long, and not very clearly laid out, but very much worth reading.
At any rate, we must keep Fr Zakaria and his fellow-Copts very much in our prayers.

Fr Zakaria has his own website in English here.
And you can read the transcript of one of Fr Zakaria's forthright broadcasts here.
Posted by Pastor in Monte at 09:41

Would you mind letting people know about this excellent new blog that promotes vocations to Traditional Societies in Union with Pope Benedict XVI: http://tradvocations.blogspot.com

Will be in Egypt in 2 weeks so will pray for them..

I remember reading recently that the Copts have more fast-days during the year than any other form of Christianity - over 210 days per annum.

Also, I suspect he denied being a Monophysite rather than a Nestorian. Nestorianism was mainly confined to the middle east, whilst monophysitisim thrived in the Patriarchate of Alexandria.

The Copts are Monophysites not Nestorians. The Good Father might also wish to address the Phyletistic attitude the Coptic Church has to conversions / membership for others than ethnic Copts. Encouraging an Anglican to return to his (Papal) patriarch may say more for Coptic positions than meets the eye. The plight of the Copts, especially in rural Egypt, is truly lamentable and deserves all of our prayers and support.

The Copts have never been called Nestorians, but they are often called Monophysites, and that is the label they have been fighting all this time.

As for fasting, the Copts have 210 days of fasting throughout the year, more than any other Church, so Fr. Zakaria's claim that it's always a fasting day IS plausible.