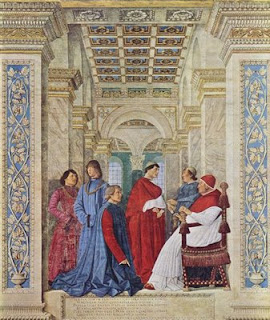 I was watching a TV programme about a royal chef who supposedly had written the first ever cookery book, The Forme of Cury. He worked for the famous epicure, King Richard II, and the recipes are of the sort of 'Take one Leoparde, and smite him; pluck and draw three Brace of Peacocke and stuffe hem upp the Lepparde and seethe for six monthes." I thought at the time that this was really unlikely to be really the first cookery book; my mind went straight to Apicius' De Re Coquinaria, written in the fourth century or so, which encourages one to eat things like dormice cooked in mulsum and fish sauce. Interesting, certainly, but I was most pleased today to come across a gentleman called Bartolomeo Platina. He was, of all things, the Vatican librarian under Pope Sixtus IV, which is to say, in the last half of the fifteenth century. He seems to have been a man of considerable bad temper, which got him into trouble more than once. He wrote a treatise against unwise love affairs, a serious history of the popes (the first to be written, and positively slanderous against his enemy, Pope Pius II) a history of the Gonzaga family and, most important, a cookery book called De honesta voluptate et valetudine, or Honest Pleasures and Health. Here's one recipe:
Integrum haedum aut quartam partem, tessellis laridi et spicis mundi alii circumquaque impacti, veru ad ignem volvito, humectatoque cum ramusculis lauri aut rosmarini, ex hoc quod nunc scribam condimento. Cum acresta cumque iusculo pingui duo vitella ovi bene agitata, duas spicas alii bene tunsas, modicum croci, parum piperis misceto in pastellamque indito. Inde, ut dixi, quod coquitur aspergito. Coctum in patina ponito, partemque conditurae infundito, ac petroselinum minutatim concisum inspargito. Hoc obsonium bene coctum cito comedi debet, ne refrigescat; hoc non edat caeculus, quia oculos hebetat, veneremque et demortuam excitate.
My rough and ready translation:
Take a kid, or a quarter of a kid: lard it with bacon and garlic cloves and turn it on a spit before the fire. Using a branch of bay or rosemary, sprinkle it with the sauce which I shall now describe. Take some vinegar and fat broth mixed with two beaten yolks of egg, two cloves of well-crushed garlic, a little saffron, and a little pepper, and mix them all in a pan. Then, as I said, sprinkle the cooking meat. When it is cooked, put it on a dish, and pour over the remaining sauce and sprinkle with sprigs of chopped parsley. Eat the dish quickly while it is hot, and don’t let it get cold: my little blind friend won't do so [a joking reference to Filippo Buonaccorsi, a friend of Platina], because it dulls the sight and stirs up lust and weakness.
The picture shows both Platina (kneeling) and Pope Sixtus.
Posted by Pastor in Monte at 17:50

Don't think my local Co-op stocks kids - or even quarters of kids! Fascinating all the same. I don't think Fr Z has had this on any of his menus - yet!

I have an early 18thc. cookbook that has a recipe for stuffing a swan with different birds of diminishing size. The book also includes remedies, including several for being bitten by a mad dog and one for syphilis. The author says that 'he and a number of gentlemen of his acquaintance have benefited from the treatment'!

It stirs up lust ! I don't think I've seen that suggestion before.

Was it Samuel Johnson who once opined that men while smoking peacefully are unlikely to indulge in violence or fornication. I can't trace the allusion.

Whoever said it, it sounds like a good reason for a smoking a cigar after dinner.

There is an excellent book available called "Delizia! The Epic History of the Italians and Their Food" by John Dickie.

Dickie attempts to trace the origins of the hedonistic delight which is Italian cuisine today from medieval times (with some references to ancient Rome).

It's a good read and includes such interesting titbits as the Cardinals being limited to bread and water during the election of a new Pope in the mid 16th century to hasten the proceedings!

Dickie also devotes a section to Platina, as well as a gentleman cald Agostino Artusi, who wrote the first recognisably modern Italian cookbbok in the 19th century, and who considered a sort of Italian Mrs Beeton. He finishes the book with the Slow Food Movement, an excellent organization which promotes artisanal cooking and food preparation, and rails against fast food and increasingly bewildering health and safety regulation (for example the use of unpastuerized milk in cheese production).