Ireland is such a photogenic place: I thought I would entertain you with a few Irish cliché shots; sorry about the quality; they were simply taken a few days ago with my iPhone3.

This is Kilmacduagh, on the borders of Counties Galway and Clare. A beautifully preserved monastic ruin with an intact round tower, it is famous for the ministry of St Colmán. Behind, you can see the Burren, an extraordinary area of bare limestone Karst landscape, where arctic and tropical plants grow happily side by side. 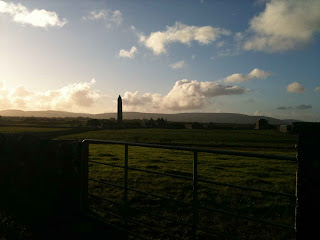 Here's a typical Burren hill, technically a 'Karst dome' striated with levels of limestone, looking as if it dropped from the moon. The most famous Burren hill is probably Mullagh Mór, about which there was a huge row a few years ago. The name simply means 'big hill', which is probably a relic of the nineteenth century when, it was said, geographers began to map the area. Somebody from the Ordnance Survey simply pointed to the hill and asked a local 'What's that?' He or she would have shrugged and said 'a big hill, of course', and 'Big Hill', Mullagh Mór, was inscribed on the map for all time. 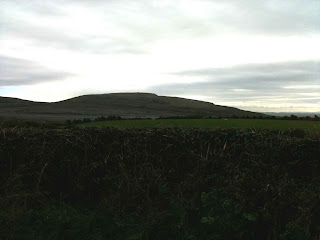 Ruined monasteries, churches and chapels litter the Irish countryside; if they were not turned into Protestant churches, they would be unroofed, the locals driven to Mass rocks for worship. Now many of the Protestant churches stand without roofs too. Burials inside the walls began very soon; all the former Catholic churches are full of graves. This is the little chapel at Coad (pronounced Cood) a townland (Irish countryside is rigorously divided into townlands) near Corofin (variously spelled). The grave below the East window, according to local lore, belongs to Máira Rúa (Red Mary) O'Brien who lived scandalously in nearby Leamaneh Castle; married three times (reputedly she killed one by pushing him out of a window), including once to a Cromwellian soldier in an attempt to retain the castle after the invasion, it is said that when the devil came for her soul, he stamped his foot on her gravestone, which is why it is broken in three. 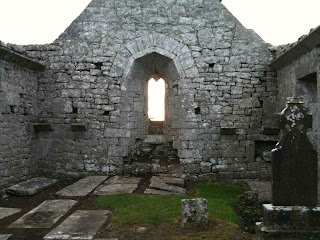 I saw this sign on the wall of a petrol station, and was highly amused. Only in Ireland might one assume that anybody would conceivably drink four cups of tea in succession and still be ready for a fifth! I have been told that the Irish drink more tea per head of population than any other nation on earth, and I can quite believe it. I can put away at least two pots every day. 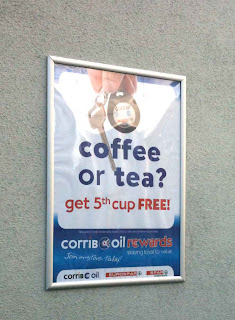 And, finally, you might recognize this house. More commonly known as Craggy Island Parochial House, it is in fact a simply farmhouse just off the Burren, which area was used for filming Fr Ted. The picture of the Karst Dome above is the view from this house. It looks so strange; basically a town house stuck in the middle of a field in the back of beyond (and it is really, really, remote). 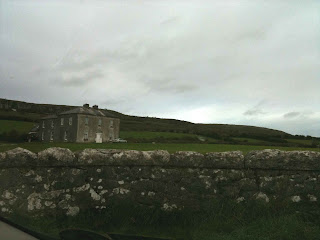 An' there's more Fr Sean but ye'll have to wait!!

A fifth cup of tea, Father? Sure that'd be no problem at all, at all...

When I left Ireland and removed to England back in the 60's, it was to my chagrin that I found so many restaurants had succumbed to the American practice of using tea bags. Horrors!

There was one chain, however, that still provided you with an actual pot of tea (can't remember the name any more). On my trips into London I made sure to frequent that one. However, as the pots were rather small, I invariably had to order a second one to acquire an appropriate 'tea-fix'.

However, given the celerity with which the second pot was produced I was doubtful as to whether they knew to 'scald the pot' first...

as for ruined Abbeys not forgetting Fore Abbey in Co. Westmeath and the Seven Wonders of Fore:

The monastery built upon the bog.
The mill without a race (Lough Lene water flows from the hill).
The water that flows uphill.
The tree that has three branches/the tree that won’t burn.
The water that doesn’t boil.
The anchorite in a cell
The lintel-stone raised by St. Fechin’s prayers.