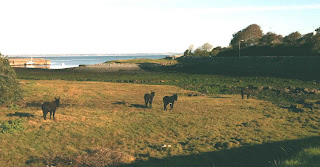 I've (briefly) been in Ireland again. I managed to take a single picture that has just about as many clichés as one might find in one place.
1) Donkeys
2) Thatched cottages—unfortunately in a lot of shadow on the right
3) Bog
4) Seaweed — Dulse and carigheen are both eaten
5) The quay and boat (for emigration)
6) Galway Bay (though it was mid-morning, not sunset).

It's Ballyvaughan (variously spelled) on the edge of the Burren in County Clare, and the thatched cottages are, alas, for the benefit of tourists rather than the real thing. It's a pretty little town, though.

The road around the Atlantic coast from Ballyvaughan to Lehinch (also variously spelled) is one of my favourite routes of the world. At Black Head I turned the engine off and got out of the car. The day was completely still, barely a ripple on the surface of the Atlantic. An approaching roar was only the sound of the tyres of another car, sounding extraordinarily loud in that silence and then fading into the distance.

I took two photographs which I have inexpertly photoshopped together. That's Black Head on the right, with Galway on the other side on the right (and Galway Bay in between, of course), with Connemara around the middle. Over on the left, you can just make out two of the Aran Islands, Inismor and Iniseer (also variously spelled). In the foreground, you can see the characteristic bare Karst landscape of the Burren, with those strange boulders lying around all over the place; Glacial Weirdnesses or Royal Peculiars, or something. Though the place looks very barren, it isn't at all; between the rocks is very fertile soil where nutritious verdage grows to nourish the animals farmed on the Burren since prehistoric times. Corcomroe Abbey, not far away, was known as St Peter's of the Fertile Rock in consequence.

The road goes on round to some of the most stupendous cliffs in Europe, the Cliffs of Moher. This is not my pic, but one I found on the web—I had to take a cut home as we were going to see my cousin in Limerick. The cliffs are quite breathtaking, especially when the weather is rough. There is a spring in the cliff face, pouring out and down the precipice, and I remember once when the wind was strong off the Atlantic that the blast blew the water high up in the air and back over the cliff onto the land—fabulous! 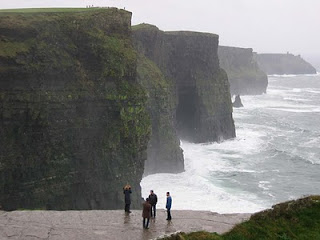 My Grandmother was from Lahinch!

Oh really! That's splendid. I have such happy memories of Lahinch as a child.
Thank you for telling me.