Well, it's one of those situations when we don't know what the future will hold. When his name was announced last night, there was none of the excitement that was attendant on the naming of Ratzinger, just puzzlement. Who?

At first glance he reminded me of Pope Pius XI in appearance; shortish, stoutish and with glasses. But we can't judge a book by its cover. What was apparent was that none of the bling laid out in the Room of Tears came out. Not even a rochet, let alone a mozzetta. His pectoral cross was the one he wore as Archbishop of Buenos Aires.

And those opening words; 'Buona sera', the equivalent of 'Hello'. Bathos indeed, after all the fuss. And then he just stood there, with barely a wave, looking a bit like a rabbit in the headlights. Time will show whether this was simply sheer fright or part of his calm, unhistrionic, style.

I was rather impressed with his words, if only because they were so artless. This was not a man who had memorised his acceptance speech, like a luvvie at the Oscars. The words came from the heart, and this made up for what he lacked in eloquence. Asking that people pray with and for him was a genuine good idea —meaning both genuine and good. And a good beginning, especially as there was no extempore ramblings, but simply the traditional Our Father and Hail Mary. I would have been happier had these been in Latin, but he was, I think, stressing that he is first and foremost the Bishop of Rome. Indeed, he used no other title.

Back home in Argentina he would appear to be a controversial figure. Many love him for his unfeigned charity, some (especially both the Kirchners) detest him for his firm stand on Catholic teaching. I gather that many of his Jesuit brothers are not keen on him, firstly for the firm way he administered their province when he was in charge, secondly for his refusal to support Liberation Theology, which some of them interpreted as support for an oppressive military dictatorship.

Somebody in the UK is bound to spot soon that he has spoken in favour of Argentina's claim to the Falkland Islands—but then he is Argentinian, and perhaps this is to be expected. And perhaps if asked he might say that indeed the Malvinas should be 'returned' to Argentina, but when Patagonia is given back its independence, and the lands taken from Chile and Uruguay returned. For now, I noticed that the BBC last night interpreted his taking of the name Francis as meaning that he was 'an animal lover.' Which tells you all you need to know about the BBC, anyway, but nothing about Pope Francis.

Some on the net have been horrid (really horrid—so horrid and uncharitable that I'm not posting links) about his lack of liturgical style. Yup, I don't imagine we will be seeing the return of the tiara any time soon. He's not a fan of the Extraordinary Form, but he does appear to be a genuine fan of Pope Benedict, so I don't think he'll be reversing any of his liturgical decrees. Just don't expect red shoes or white Paschal mozzettas. Still less a deal with the Society of St Pius X.

As for what everyone seems to think necessary, will he reform the Curia? Reform of the Curia is something that has been a kind of a mantra since the 1960s. The 'Vatileaks' scandal has suggested very powerfully that now something badly needs to be done; it may well have been the event that precipitated the resignation of Pope Benedict. Pope Francis is not a curial insider, but he has served on several Curial commissions as Cardinal and showed himself an able leader of one of the Synods in, I think, 2001. His time as Jesuit Provincial has showed that he is no push-over and, while unquestionably kindly, he is capable of firm, though unshowy, action. If I had to guess, I would say that there will be no heads rolling, but we should expect a gradual clear-out over the next five years or so. Even if what has come to be known as the Sodano party is right in thinking that little needs to be changed, the worldwide perception is that change is essential, and this is important for the credibility of the Holy See and the Church more widely. At the very least there needs to be a proper and transparent mechanism for dealing with the abuse cases around the world. As Tim Stanley wrote, the trouble is that the Curia function much like the Italian Government, and the Italian Government doesn't even work in Italy!

A friend on Facebook alerted me to this article from the Catholic Herald at the time of the last conclave; it is about the then second-placed Cardinal Bergoglio, and tells us more than most other sources. 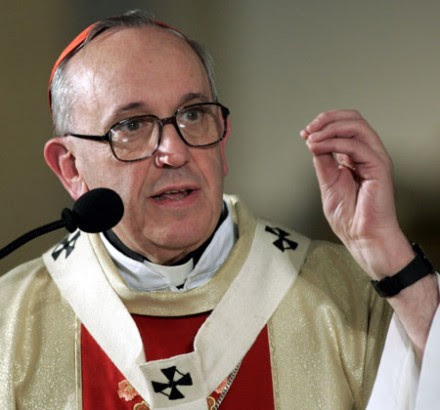 I was watching La Repubblica’s live coverage of the terza fumata and was getting quite annoyed that, once the white smoke appeared, all the commentators assumed it would be Cdl. Scola – even to the extent of opining about his choice for Secretary of State!

I agree Father about the scurrilous comments on a certain traditionalist website. As a traditionalist myself I found that embarrassing and want no part of it. It was character assassination of the worst kind. We don’t need to blame the anti-Catholic elements in the world when our own co-coreligionists act like this. Shameful!

The choice of the name Francis was not by happenstance either, I suspect. I also immediately thought of Our Lord’s words to St. Francis: “Rebuild My Church!”

It is good also to recall the criticism heaped upon Cardinal Ratzinger at his election eight years ago. We may be in for a few surprises. Regardless, I believe we get the Popes we deserve, not necessarily the ones we would choose.

I imagine that if Our Lord had left it up to the Apostles to vote on the first Pope, St. Peter might not have been the front-runner! Man proposes…