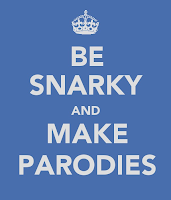 Yes, yes, yes, I get it, and I feel it too. He isn't Pope Benedict, and I badly miss the Pope Emeritus. But everyone has strong points and weak points, and surely Pope Francis must be given a chance to contribute his many gifts? I am quite upset at the snarky comments circulating around, especially from those who should know better. Do people think that by undermining the Holy Father, by stirring up bad feeling, they are somehow helping the situation, or are they hoping for a recount of the votes in the conclave? Whatever happens, he will be our principle of unity for the next several years; so let's be unified, and back the man until (highly unlikely) he does something that we cannot back. I hate this backstabbing just in case, finding fault and almost hoping for the man to put a foot wrong just to prove us right.

Remember, grace builds on nature; the Holy Father is a man of his generation; that does not make him a heretic, though it might colour his expressions of the faith. Had I been a Jesuit ordained in 1969, no doubt I would have looked at the Church and the world differently. Things will look very different again to a Holy Father ordained in, say, 2000.

And secondly, I personally would not like to be judged on every ill-considered remark I have made in the course of my life. No doubt I have made lots. Pope Francis needs to be judged on what he does as Pope Francis, not on the things he might or might not have said to his mates in Argentina over a couple of beers, when such comments did not matter so much. That they retell them now says more about them than about the Holy Father.

He seems to be making the New Evangelization his priority. And, looking around me, I can't see a stronger need.
Posted by Pastor in Monte at 19:01

Well said. It is with deep regret that I have to say that several friends have told me that their experience with those who consider themselves "traditional" is as follows: as long as you say the things they like, then you are fine, orthodox, etc. but the moment you disagree with them they can become quite disagreeable and even abusive. Thank you for your observations.

I am appalled at the frankly unChristian comments of many who contribute to Trad blogs. It is very worrying - what arethese people thinking about? Father, I am glad you are prepared to be positive. Thank you.


I think it is very upsetting and distressing to see such concern and foreboding about Pope Francis, before he has even been inaugurated. He has been chosen for a great task, as Christ chose St. Peter, under the guidance of the Holy Spirit. There have always been tensions in the Church, and differences in emphasis, and I think we should all accept the priorities which he chooses for this particular time in its history.
(This Comment has been posted on another blog discussing the same subject)

I agree completely Father. I have been shocked and saddened also by some of the comments I’ve read and how people are watching every gesture and move he makes to draw intemperate conclusions about his papacy.

Perhaps we put too much emphasis on - and expect too much from - individual Popes. The secular world looks on a Pope like a new head of state, opining about whether he will change this or that doctrine – as if he could! We know better.

After the adulation and ‘rock-star’ enthusiasm for Pope John Paul II, Pope Benedict sought to divert attention from himself and direct people’s focus to the real Head of the Church, Jesus of Nazareth. Pope Francis already shows us the same emphasis. It is not about him, but about Him.

His style will be different – just as was his namesake’s many centuries ago. That may make some of us uncomfortable, as he shakes us out of complacency and emphasizes the simplicity of the Gospel and the obligations it imposes on us if we are to be truly followers of Christ.

I have lived to see seven Popes and I have loved and respected all of them – in different ways and for the gifts each has brought to the Church – but primarily because each was Christ’s Vicar on Earth, seeking to lead all of us to Heaven.

As far as his liturgy is concerned,
(1)I think the removal of the Offertory Procession from his Mass of Inauguration was a splendid piece of guidance to the whole Latin Church; and
(2)I like his elimination of the queue of privileged people who received Holy Communion from the Pope. I always felt a bit nervous that they might be thinking more about the Pope than about their Eucharistic Lord.

At the Mass in Santa Anna he also left the distribution of Holy Communion to the deacons. It was a nice touch too that Pope Francis invited the Franciscans of the Friary of Mt. Alverna near Assisi to serve at the Mass of Inauguration.

I think in the past that task might have ‘automatically’ gone to the seminarians of the North American College, the proximity of which to the Vatican seems to often put them in the front row seats. They did get a look in though, with the seminarian leading the Prayers of the Faithful - though he is Australian.

Pastor, I've awarded you a Liebster Award - see here http://ccfather.blogspot.co.uk/2013/03/the-liebster-award-helping-blog.html Onerous, but may result in some new people passing by...

Ben, you are most kind, and I truly appreciate it. But in Holy Week, all the homework it requires somewhat daunts me!