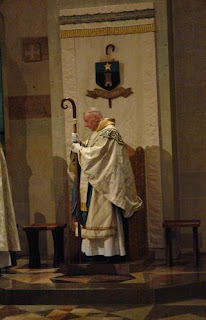 In a talk he gave in Paris in 1977, raising funds for his new monastery Dom Gérard commented:

Recently an agnostic, faced with our foundering civilisation in thrall to liberalism ("to every man his own religion", and so "to every man his own morality":- you see just how far that can go!) and to materialism ( a two-dimensional universe without after-life or a beyond) remarked: "You monks, you are the most useful members of society." We retorted: "How can you say that if you believe neither in God, prayer nor heaven?" He replied; "Because we are witnessing a haemorrhage of values, a continuing evolution where everything is questioned, a real collective suicide. Now amidst the general rout you monks are witnesses to the permanence of values. And make no mistake, the day you cease to be uncompromising you will interest us no longer."

Dom Gérard's 1977 talk here
Le Barroux website here
An interview with Dom Gerard, telling of his break with the Pius X Society here.
Posted by Pastor in Monte at 10:29

What a splendid and interesting post.
Thank you, Father.

I knew that "the changes " had driven Dom Gerard Calvet out of community life, but I don't think I had realised he had lived the life of a hermit for a short while : not unlike St. Benedict himself, in a sense !

I remember reading that young men were becoming attracted to the traditional community life and in fact would not take no for an answer !

And so, slowly, painfully, Le Barroux was born.

People at the time were beginning to talk of the block headed attitude of the Church authorities, and I would not gainsay them.

In God's good time, things came right, but it seems to me
a certain froideur towards Le Barroux and Fontgombault still lives on in the Solesmes congregation.

Be that as it may, Tradition is here to stay.

And men like Dom Gerard Calvet (with the help of God, of course) kept the flame of tradition burning.

It will be a happy day for England when a traditional monastic community is established here.

I believe it will happen one day and what a blessing it will be for England !