Baroque around the Clock 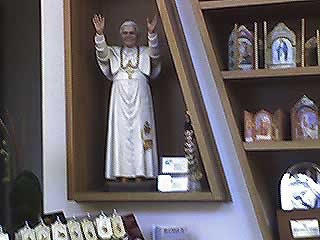 One encouraging thing in Rome was that, whatever might have been happening in St Peters, the Holy Father is having his effect further down the line. One has always seen nice things in the windows of Gammarelli's, ('Splenditatis Vendor'), but now the windows of the various merchants in the Via dei Cestari and other ecclesiastical suppliers have burgeoned with Roman chasubles and lace, where once there was only lurex and itchy knickers for nuns.
Several of the assisting clerics at the Sunday Mass in St Peter's wore proper lace, not the rather restrained box-pleated albs and cassocks with a single strip of insert lace approved in the Noe/Marini mk.1 era. I noticed that they (and the Holy Father) also did so at the Good Friday Liturgy—I actually thought that a little inappropriate.
The picture shows a less happy addition to the holy-things shops. One might reasonably expect statues of John Paul II, but it seems you can already buy ones of Pope Benedict. Don't bother; they are pretty horrible, as you can see even in this pic which I took with my phone.
Posted by Pastor in Monte at 16:43

once there was only lurex and itchy knickers for nuns.

!!! Father I am shocked that you would refer to such items of apparel. I thought this was a respectable blog!