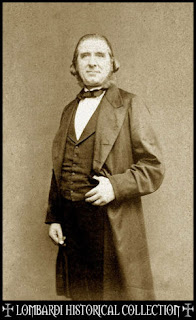 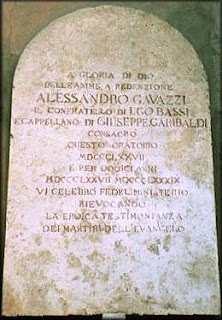 Garibaldi was not, of course, a very popular man with the Church. The Janiculum hill is pretty well given over to commemorating him and his fellow freemasons who overthrew the Papal States in 1870. There is a very dramatic statue of his wife on horseback brandishing a gun in one hand and clutching a baby to her breast with the other. One lesser-known fact is that Garibaldi had a chaplain. Still less well-known is the fact that he was, er, a Methodist! His name was Alessandro Gavazzi, 1809-89) and he is commemorated on the outside wall of the Methodist church in Rome, just over the bridge from the Castel S. Angelo. He had been a Barnabite monk, but had left and, having participated in the short-lived Roman Republic in the 1840s, fled and joined the Methodists in London, returning to join 'Biscuits' Garibaldi's army as a chaplain, and founding the Christian Free Church ('Chiesa Metodista') which still exists, I think, though hardly huge.
Methodism isn't exactly what springs to mind when you think of Italy, but it does have its own Protestant church, the Waldensians. Actually, the Waldenses, a northern phenomenon, predate the Reformation, but they were happy to join in as soon as they could. I don't think these guys are Waldenses, though; on their sign they identify themselves as Methodists. I suppose we are simply going to have to think of it as one of those things… unless any of you have any more information, of course.
Posted by Pastor in Monte at 17:02

As a seminarian in Rome we would occasionally visit the Church of Scotland Manse on the Via XX Settembre and one of the other guests was usually the Methodist minister. As I recall he wasn't Italian, I think he was Dutch or Belgian, although I can't be sure of that. I do remember that he was bitterly anti-Catholic, although not openly so, but you could tell from what he said. I remember some of our priests having to move away from him to avoid "physical ecumenism"!

Garibaldi stayed in a house which is part of my school. The headmaster has his meetings in the 'Garibaldi Room'. I don't think he's planning to overthrow the Papacy though...