More news from the Orkneys 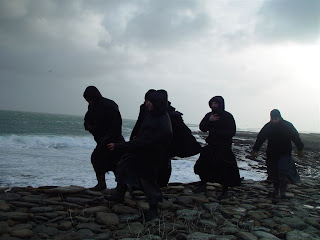 The Transalpine Redemptorists have now publicly confirmed that they are beginning to investigate seeking an accommodation with the Holy See. A friend in Rome told me that he had seen them there on two separate occasions in recent weeks: I did not like to publish this fact for fear of putting their efforts in peril. The same friend has sent me this link (thanks!) which tells of the T.Redemptorists' efforts to, on the one hand open the doors of possibility with Rome while, on the other hand, not shutting the doors on the Society of St Pius X et al entirely. I fear that the latter may not be possible—reaching an accommodation with Rome will almost certainly be seen as a betrayal by many in the SSPX (Bp Williamson at the very least), but were it possible to establish a sort of bridge, as the TReds seem to want to do, it could be very helpful indeed for the future.
Perhaps you could put a comment on their blog (at the link above) encouraging them and promising your prayers.
I see also on their blog that their seminarians have had to be withdrawn from an SSPX seminary over this question.

one of the three Brothers was called to the Rector’s office. During the course of the interview the Rector suggested that possibly the only way to stop me from carrying out negotiations with Rome was by threatening to start up a breakaway community. This suggestion was also repeated at another time to all three Brothers.
I later received an email from the Society saying that if we made an agreement with Rome, our seminarians would not be welcome in any SSPX seminary.

Well, the SSPX position seems pretty clear. How sad.
Posted by Pastor in Monte at 10:18

I don't think the SSPX position with regard to the Transalpine Redemptorists is altogether surprising.

We know the reaction of the SSPX to the FSSP, the Benedictines of Le Barroux, and other "Ecclesia Dei" communities who "compromised" with Rome.

We also know the SSPX's reaction when Bishop Rangel and the Association of St. John Vianney, Campos, Brazil, was reconciled to Rome in 2001, and became an Apostolic Administration.

It was felt by the SSPX that Bishop Rangel had betrayed the three bishops of SSPX who had consecrated him in 1991, and tha he too had "compromised".

There will be a similar sense of betrayal within the SSPX if and when the Transalpine Redemptorists are fully reconciled to Rome.

Whether all communication between them and the SSPX will be severed remains to be seen.

After all, Rome has not actually shut the door on the SSPX.