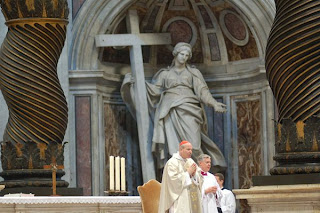 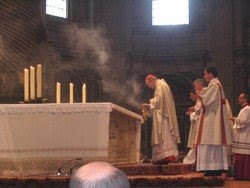 I attended the main 10.30am Mass in St Peter's Basilica on Sunday. It was interesting (in a disappointing way) that the style of Marini MkI is still very much to the fore. The Mass, celebrated nicely by Cardinal Schönborn, was at the Papal Altar, furnished with groups of three short candles at the corners. No frontal. The sole concession to Pope Benedict's new style was the presence of a short, shabby, wooden cross in the middle of the altar. The Cardinal sat enthroned in front of the altar in the Pope's place; the offertory gifts were brought just as if he were the Holy Father; in other words, the brightly-clad Korean women knelt before him at his chair while he touched the gifts and blessed them. I also noticed that he was made to sit down every time his mitre was taken off or put on. It looked most awkward. One concelebrating bishop sat with the lappets of his mitre still folded over the front; he looked like a tired rabbit. Does every bishop get treated just like the Pope in St Peter's, even if he is a cardinal?
The thing that I find increasingly annoying is the treatment of the 'throne' as a simple chair to sit down on. There is a great deal of important theological significance to the diocesan bishop's throne and, much as I admire Cardinal Schönborn in many ways, he should not be sitting where the Pope sits (and even though, actually, I think the Pope too should have his throne elsewhere), though of course, the Cardinal can hardly be blamed for what the MCs make him do.
The music was somewhat disappointing. Bits of Missa de Angelis, Credo III, the Pater Noster were in plainchant. At the offertory and communion were a couple of pieces in Italian that sounded somewhere between Paul Inwood and John Rutter. The offertory one was quite nice. But there was nothing classical at all.
And the final grump is that most of the Mass (except the Preface, Canon and Pater Noster) was in Italian. Actually, the first reading was in Spanish, and the second in something Slavonic. Again, I can see an argument that in St John Lateran, the Cathedral for the diocese of Rome, the local people's language might be appropriate. But St Peter's has an international significance. Only Italians speak Italian; it is in no sense a lingua franca outside Italy. At a serious international Mass, not to make the Mass substantially Latin is absurd. Especially absurd is the practice of reciting the Prayers of the Faithful in six or seven different languages. If one is expected to say amen to something, it has to be the prayer of the Church or one must understand it. Would it not be more sensible to have a standard form, like a litany, in Latin, on these occasions? How can I say amen to a gabble of Croatian or Armenian? I'm sure it's saying something nice, but effectively it's meaningless as far as I am concerned.
The occasion, by the way, was the closing Mass of a congress all about the Divine Mercy.
Posted by Pastor in Monte at 12:08

Many thanks to Father for this photo.

I am very sorry to see the Cross and tall candles had been removed from the papal altar in St. Peter's.

That is a retrograde step. It hardly seems part of the Benedictine reform.

As to the use of the papal altar, I had thought it was reserved to the Pope himself, unless he had given permission for its use by someone else, or am I wrong about this ?

In any case, it seems to be another retrograde step. It sends all the wrong signals.

The liturgy sounded uninspiring, to say the least. It sounds very similar to the sort of liturgy one could expect in St. Peter's in the 1970s.

As to the use of Latin, I seem to remember Pope John Paul I celebrated in Latin when he took possession of St. John Lateran in 1978, so things today still seem to be on the slippery slope.

Pope Benedict must have plenty of critics in Rome itself. A pity.

It is disappointing but hardly suprising and at the end of the day not worth a sleepless night fretting over. It's hardly a betrayal. But is it a pointed repost to the Pope either by the cardinal or those organising the Mass or by someone in St Peter's who wishes to make a point? What I find very interesting is how these things actually happen. Did someone have to say, " please remove those tall candlesticks and cross, we've brought our own, thank you very much"? Or does the sarcristan of St. Peters ask, " How would you like the altar to be set up?" or is there a directive which says " The High Altar is to be set up with six candlesticks and with a cross in the centre" and this is the cardinal's, or indeed someone else's take on that.

Father Sean, I was lovely to see you at Vespers at St. Peters! I would have sent an email but could not find an email link on the site. Hope to see you again the next time I am in England.
Father Cyprian

Good to see you too, Fr Cyprian. I suggest you make another comment here (which I won't publish) with your email address, which I can then write to. For obvious reasons, I'm reluctant to put up my own private address for all.

I agree Father on the use of Latin at Masses of an international flavor at St. Peter's (or any other Catholic church for that matter).

Apropos of that, do you know in what language lectures are given at the Pontifical Universities in Rome these days...?

When I was there in the early 60's all lectures were in Latin. I suspect that may not be the case any more. Italian, perhaps?

But then Cardinal Schönborn is not showing himself off as much of a conservative or a trad in allowing dubious exhibitions to continue on his own diocesan property. Perhaps it was he who chose how to dress the altar.

I suspect that behind the high-profiled liturgical appearances of the Holy Father there is sullen resentment behind the scenes and within the Curia provoked by his reforms. Who is the Cardinal in charge of St Peter's?

Apparently Cardinal Comastri was appointed Archpriest of St Peter's Basilica in 2006. How much power does he have in ordering the ceremonial? Or is it left to Mgr Marini, the Pope's Master of Ceremonies?

I'm amused at what you say regards the prayers of the faithful. If they sound like they are politically correct twaddle I simply refrain from saying "amen."