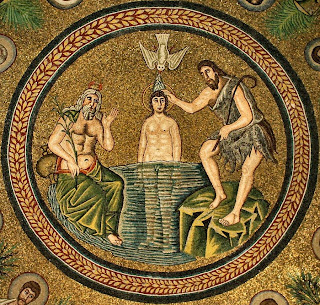 I have been thinking recently upon Baptism. I love baptizing; it is one of the most unalloyedly joyful sacraments (except when the catechumen is in the terrible twos; too young to know that he or she doesn't want to be baptized, but plenty old enough to know that he doesn't want his hair wet).
I saw a baptism on Shoreham Beach the other day; a group of black people in nighties were in the sea. When I noticed what they were about, I stopped my walk and remained on the beach out of respect for the Sacrament until it was over and the figures emerged from the waves, shivering in the sharp wind. I gave a surreptitious blessing and went on my way.
Here in Shoreham there is a sort of blow-up pool that circulates among the free churches; I think it belongs to the Baptists. The Baptists hold that for validity, baptism has to be by full immersion, being let down backwards, the formula uttered being either that of the Trinitarian invocation or some other symbol of the faith of the candidate. Here's one account:

Baptists insist upon baptism by full immersion, the mode Baptists believe Jesus received when he was baptized by John the Baptist. The candidate is lowered in water backwards while the baptizer (a pastor or any baptized believer under the authority of the local Baptist church) invokes the Trinitarian phrase found in Matthew 28:19 or other words concerning a profession of faith. Baptism by immersion is a representation of the death, burial, and resurrection of Jesus.

For purposes of accepting transfer of membership from other churches, Baptist churches only recognize baptism by full immersion as being valid.[3] Some Baptist churches will recognize "age of accountability" baptisms by immersion performed in other Christian churches of "like faith and order," while others only recognize baptisms performed in Baptist churches. Baptists are known for re-baptizing converts to their faith who were previously baptized as infants or small children. Because of this, the first Baptist congregations were dubbed "Anabaptists" which means re-baptizers.

from here.
There are several curious points here. What does validity mean in this context? If the ceremony cannot convey grace, or change the state of the person, then what means validity? Secondly, I'm not sure that I go along entirely with this total immersion theory. I know it's fashionable right now, and that the East does so, and presumably has done so for a long time. More in a minute. Third, the alternative invocation clearly would invalidate a baptism from our point of view. I had always thought that Baptist baptism was pretty watertight. As it were.
Back to total immersion. Is is really the ancient practice? Consider those ancient baptisteries that have been dug up in the East. They really aren't large enough for a person to lie fully prone, and especially not without bumping his head. The sole argument that total immersion is the only Biblical method comes from the baptism of our Lord, that he went into and came out of the water. (Mt 3:16).
Okay, I'm prepared to accept that certainly people went into and came out of the water, as out from a tomb. Ancient fonts have steps. But think of those ancient representations of our Lord's baptism, such as at Ravenna. In all cases he stands up to the waist in water, while John pours water over his head. In other words, the baptism is by affusion, not immersion. Just as we do, in fact, except that we don't make people stand up to the undies in water. My suspicion is that this is the ancient universal practice, given the small size of floor-fonts and the iconographic evidence. Is there any ancient evidence for full-immersion baptism, other than in presumption?
This Easter, God willing, we should have no fewer than nine baptisms, seven of them adult or teenaged. Do say a prayer for our wonderful catechumens.
By the way, should you wish to attempt a full-immersion baptism of a baby boy, be very aware that the shock of the cold baptism very often causes the child to urinate forcibly. I have known a couple of cases of this, causing embarrassment to some and amusement to others. I have never risked this.

HaHa, regards your last paragraph. My girlfriends who had baby boys were always very careful to change the boy's diapers with their, uh, "member" facing AWAY from them i.e. with the head of the baby closest to them. [10-1 the Russian orthodox priests probably point the child atthe person in the baptismal party they least like. :-D

As to Baptists, I gather that they do it that way based on the word itself. In any case the "baptism" of the Lord is, of course a different act than how a person today would be baptized. Jesus had no original sin, so of course his own Baptism was merely that -- an immersion, and not a sacrament. Baptists, as far as I know, don't believe in sacraments anyway. "Ordinances" but not sacraments, even though if they use the right formula, that's what they effect.

My question is thatI know that anyone (not even a christian) IF he has the right intent and uses water and the right formula may baptise someone.

Father's post has reminded me of a visit I made to Poitiers a few years ago where there is a very ancient baptistery in the town.

I have just refreshed my memory by looking up details and photographs. The actual pool is the size of a jacuzzi and surprisingly it adds that it was added in the VIth century when full immersion was the norm.

As far as I can remember I don't think it was all that deep so full immersion must have been a case of horizontal dunking.

I am so glad full immersion was not the norm when I was received into the Church otherwise I might have had to change my mind! And as for getting baptised off Shoreham beach - I could no more do that than I could fly.

I gather that in some countries Baptism in the sea is illegal. Sorry, I can't remember where I read that. Has anyone else heard of this restriction?

Don't know about that Jane, regards the illegality. I'd check out those Muslim countries as the first suspect though.

I remember reading that after the Soviet Revolution they'd blown up the church of Our Savior in a fit of atheistic hysteria - but Christians (usually of the Baptist persuasion, but others as well) did clandestine baptisms in the municipal swimming pool which had been built on the site.

I also remember seeing pictures of structures[?}/pools built for the purpose of adult Baptism in ancient times. i.e. stone block construction, with a way to let in and empty the water, with steps leading in and out. I think Immersion or at least ducking down in it must have been not uncommon -- the Catholic encyclopedia mentions that deaconesses used to help, apparently, with baptising women.

"Functions of deaconesses
There can be no doubt that in their first institution the deaconesses were intended to discharge those same charitable offices, connected with the temporal well being of their poorer fellow Christians, which were performed for the men by the deacons. But in one particular, viz., the instruction and baptism of catechumens, their duties involved service of a more spiritual kind. The universal prevalence of baptism by immersion and the anointing of the whole body which preceded it, rendered it a matter of propriety that in this ceremony the functions of the deacons should be discharged by women. The Didascalia Apostolorum (III, 12; see Funk, Didascalia, etc., I, 208) explicitly direct that the deaconesses are to perform this function. " Full article here.

Portsmouth Anglican Cathedral has a walk-through font under the chancel screen and organ. The idea is that at the Easter Vigil they should do the first bit in the nave and the Mass at the east end and do the baptisms as they are going from the west end to the east end. I can see some logic in this. I think it was thought up by a liturgically minded Dean who then became bishop of Salisbury and heavily involved in creating the Common Worship series of books.

On validity in this context: if one approaches this question from a voluntaristic point of view (as one in that tradition might)then validity would be determined by exact conformance to God's will in the act. As nominalism seems frequently to accompany voluntarism, the lack of any notion of grace would not be troubling in this context.

Recall that one of the Byzantine Emperors was surnamed Constantine Copronymous for a reason: as a babe brought for baptism, he crapped in the font, and was never allowed to forget it!