By hook or by crook 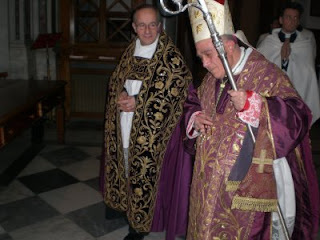 Nice to see this picture of Archbishop De Magistris ordaining some members of the Good Shepherd Institute in the traditional place for Roman ordinations—the Cathedral of Rome, St John Lateran.
But what doesn't look very traditional to me is that the Archbishop is carrying a crozier. I was told that, until the 1960s, nobody carried a crozier in Rome, not even the Holy Father (though I believe an exception might have been made for the consecration of a bishop when the consecrand was presented with a crozier as part of the rite). Perhaps the Arch is just taking advantage of the modern custom.
n.b. Zadok the Roman has kindly written a comment which explains.
Posted by Pastor in Monte at 17:22

One of the commenters over at The New Liturgical Movement says the following;

An ordaining Bishop who does not have jurisdiction will use the crozier (as the Roman Pontifical positively commands it for Ordinations) for the blessing of the ordinands during the Litany, for the admonition and blessing of the new priests after Communion, and the imposition of the penance, but not during Mass.

Was there a custom (perhaps outside of Rome) that if the bishop did not have jurisdiction, he held the crozier the other way round, with the crook facing himself rather than anyone else? I seem to remember being told this by a visiting English-speaking bishop when I was in Saint Joseph's, the "Mission anglophone" in Paris.

I think that the crozier facing the bishop himself is a sign that he's an Abbot, symbolizing introspection?